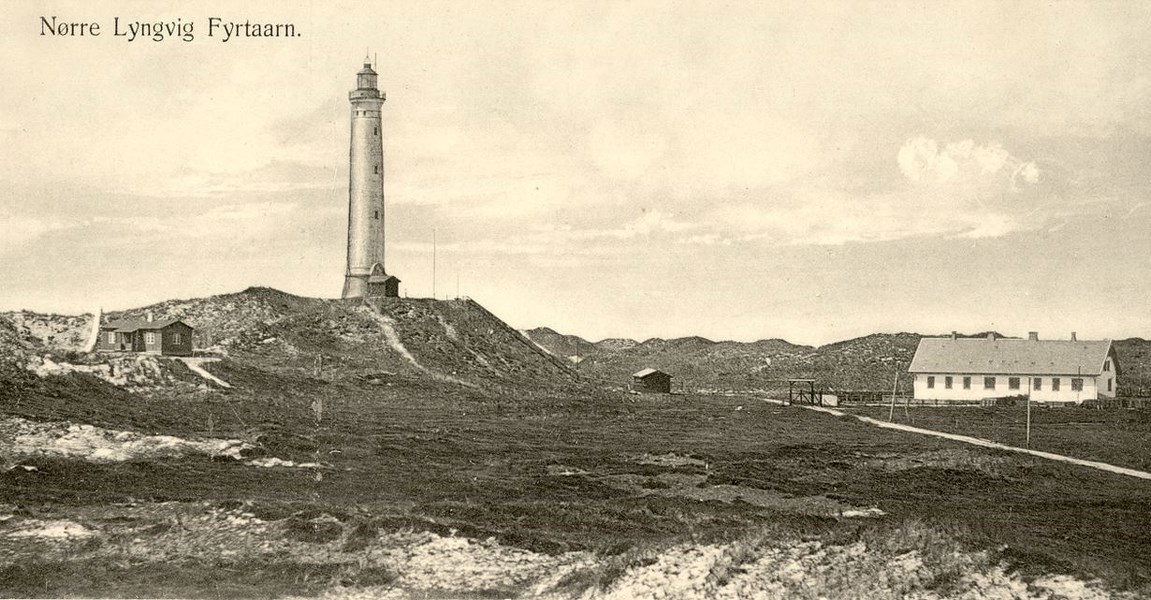 Lyngvig Lighthouse is the youngest of Denmark's major lighthouses. The lamp was lit for the first time on November 3, 1906. The tower stands on a 17 metre high sand dune, and at 38 metres (and 228 steps), it reaches a Danish record-breaking flame height of 55 metres. The light can be observed from a distance of approximately 40 kilometres.

In the beginning, the lighthouse shone with gas from a small gas plant in a shed next to the tower. In 1920, it was converted to petroleum, but in 1946, the lighthouse had a small DC power station added, and since then, the light has been electric. In 1955, Lyngvig Lighthouse was connected to the public grid and in 1965, it was automated, which allowed the permanent crew to be reduced from three to one.

Modern shipping does not require lighthouses, and Lyngvig Lighthouse is no longer manned. In 2011, the light from the beautiful old rotating lens was replaced with a fixed LED light. In 2013, however, local forces succeeded in bringing back the characteristic sweeping light.

Every year, Lyngvig Lighthouse is visited by more than 50,000 people, who get to experience a spectacular view of the sea, fjord and dunes. 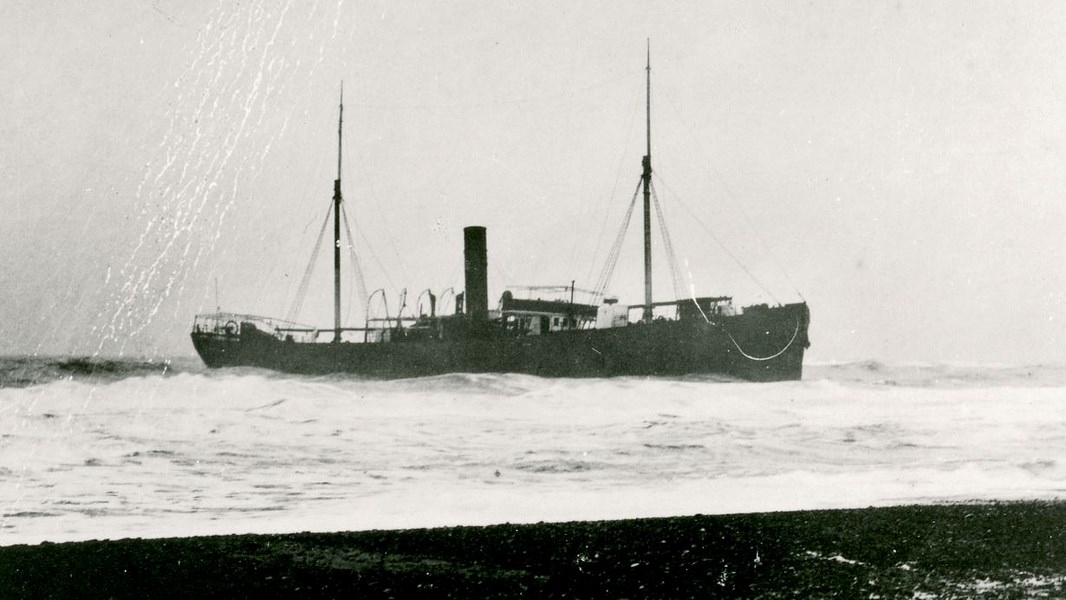 In the early 1900s, ships had to manage 125 kilometres of coastline between Bovbjerg and Blåvands Huk without help from the shore. There were numerous shipwrecks.

In 1903, the steamer S/S ‘Avona’ of Bergen was transporting a cargo of seed cakes from New Orleans to Aarhus. The captain had died on the journey across the Atlantic, and the ship was now the mate's responsibility. It was stranded near Bjerghuse, between Ringkøbing and Thorsminde on January 31, 1903. The 24 crewmen made the biggest mistake of all: They boarded the ship's lifeboats.

An eyewitness recounts:
"Everyone on the beach, spectators and rescuers, followed the lights along the shore, but then suddenly we heard a scream, and the lights disappeared, and everything was silent again, eerily silent. The boats had apparently capsized in the violent waves, and all those aboard were swept into the sea. We all stood there and it became so strangely quiet, because we felt, each and every one of us, that a struggle for life was taking place out there, only a few metres from us, and we were unable to bring them aid."

Later that night, the ship drifted further inwards, until it stood just 50 metres from the shore. If the crew had remained on board, they could now have been rescued without much drama, but they were washed ashore, all dead, in that same time.

After the tragic stranding, the Norwegian government and the Norwegian sailor's union contacted Denmark with a request to build another lighthouse on the treacherous west coast. The request was noted and addressed. Lyngvig Lighthouse was the result. 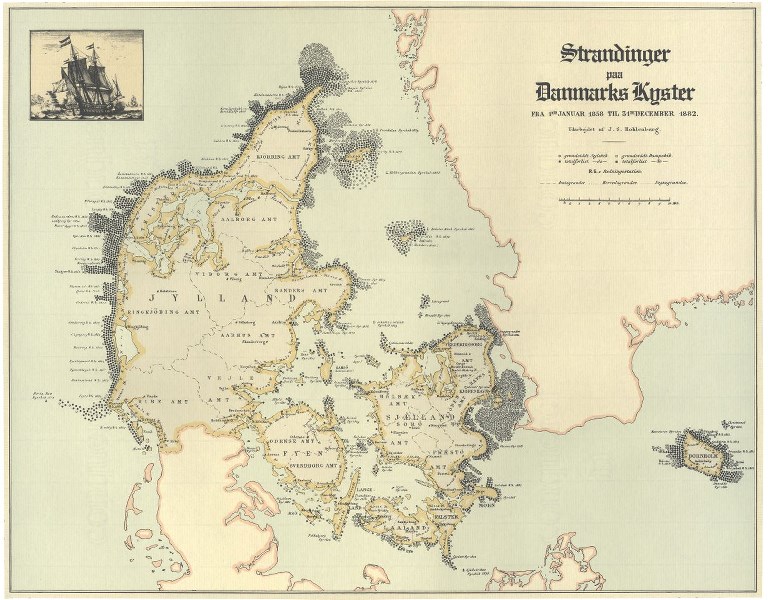 On December 30, 1906, the Family Journal's "news from all countries" section mentioned the new Lyngvig Lighthouse, written by "Sailor":

"Those days are long gone when the Germans, with good reason, were able to draw their "Caviar Map" of Northern Jutland as an argument for the new Kiel Canal. There will, of course, always be shipwrecks on such a long and dangerous coastline as the Danish one stretching from Blaavandshuk to Grenen, but even though a log was kept ever so carefully of every grounding, the dots would now be scattered, and quite different to the infamous Caviar Maps, where the entire coastline was shrouded in an eerily wide belt with black dots. [...] At the beginning of November, a new, proud lighthouse was lit on the western coast, the mighty blinker at Nørre Lyngvig on the Holmsland dunes, just a mile away from Ringkøbing. The lighthouse, which is designed in accordance with the newest and most modern principles, sends 4 powerful flashes out across the sea every 20 seconds. On clear nights, they can see the "Nørre Lyngvig" flash its rapid "Caution!" as far south as Esbjerg, and in the town of Ringkøbing, the flashes appear as powerful lightning."

The caviar maps to which Sailor refers are J.S. Hohlenberg’s maps of shipwrecks along the Danish coasts between January 1, 1858 and December 31, 1882, where a belt of black dots indicates the wrecks along the west coast. 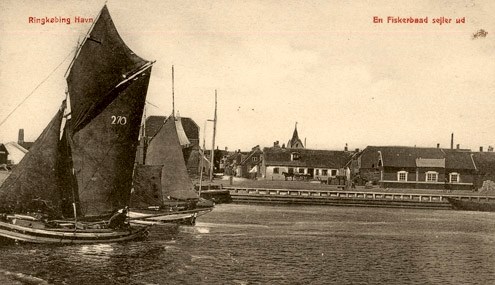 Before the modern engineering feats in Esbjerg, Hvide Sande, Thyborøn and Hanstholm, Ringkøbing was the only place on the entire west coast, where shipping was possible. But the conditions were difficult. The entrance through Nymindegab was narrow, the Ringkøbing fjord was shallow, and at Ringkøbing itself, ships had to lie in the roadstead and reload to smaller transfer boats, which then landed on the beach or at a modest wharf.

It was only when Lyngvig Lighthouse was on the drawing board that the construction of a real harbour in Ringkøbing could begin. Construction materials for the large tower arrived in Ringkøbing by rail. They were then shipped to Nørre Lyngvig, where a small harbour would have to be created.

The construction of Ringkøbing harbour was tendered in December 1904. The contract was won by S. Abrahamsen of Esbjerg. On November 17, 1905, the port was ready for use.

When Lyngvig Lighthouse was completed, the harbours were, of course, still there. A group of visionary men in Ringkøbing, spearheaded by watchmaker L.C. Andersen, saw the potential. In 1910, tourist steamer Prins Hamlet was put into service between Ringkøbing and Nørre Lyngvig. It was a great success. In 1911, 16,000 people took the tour. And that is how Lyngvig Lighthouse helped to initiate tourism on the Ringkøbing Fjord. 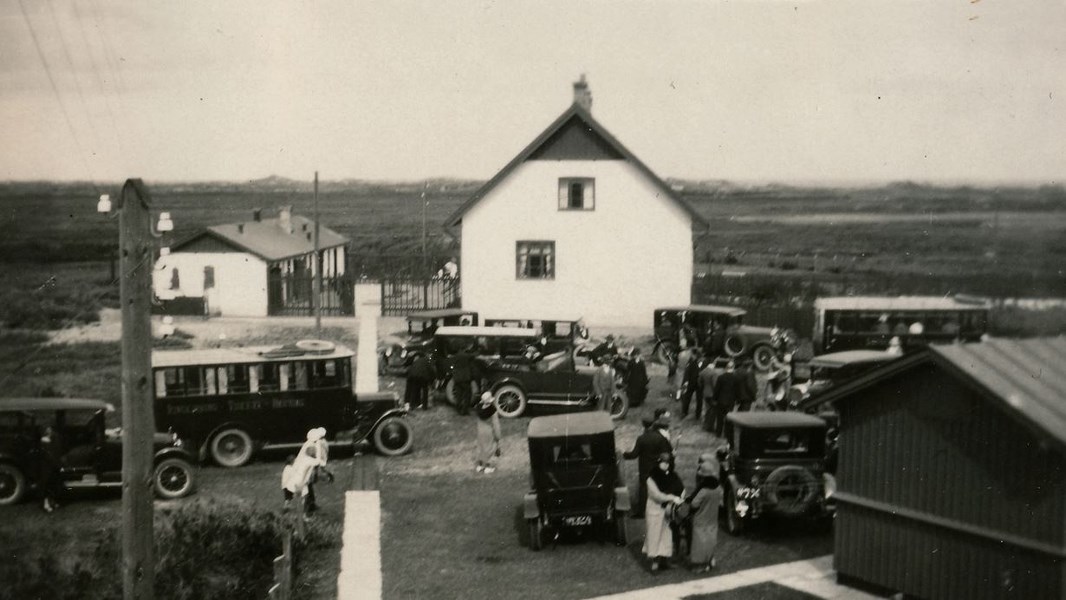 Tourists want a view. That is how it has always been.

From the very beginning, Lyngvig Lighthouse has always been open to visitors. For many years, it cost 25 Danish øre. That was a lot of money at the time, but it was a requirement that visitors could only enter when accompanied by a member of staff. The beam from the lighthouse was the difference between life and death, so unattended visitors near the tower's gas pipelines, weights and mechanics could not be risked.

The image is from the National Railways’ Holiday Trip to the North Sea in August 1928. Participants stayed at a seaside hotel in Søndervig, but one of the organised excursions was by car and bus to Lyngvig Lighthouse and Hvide Sande. The Rybak family from Slagelse came along. Their photo album is now in the Ringkøbing-Skjern Museum. This photo is taken from the stairs leading up towards the lighthouse, on the way down to the lighthouse keeper’s estate.

Until the automation of the lighthouse in 1965, Lighthouse Keeper E. Nedergaard’s place was in the small office at the top of the tower. He said that he liked the many tourists as much as a cat likes mustard, but he was still friendly and convivial. It was part of the job. To those who arrived short of breath, he said: "If you are short of breath, you must go out onto the balcony. There is plenty of it there." And to the bearded: "Take your hat off and stick it in your pocket before going out into the wind, but by all means keep the beard on. The wind is only seven today."

Today, it is possible to access the incredible view without any clever comments. Tickets can be purchased at the lighthouse keeper’s estate, where there are also exhibitions about the lighthouse, strandings and beach life. 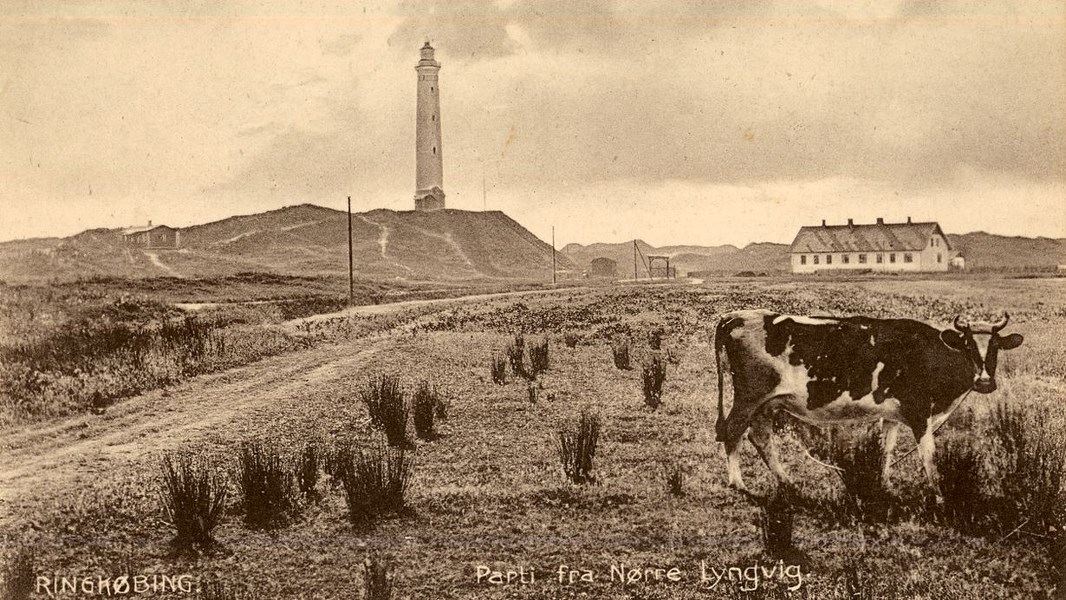 "Out here, it is just you, and you alone." That is what the last lighthouse keeper, Flemming Priis Jørgensen, said in 2004. Lyngvig Lighthouse has always been a bit of an island on the Holmsland dunes. In a world of sea and fjord, fishermen and farmers, the government officials with their gold-trimmed caps stood out.

But even though the cultural distance to Hvide Sande (only 5 kilometres away) might be great, the actual distance to other governmental institutions and infrastructure was further still. The people at the lighthouse had to do most things themselves, both in terms of daily necessities, as well as the operation and maintenance of the lighthouse. Employees at Lyngvig Lighthouse had to show diligence in wiping off the condensation and polishing the lens, but also had to have a good knowledge of mechanics. Ideally, problems in the lighthouse would be resolved before nightfall.

Poul Erik Jørgensen, who was employed at the lighthouse from 1957 to 1988 eventually got through to the locals. In Hvide Sande, it was believed that, "Those in the lighthouse are different. They were finer people. Not people who could blend in with the locals. But once I had been here for about two decades, they started to call me Poul. I took it as progress, before that I was always Jørgensen. Further down the road, I became Poul Lighthouse – and to some, ‘It's the Tower’ – but it did take a good few years." 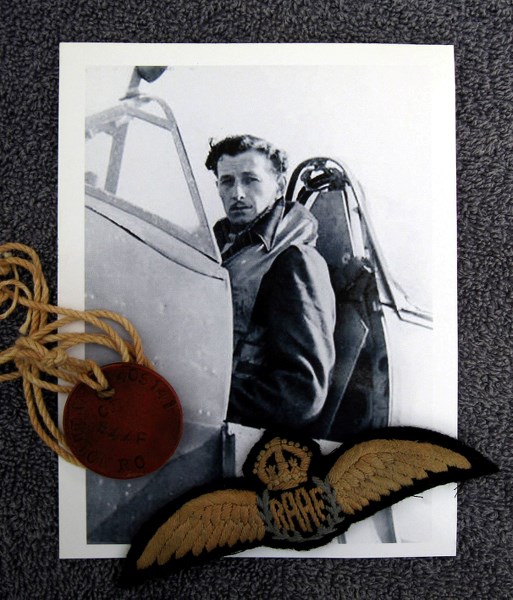 Lighthouses had a very special role to play during the last dramatic year of the occupation, when Allied aircraft flying missions over Denmark carrying bombs, sea mines or supplies for the resistance could use the lighthouses for landfall.

When, on March 21, 1945, the British bombed the Gestapo headquarters in Shell House in Copenhagen, the fast, low-flying Mosquito and Mustang planes made their approach past Lyngvig Lighthouse. In Copenhagen, they destroyed Shell House as planned, but accidentally hit the French School as well, killing 104 civilians.

Australian fighter pilot Robert C. Hamilton’s Mustang was hit on one wing by anti-aircraft fire. He was able to follow the formation back west, but he was losing oil and could not embark on the long trip across the still winter-cold North Sea. He made an emergency landing in the broad delta of the Skjern River at Lønborg, just 30 kilometres from Nørre Lyngvig, where he had flown into the country not long before.