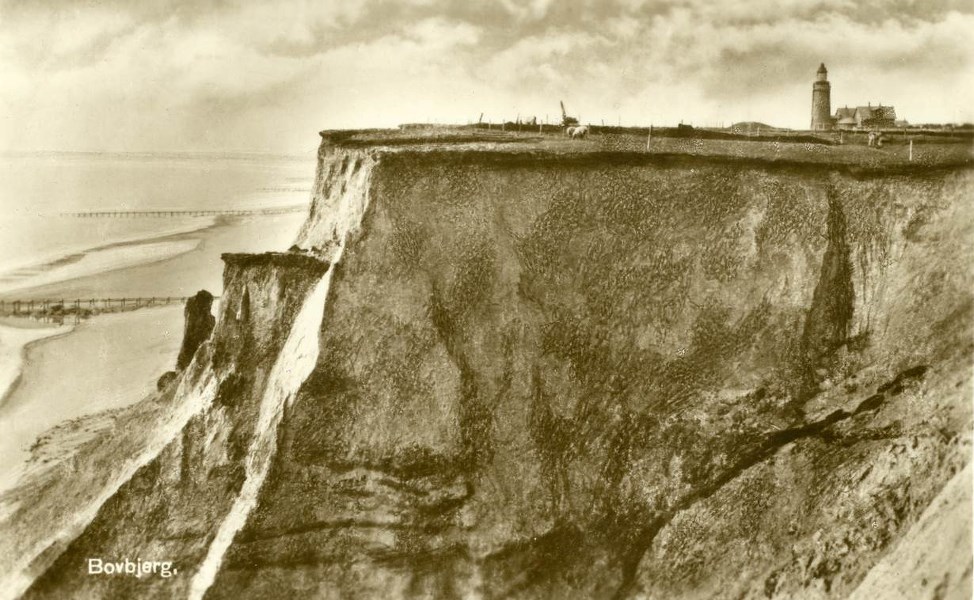 The lighthouse at Bovbjerg was erected in 1877. The tower is 26 metres tall and since it is located on Bovbjerg cliff, about 40 metres above sea level, it has a flame height of 62 metres. In good visibility, it can be seen almost 30 kilometres away. Bovbjerg Lighthouse was painted red, so that mariners would not confuse it with the white church towers in Ferring and Trans, which also served as beacons.

The lighthouse is still in operation and has a light frequency of 2 flashes every 15 seconds, but no lighthouse personnel are employed as it is controlled from Fornæs Lighthouse at Grenaa. Today, Bovbjerg Lighthouse is an arts centre, where volunteers invest their time. 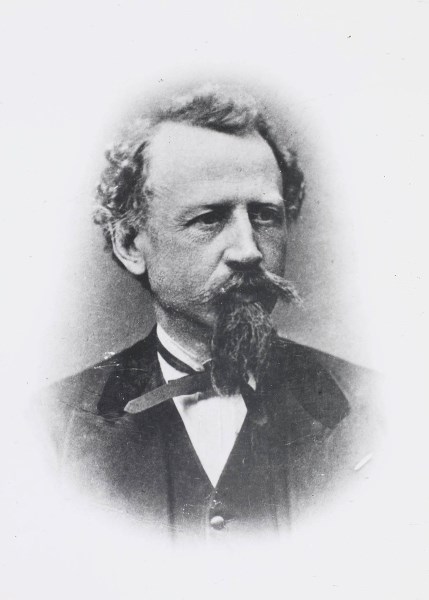 Bovbjerg Lighthouse was designed by C.F. Grove, who was a lighthouse engineer with the Danish Lighthouse Authorities. In fact, it was down to him that lighthouses were built on the west coast. In 1853, a state commission was appointed to draw up a report on improving the Lighthouse Service in Denmark. The Commission consisted of a vice admiral, two senior grade commanders and lighthouse engineer Grove. After a year's work, the Commission concluded that it was not necessary to build large lighthouses in many places in Denmark, but in inland waters, they should be so close together that ships always had at least one lighthouse in sight. As for the west coast, it would be better if it remained dark, prompting ships to steer well clear of this "Iron Coast". Grove, however, did not agree, and fortunately received backing from the Ministry of the Navy. When he became head of the Lighthouse Service, the construction of lighthouses on the west coast, including Bovbjerg Lighthouse, began in earnest. Under Grove’s management, 24 new lighthouses were erected and 8 new stations were created.

In addition, Grove was also the driving force of a commission tasked with finding out how to safeguard the west coast from degradation; he invented the special breakwaters that have been built on the west coast since 1875. 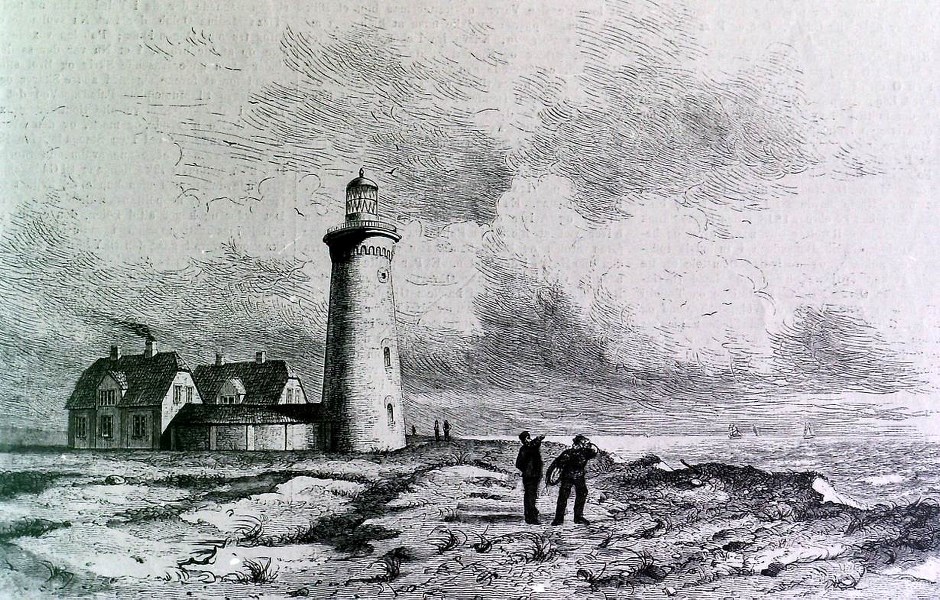 The lighthouse and shipwrecks

The picture is from the Illustrated Journal, 1878, with the description "The new lighthouse at Bovbjærg" 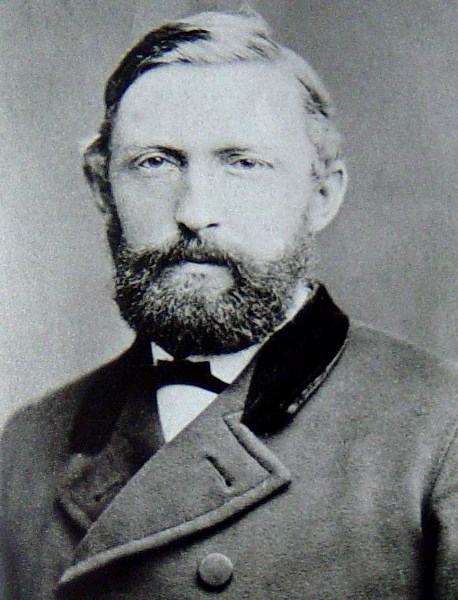 The lighthouse keeper as a rescuer

On Sunday October 16, 1881, the vessel "Mathilde" of Holbaek stranded at Ferring. The rocket apparatus from Ferring was on the scene and the crew shot out a line, but there were problems on board. In the end, the crew had to jump into the water and swim ashore. However, there were still two young boys on the ship. In his report to the lighthouse authorities, Heering wrote "We managed to get them ashore" – but he did not say how, or who had done it, even though it was actually him! "Mathilde’s" captain did, however. In his report, he reveals that the two boys would have perished, "...had Lighthouse Keeper Heering from Bovbjerg Lighthouse not thrown himself into the surf, where, by a retreating wave, he was pulled towards the wreck, managing to get hold of one of the boys and bring him ashore. Immediately thereafter, he did the same with the other, a French boy, and this double rescue was indeed at the last moment, as both boys were, when they came ashore, almost unconscious from exhaustion and would not have been able to stay by the ship any longer. It was a bold and courageous action [...] Herr Heering repeatedly put his own life in danger by, in the dark night and terrible surf, swimming out to the wreck to rescue two human lives that without him would likely have been lost."

For his deed, Heering received a medal for the Rescue of the Drowned. But he also fell out with rescue manager Anton Andersen, who believed that the responsibility came under the Rescue Brigade, and that Heering had therefore interfered in matters that did not concern him. 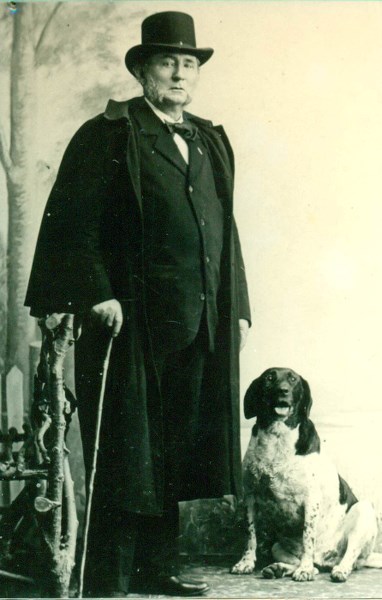 Three official residences were connected to Bovbjerg Lighthouse. There was the lighthouse keeper’s residence to the south, which was the finest. Above this was the first assistant's residence. The second assistant was housed in the north wing of the building complex, which also housed the stables.

The keeper ranked at the top of the lighthouse hierarchy. He reported to superiors in the Lighthouse Authorities, which belonged to the Ministry of the Navy, who kept a close eye on its employees; nothing could be done without written authorisation from the Ministry of the Navy. Working life as a lighthouse keeper was highly bureaucratic. Each time new supplies of oil, cleaning cloths etc. were to be purchased, it had to go through the Lighthouse Authorities and be ordered from the storehouse in Copenhagen. There were records and written reports on everything that occurred at the lighthouse – about who performed what work and what they used.

In addition, there was a watch duty, in which the lighthouse keeper also participated. The main task was to make sure that the fire in the lighthouse burned at night. The shifts were divided between staff, and night shifts were not allowed to exceed 6 continuous hours. They had to stay awake, keep the lens completely clean of soot and dust, and write the service report before they finished their shift. During the day, the lighthouse staff had to ensure that all equipment and apparatus were maintained, and that order and cleanliness ruled everywhere – everything cleaned and polished! The light in the lighthouse had to operate faultlessly, or there would be stern reprimands and threats from above.

The picture shows Lighthouse Keeper Rasmussen, who served in the role from 1883 to 1903.

In 1899, the farmland was sold off, which pleased the lighthouse staff. Most of them had been sailors since their youth, and they lacked the desire and understanding for agriculture. But they kept the gardens.

In the photo from 1955, the gardens are still visible, as is the veranda, which belonged to the lighthouse keeper. The daughter of a lighthouse keeper recounts how it was necessary to provide shelter: "In the garden, rows of fascines made from spruce branches and twigs were planted to divide the garden into squares. For example, when father planted the potatoes and they came up and stood there nicely, a westerly gale would come in and they turned black in one night." 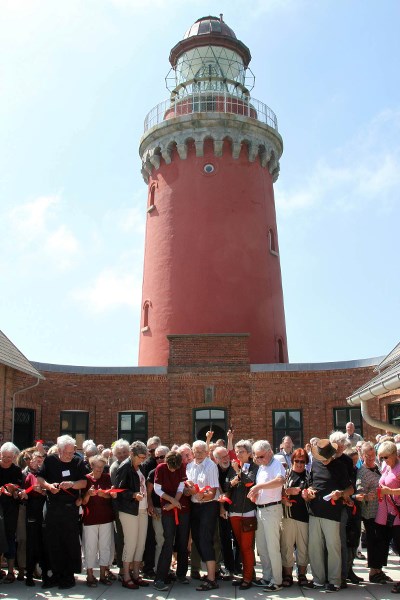 Bovbjerg Lighthouse is now an arts centre with about 50,000 visitors each year. There is a café, and various different events are hosted, such as communal meals, exhibitions, Constitution Day, autumn markets and tower abseiling! However, climbing the tower's 93 steps to enjoy the magnificent views of the sea and land is also still an attraction.

In 2003, local forces set out to ensure that the lighthouse remained publicly available after the Danish Maritime Safety Administration sold it. Eventually, Lemvig Municipality bought Bovbjerg Lighthouse for DKK 1 million and then “sold” it to the Bovbjerg Lighthouse Foundation for DKK 1.