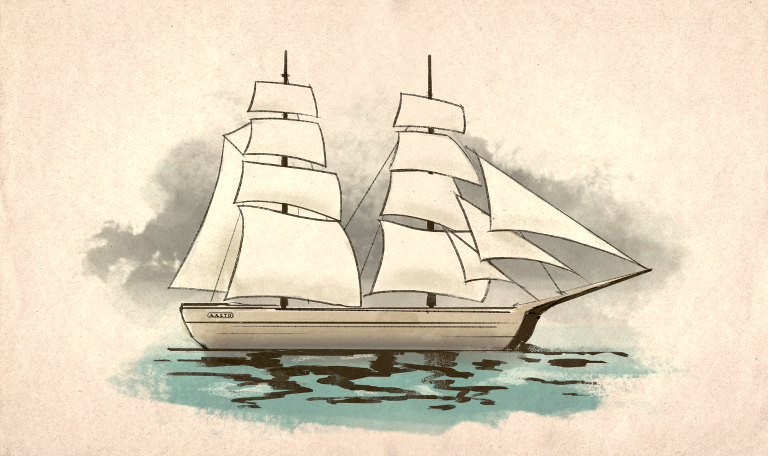 On 13 August 1852 at 11 p.m., Captain Bergstøm woke with a start. His Finnish brig, Aalto, had run aground on the way home from her maiden voyage to Odessa. The captain was quite astonished because he believed he was well away from the west coast of Jutland, but he was now stranded somewhere off Holmsland Klit. It got worse as a plank had come loose in the ship’s bottom! The captain rightfully feared for his and the crew’s lives. 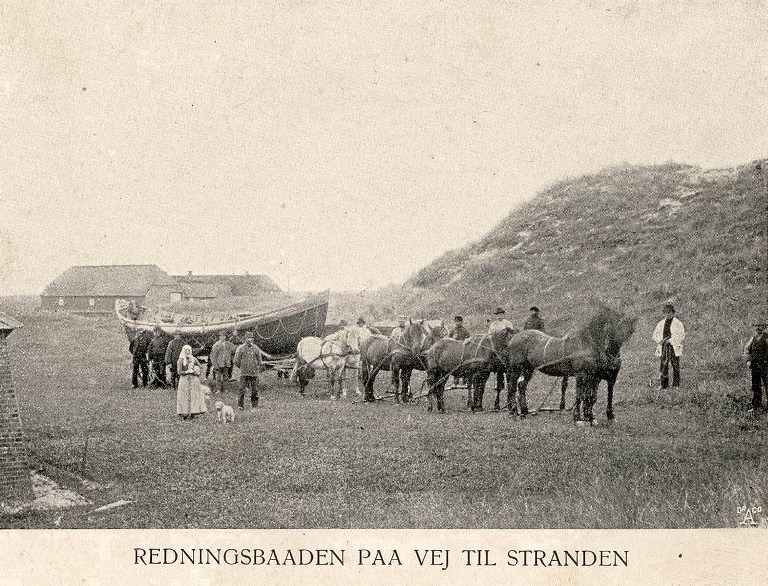 In the midst of the accident, there was a glimmer of hope. Aalto was stranded at Sdr. Lyngvig, where two years before in 1850, they got both a lifeboat and rocket apparatus. 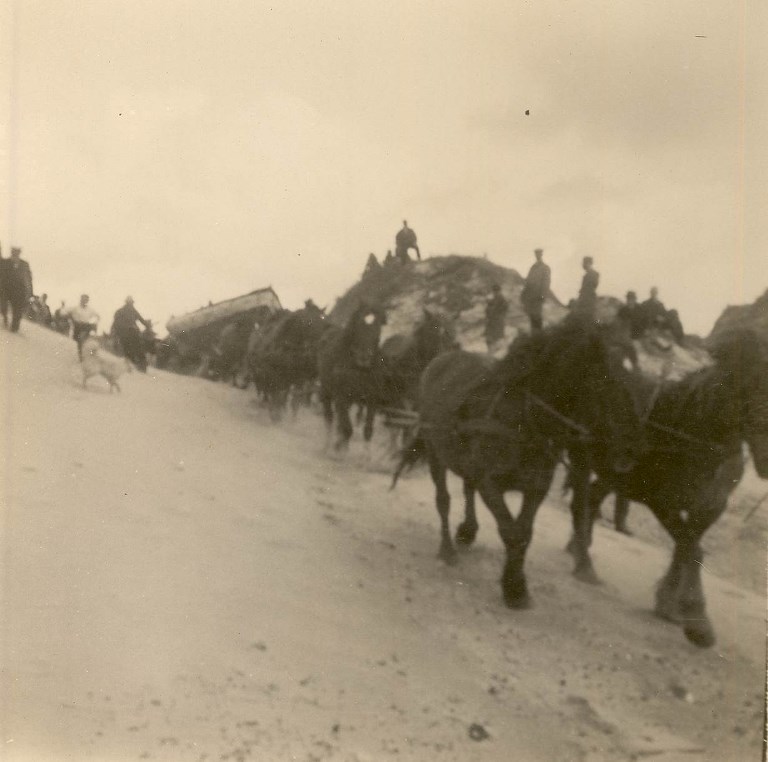 A report in the newspaper “Fædrelandet” read: “Yesterday morning (14 August 1852) at 5 a.m. Holmsland Klit resident Thyge Andersen went up on the high dunes [...] to see if his boat was safe and well after the rough weather that had raged during the night. He discovered a huge stranded ship with broken masts that, just a few fathoms distance from the coast, were still stuck in the sand. Some of the sailors worked at the pumps, while others signalled to him that he should get his boat and come and rescue them. Thyge reported this immediately to wreck master Jens Pedersen with whom fortunately was a Copenhagen lifeboat”. 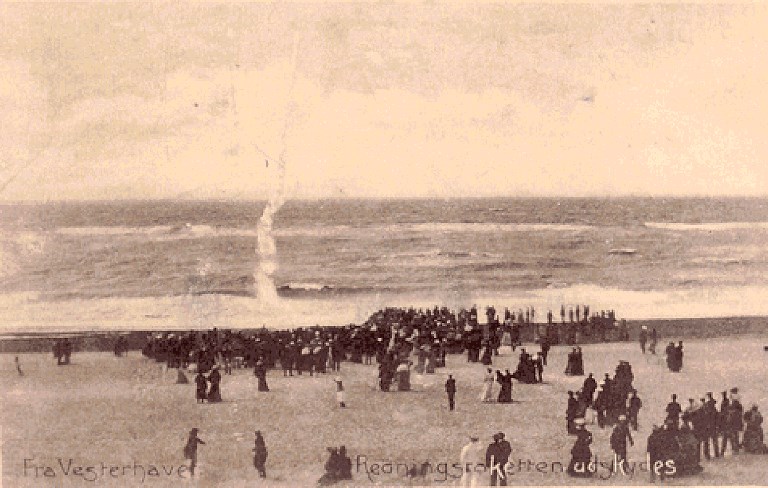 Fædrelandet continued to write: “After an hour the boat arrived pulled by six horses, with the necessary crew. The wreck master fired the rocket himself. The first time he failed, but the second time the rope fell on the shoulder of one of the ship’s sailors. After the lifeboat’s large rope was sent over to the ship, eight Holmsland Klit residents climbed into the boat." 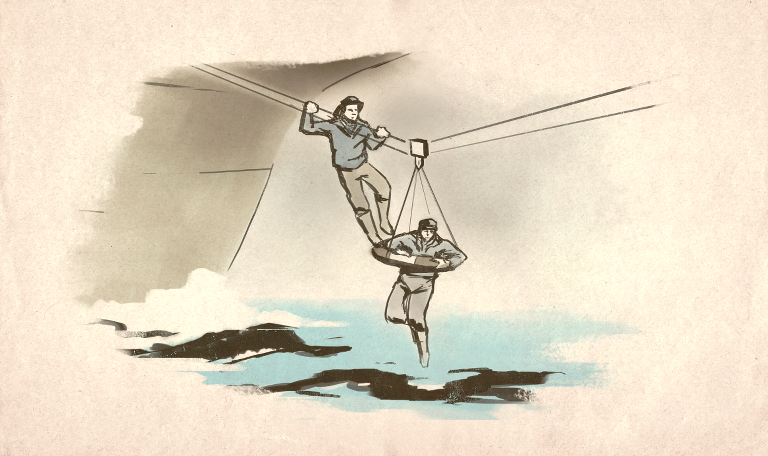 "When they came out through the surf, first the captain, Bergstrøm, was rescued, but then when two men had to be rescued at once, the chair broke as it couldn’t carry them both. They fell out, but clung to the rope and remained there until they were picked up by the boat. The other ten men were now rescued by each man tying a rope around his waist and being pulled ashore, without the lifeboat being used”.
The last sailor had just been rescued and brought ashore when the ship broke up in the waves. The beach was littered with pieces of the shattered ship, but everybody was alive.

Aalto’s rescue was a combination of a rescue with a boat and rocket line.

The line rescue was the preferred method of rescue, even before the rocket apparatus became widespread. If the ship was stranded near the shore, Holmsland Klit residents could throw a rope to the ship, or the crew could send a buoy with a rope attached to the shore. The method of rescue meant that Holmsland Klit residents did not have to venture out into the dangerous waves. As the rocket apparatus became widespread, a connection could be made to ships that were stranded up to 400 metres from shore. If the ship was stranded farther out, a boat was the only hope, and local men had to risk their lives.

When speaking of a “Copenhagen lifeboat”, it refers to the fact that State stationed lifeboats were all built at the Naval Dockyard in Copenhagen. The boats were built with air pockets in the construction and valves in the bottom so that they could remain afloat even in heavy seas.The lifeboats were high-tech in their time, but Holmsland Klit residents were still not impressed with the new boat they had been given.“Regarding the boat, Holmsland Klit residents felt that it was excellent in that it could not sink, but by the way it “rolled” and was not as sturdy as their own boats, which they would much rather use when they were fitted with the same equipment as the lifeboats, so that they were certain not to sink”.

However, the boat turned out to be not so bad after all, as it was in use for many rescues in the following years.