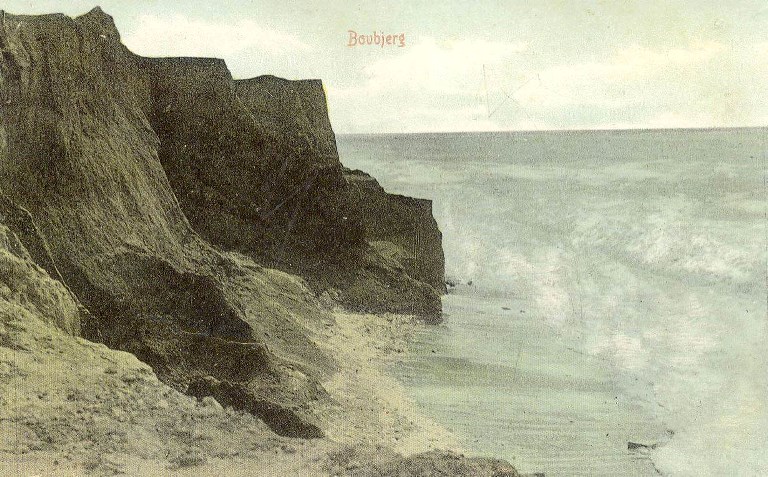 On November 27, 1908, the barque Noah was stranded at Bovbjerg with eight sailors aboard. The Swedish vessel was on its way from England to Aahus in Scania with a cargo of coal. In the English Channel, the 40-year-old ship sprang a leak and the crew had to work hard at the pumps to keep it clear of water. 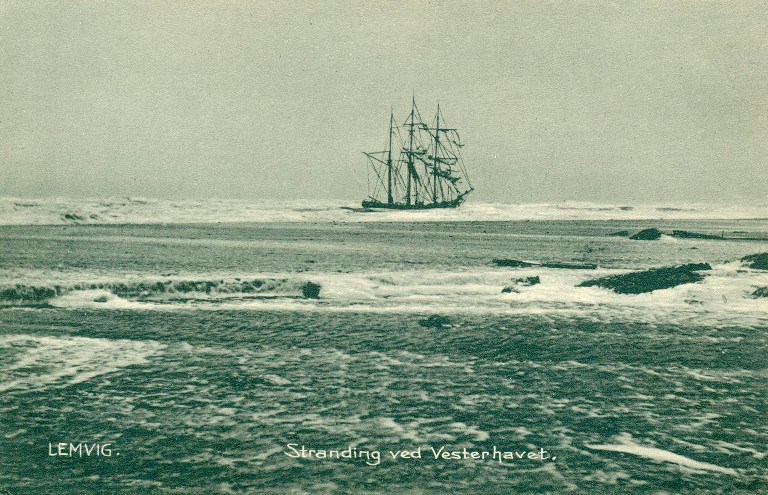 In the North Sea, Noah hit a storm and it became increasingly difficult for the sailors to keep the water out. At the same time, they had to contend with hunger and thirst, as the penetrating sea water had destroyed their supplies. In the end, the crew had no alternative but to let the ship drift towards the west coast of Jutland.
The photo depicts a stranded ship. 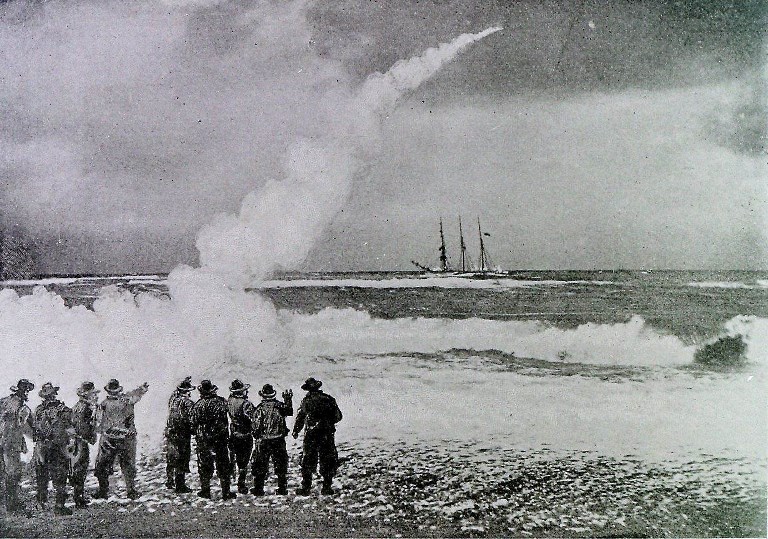 The Noah passed close by the first breakwater and got stuck on the sandbank just out from the seaside hotel in Bovbjerg. Shore Officer Christian Larsen was ready with the rocket apparatus and fired a rescue rocket to the ship, but the crew was so exhausted that they did not have the strength to pull the hawser aboard. 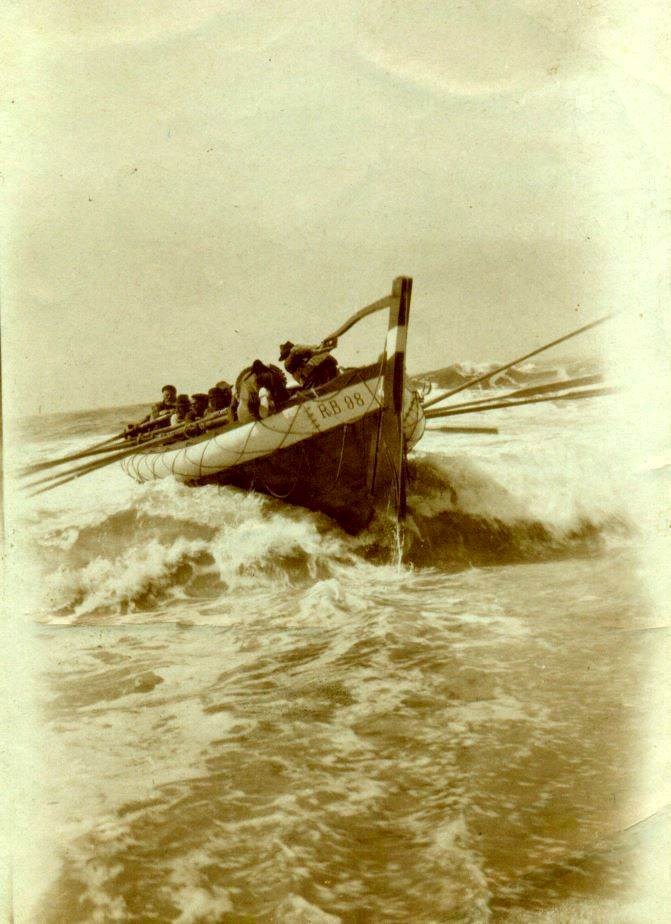 Instead, the Lilleøre lifeboat was launched. The sea was littered with debris, so the lifeboat had difficulty getting close to the ship. Eventually, they managed to reach the ship using a heaving line. One by one, the crew tied the rope around their waists and jumped into the icy waters, after which, rescuers pulled them aboard the lifeboat. The crew was saved at the very last minute. Shortly after, Noah's mainmast fell, and the ship sank into the depths. 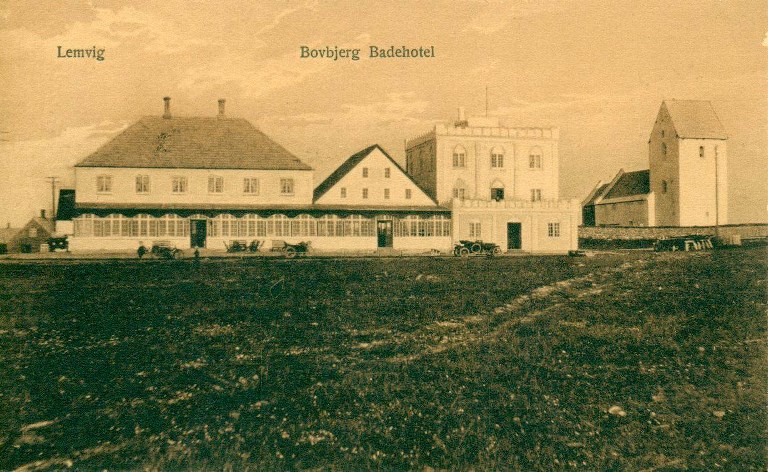 The exhausted sailors were housed by the shore officer in Ferring, and in the Bovbjerg seaside hotel, where they were given dry clothes, food and drink, as well as a warm bed to sleep in. After a few days, they were all fresh and healthy again and happy to have made it through the incident alive. 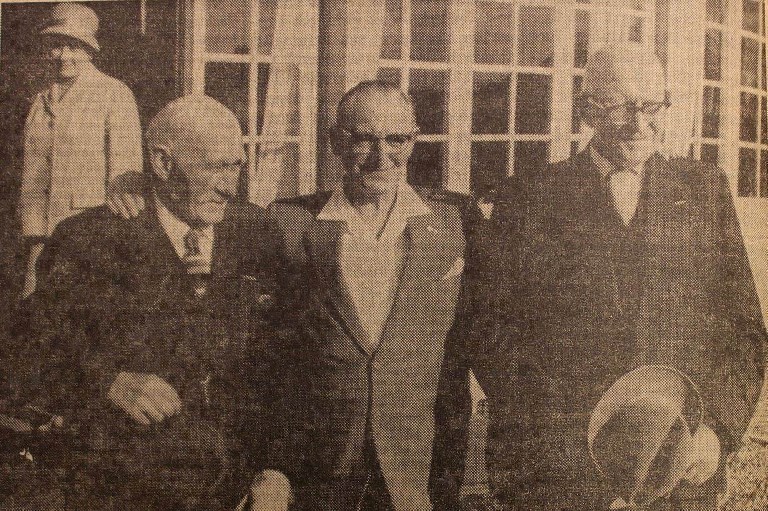 In 1961, Ship Deckhand Albert Krabel from Berlin returned to Bovbjerg to revisit the place where the Noah was lost 53 years earlier and where he had almost lost his life at only 15 years of age. Once again, he stayed at the seaside hotel in Bovbjerg, and met the brothers Hans and Niels Christian Lilleøre, who participated in the 1908 rescue operation. It was a heartfelt reunion between the former shipwrecked sailor and his two rescuers, and they shared and refreshed their memories of the wreck all those years earlier.


Many people were present to watch the Noah's stranding. To see the eight sailors rescued at the last minute was a powerful experience. Ole Olsen seems to have been amongst those on the beach, and he turned his experience into a poem that was published in the Lemvig Folkeblad on 15/12/1908. Here is an excerpt:

An old sailor did here come out
to sail the North Sea waters,
for two days every cloth was torn
the third was for the stranding.
It beached at Ferring and it was clear
if help was not swift,
the waves would take them
the ship, it creaked.

On the hull, the crew stood
fearfully, they watched the boat,
as the seas broke above them
with thunder and roaring and froth.
A mast falls and one cannot conceal,
the other will promptly follow.
Yes, death for those our sailors looms,
on land, the crowd grows anxious.

But the lifeboat is near the wreck
- today, it answers its name -
yet wreckage makes its journey hard,
it would have liked to do without it.
Yet, it came so far, a line could reach,
it is cast and we see where the crewmen stand,
their icy limbs are set in motion,
the stranding they will never forget.

They now take the line and bind it tight
around the waist of the weakest
He leaps in the water and is hauled in haste
into the boat and back again
Now the line is thrown, a new man appears,
he jumps and is hauled into the boat with strength,
and so it goes until the last,
we see them snatched from the jaws of death.