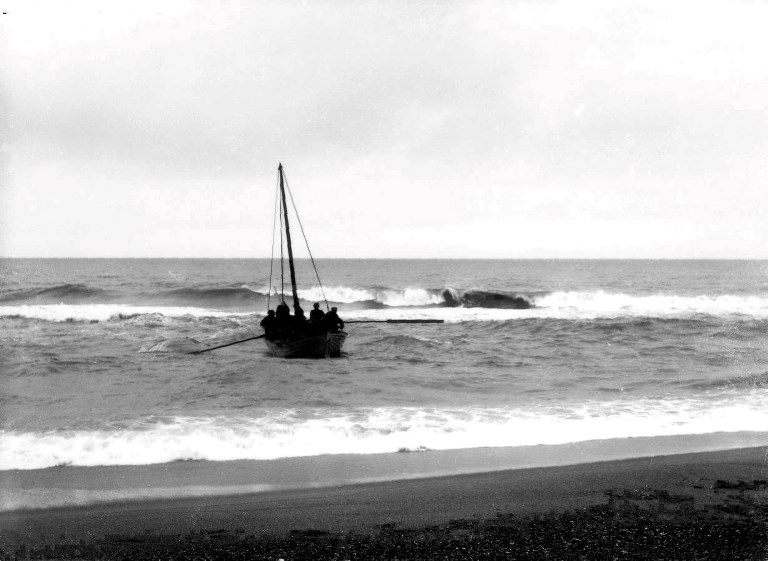 On the evening of November 20, 1893, the weather was fine and the sea unusually quiet. The fishermen of Harboøre were preparing to board their boats. It was important to arrive first at the best fishing spots. Each man on board had a set of 2,000 baited hooks, as well as provisions for the night. They were dressed in woollen sweaters, oilskin clothes and heavy sea-boots to cope with the cold. Some, but far from all, brought lifebelts. 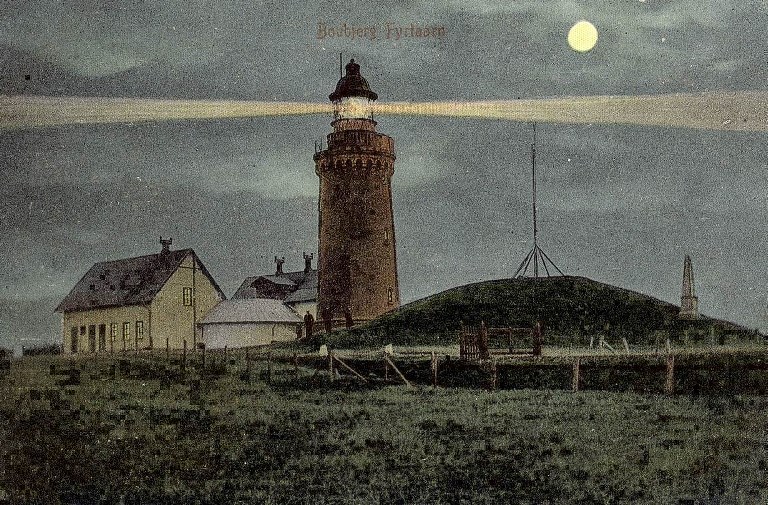 In the middle of the night, the sea began to rise and the fishermen sensed a violent storm approaching from the northwest. The waves were so high they sometimes blocked the light from Bovbjerg lighthouse. In their small open boats, the fishermen suddenly found themselves in grave danger. Should they remain at sea until the morning light, or should they abandon their fishing gear and risk the trip to the shore, crossing the dangerous surf in the dark? 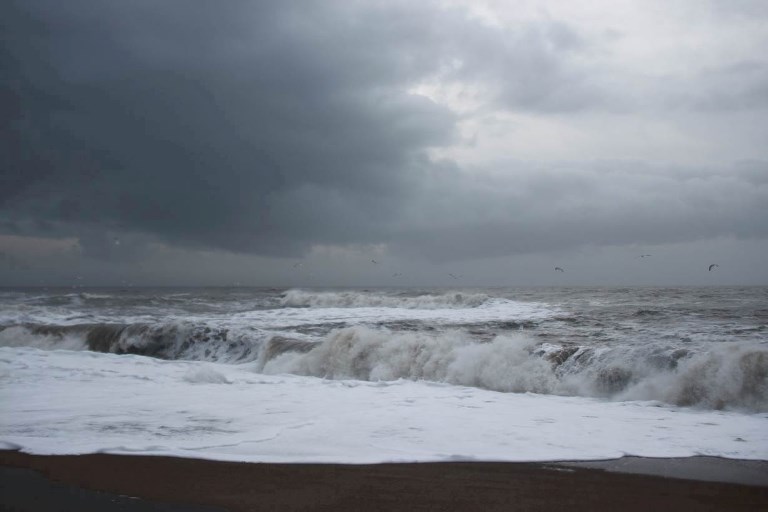 Fisherman Christian Madsen spoke to the Lemvig Daily two days after the disaster:

At 3 o'clock, we became afraid of the weather, left our hooks as prey for the waves, and turned inshore. On the inner bank, the waves broke above the boat, filling it with water. I managed to remove my boots and put on my lifebelt, then leaped out of the boat. When I reached the water, I hesitated and wanted to return to the boat, but that very moment I saw it capsize. I could hear that some of my companions had climbed onto the boat and they cried for help, but I could not see them in the dense darkness. I drifted around 1,000 alen (about 500 metres) south, and here I was cast ashore, after fighting the waves for 2 hours. I inhaled water 4 times and was unconscious when I was thrown ashore. I only came to when I heard a fellow say: Who lies here? My companions in the boat all drowned, except for boatman Jens Maae. 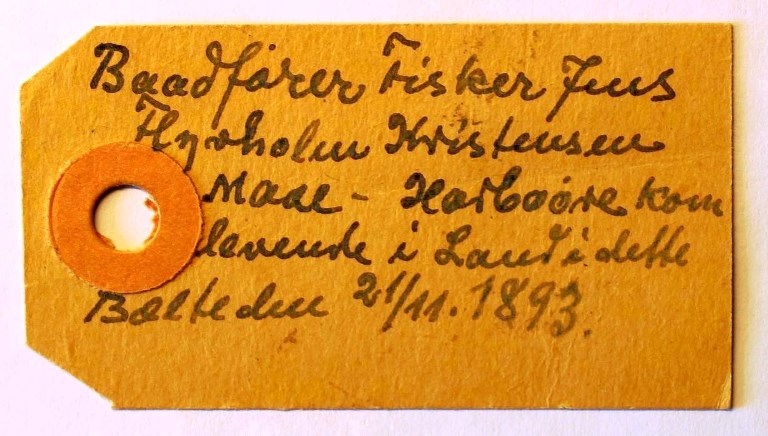 Jens Maae led the boat Lykkens Prøve (Fortune’s Trial), which capsized in the surf on the way inshore, and only he and Christian Madsen survived. Allegedly, Jens Maae’s hair turned grey on the night of the accident, when he saw his four companions drowning.

The cork belt that saved Jens Maae’s life was donated to the Lemvig Museum many years after the accident. 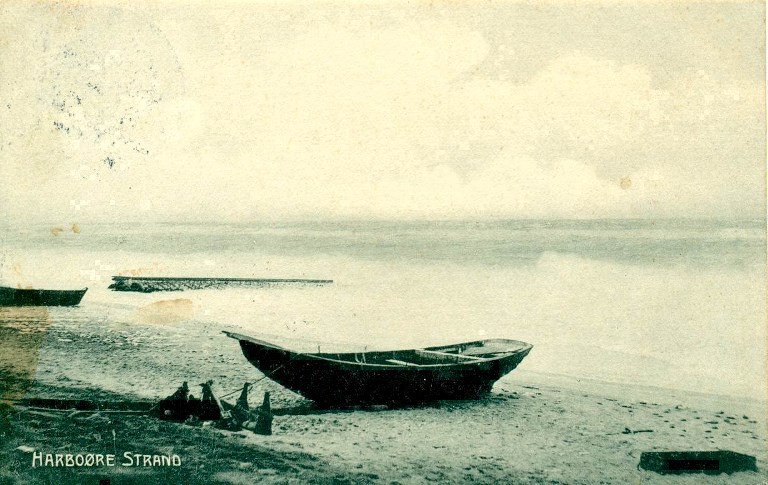 Anders Røn’s boat guild was out on the sea, waiting for morning to come. After hauling their catch aboard, they decided to head for shore. Jens Peter Jensen, who was in the boat, said of the landing:

We put on lifebelts and removed our wooden boots and some of our clothes. There was probably not much hope. Each of us probably had the same thought: "Today, we are not going to make it". The boatman knelt in prayer for a moment, took the helm again and said: "So, in the name of God, we continue.” It went well until we got close to the shore. Then the boat ran into a breaker, sending the stern completely under water, and the boatman was in water up to his armpits. But the sail pulled the boat to shore, and those from the other boat took us in. When we looked over the sandbank, we could see it was a divine miracle that a small open boat had made it through the surf. 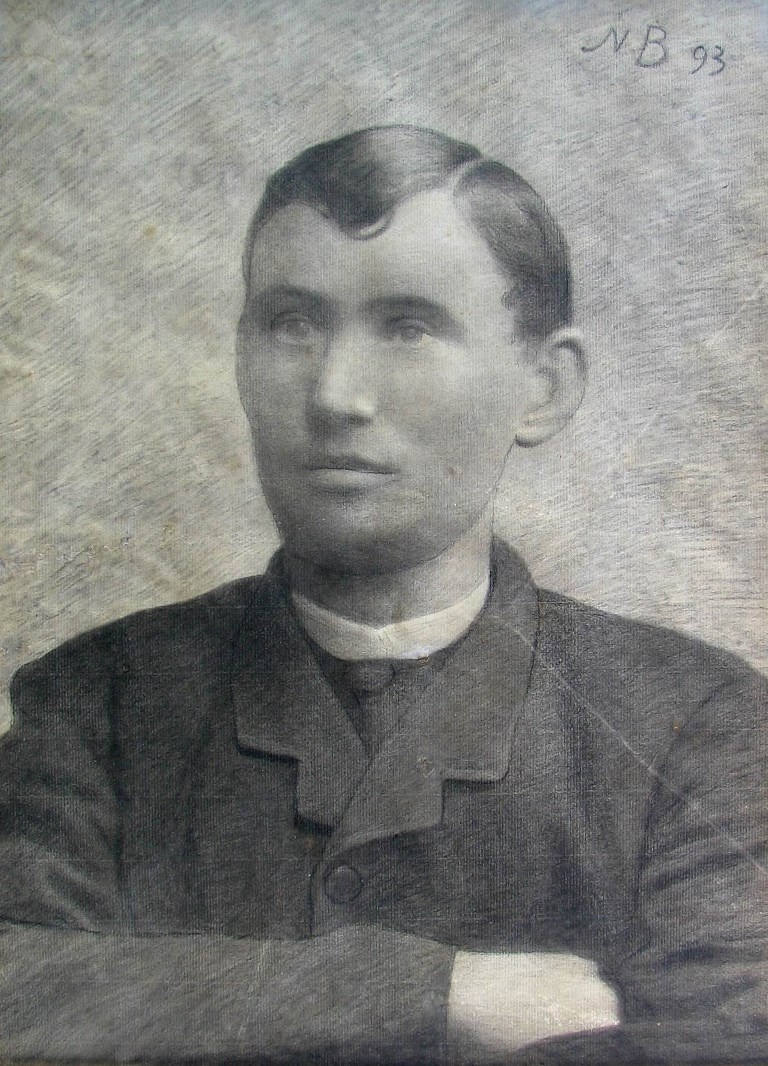 The boat Ricoboth from Langerhuse capsized on the outer bank on its way to shore. One of the crew members made it ashore on the keel of the boat. Boatman Poul Hav and fisherman Peder Larsen tried to save themselves by floating on two of the boat’s oars. After half an hour of battling the waves, they finally felt solid ground under their feet. But Poul Hav had no more strength left and said to his friend P. Larsen: "I can’t go on, but if you make it ashore, greet my wife and my old mother, and tell them that I probably went home to Jesus." Peder Larsen made it ashore, but Poul Hav drowned. 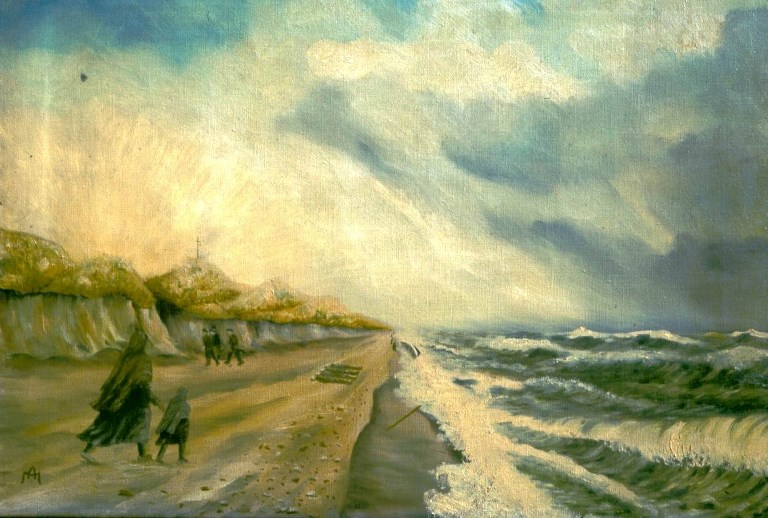 The residents of Harboøre rushed to the sea when they discovered that danger loomed. It soon became clear to them that many fishermen had drowned and many more were still in danger. In the picture, a local painter tried to reproduce the impression from that terrible morning: On the beach, bodies lie side by side. Three men carry a drowned man away, while a woman and child go to see if their husband and father is among the casualties. 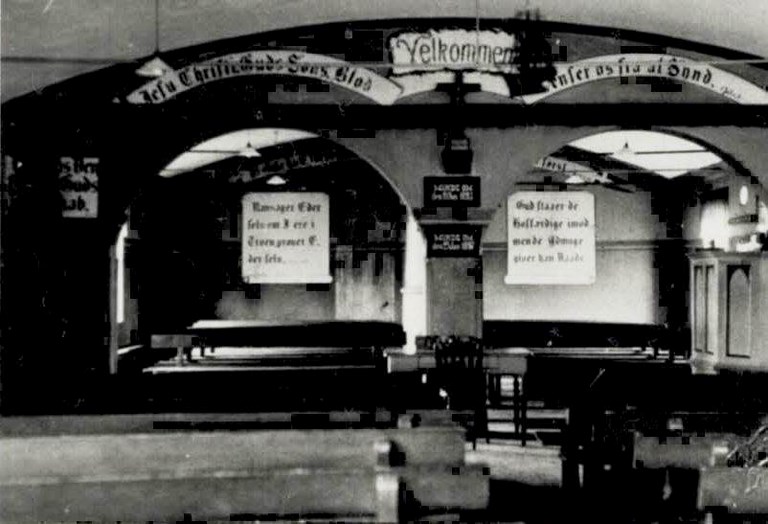 Some of the women went up the dunes to pray for the fishermen who were still at sea. Many thought about the meeting at the mission house the night before, where they prayed that God would "shake the tree a second time" to convert more non-believers to salvation. Was that what had happened now?  From dawn, there were no more drowned fishermen, and many interpreted it as if God had heard the women's prayers, just as he heard the prayer for revival in the mission house. 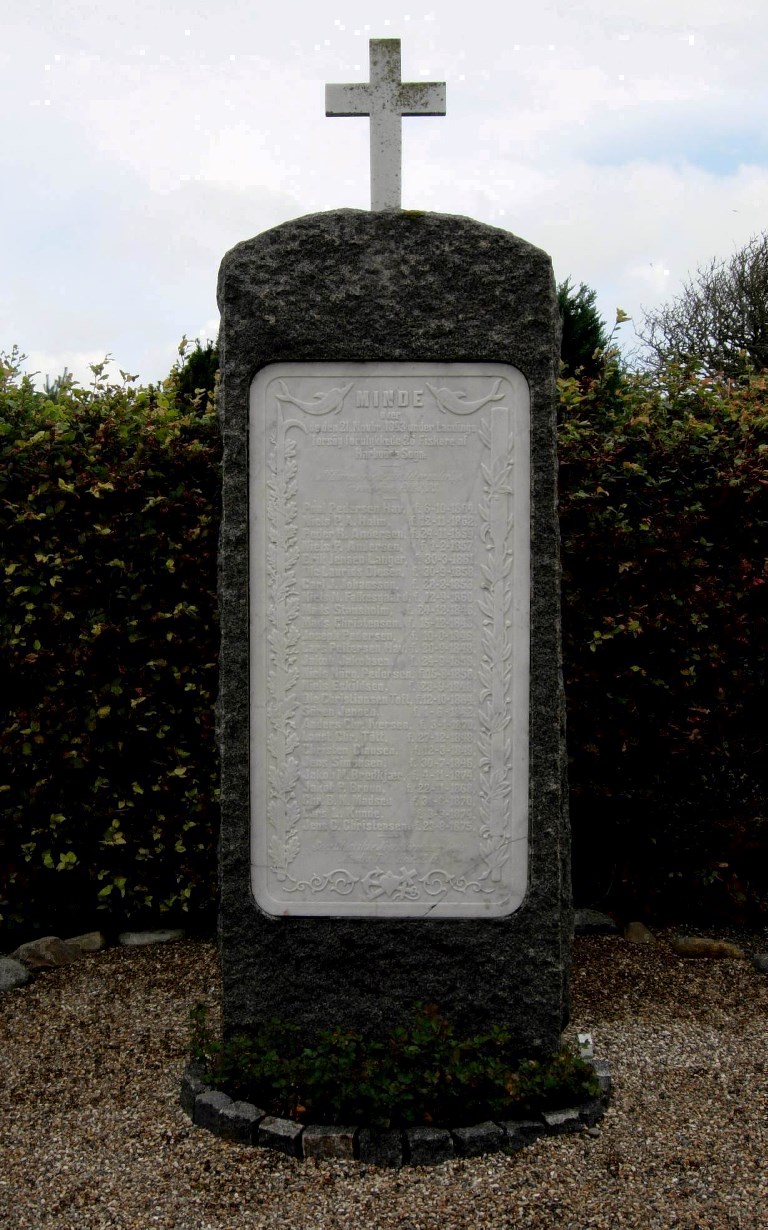 Several thousand people came for the funeral on November 27. The story of the accident had spread across the whole country, and official envoys from parliament and state institutions were present, along with a number of journalists from the capital’s newspapers. In Harboøre cemetery, a large common grave was dug for the drowned, and a podium erected beside it, on which speakers and dignitaries would stand. Some of the bodies of the 26 perished fishermen had not drifted ashore yet, and they had to be buried at a later date. The picture shows the inscription on the large memorial stone erected on the grave. 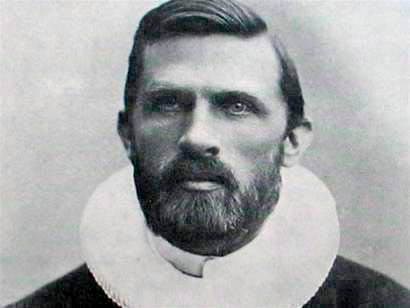 The parish’s former clergyman, the popular Reverend Moe, was invited to attend the funeral. Moe was one of the driving forces behind the evangelical revival at Harboøre. Reverend Moe's funeral speech did not contain so much comfort for the bereaved as it did condemnation of the drowned: Moe saw the accident as a sign that the survivors should convert to a holy life. The locals were used to Moe’s speeches, but visitors from outside were appalled. Over the following days, the press wrote about the funeral at Harboøre and the dark mission prevailing there. 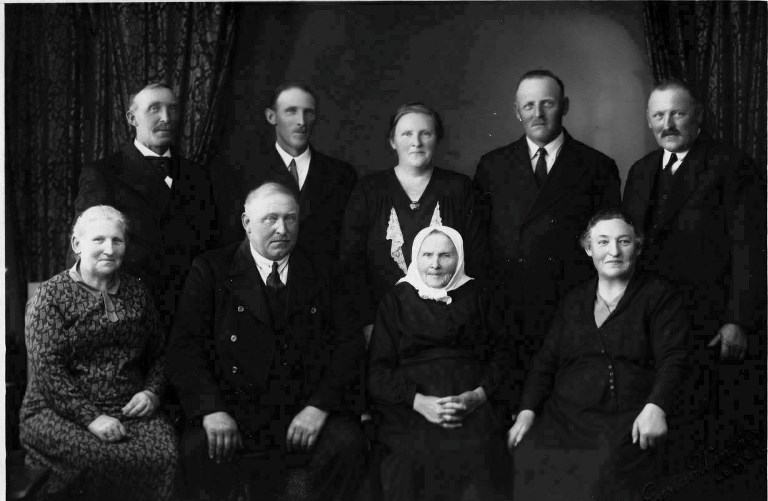 That night, 48 men drowned on the west coast, including 26 from Harboøre parish, who left behind 20 widows and 74 fatherless children. Harboøre was subsequently called the "Land of Widows". After the accident, money was collected from all over for the bereaved. This helped the widows to pay for the funeral, and they also received a lifelong annuity, allowing them to provide for themselves and their children. The photo shows Birthe Kirstine Tøt, who was the widow of Laust Tøt following the accident in 1893. The couple had 10 children, 8 of which are in the photo taken in 1930. 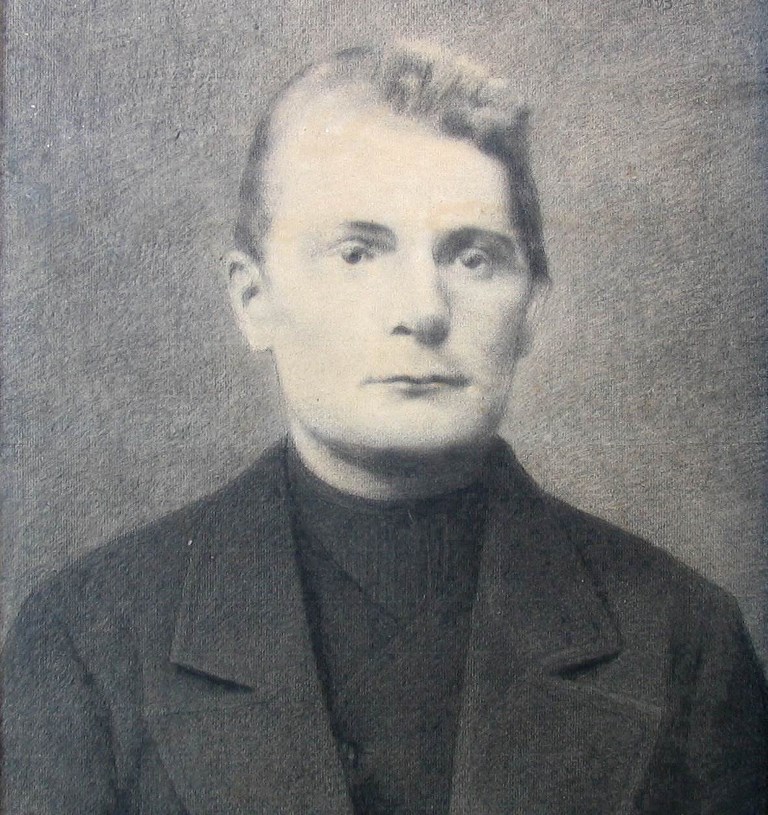 Like everyone else, painter Niels Bjerre was affected by the accident. He borrowed photographs from the bereaved and in return delivered a large charcoal portrait of the deceased in a glass frame. The families often only had old photos of the deceased, and many of the fishermen therefore look somewhat younger than they were at the time of the accident. In some cases, Niels Bjerre compensated for this by adding a beard to the person portrayed. The drawing shows Niels Nielsen Falkesgaard, who was 33 years old when he drowned in 1893.