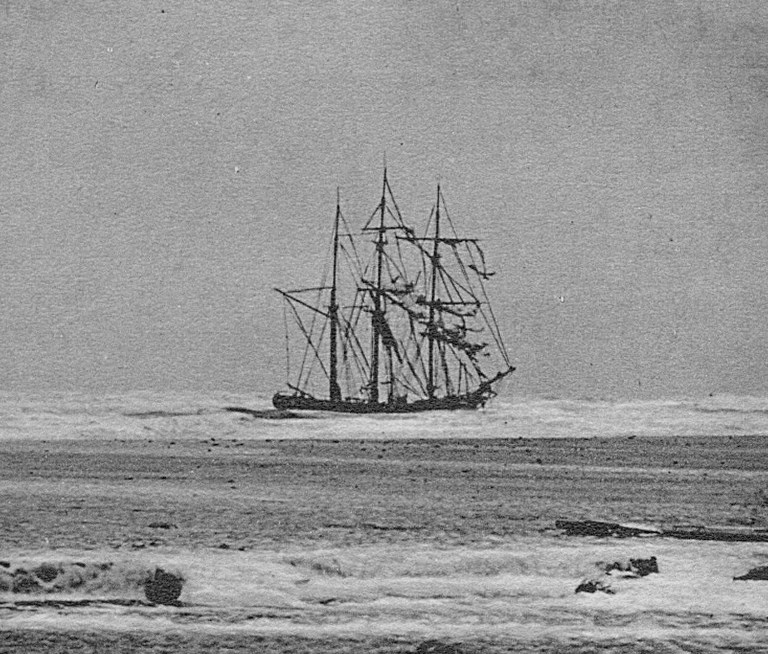 In October 1860, during one of the worst storms ever recorded, 15 ships were stranded on Harboøre. One of these was the SS Arctic of Hull, en route to St. Petersburg. 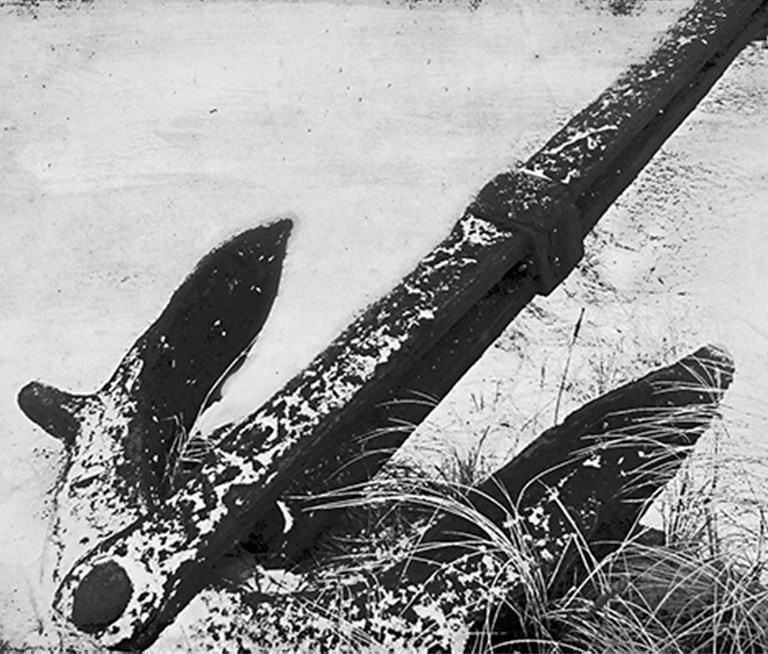 In an attempt to save the ship, the captain had anchored off the outermost sandbank, but waves constantly washed over the sides and eventually the ship was torn free of its anchor. 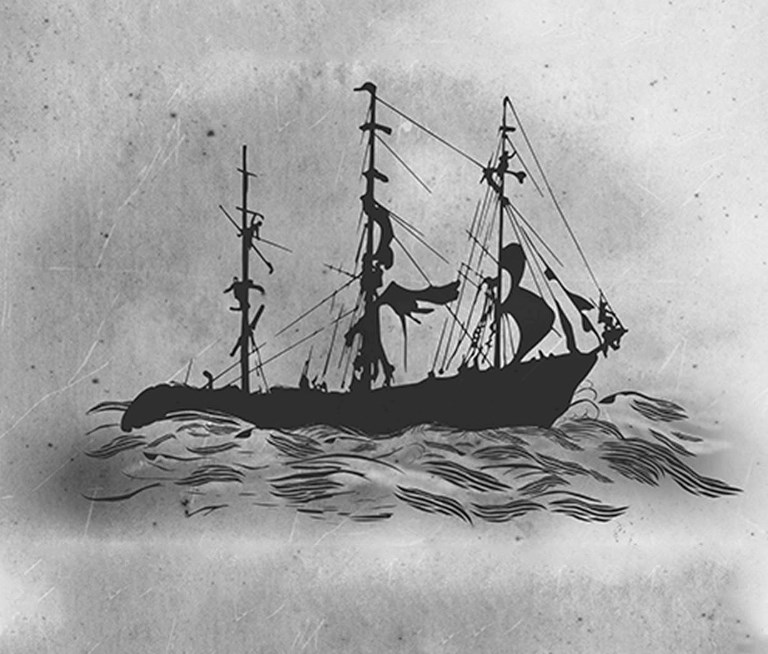 Within a short time the ship's hull was breached. Crew and passengers clung to the masts. Their screams could be heard from the shoreline. 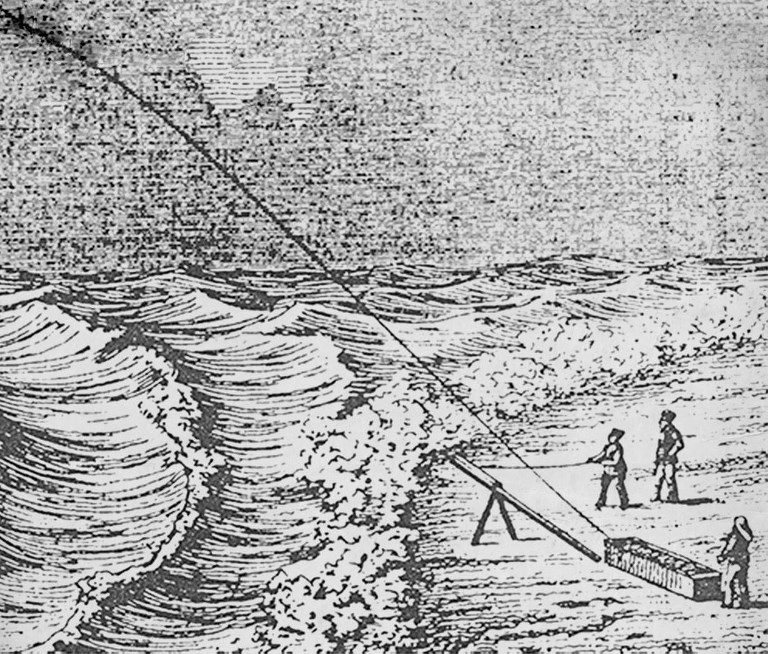 On the beach the rescue team was standing by with the rocket launchers, but the ship was lying beyond the range of the rockets, so they could not send a rescue line out. 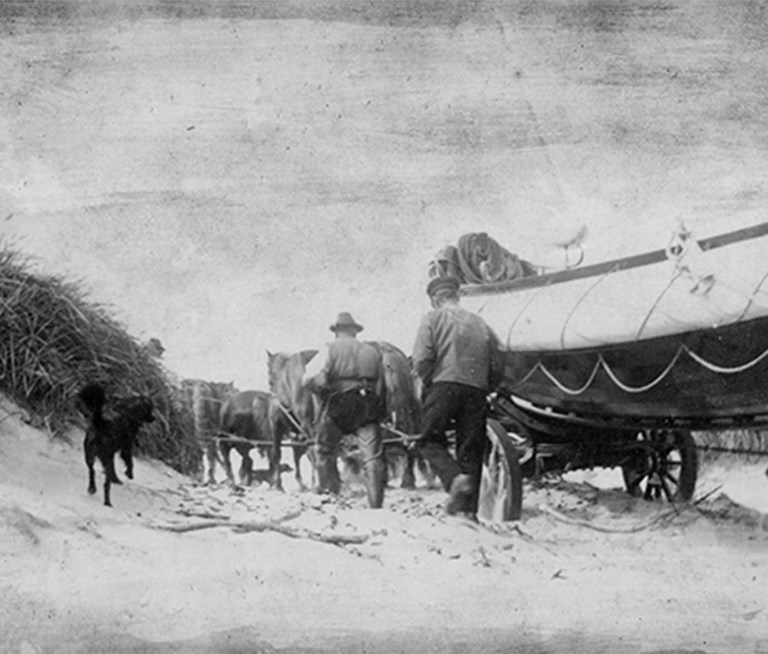 Night fell and the winds dropped and the following morning the rescue boat from Flyvholm Rescue Station arrived. But the exhausted crew felt it was impossible to stage a rescue attempt. 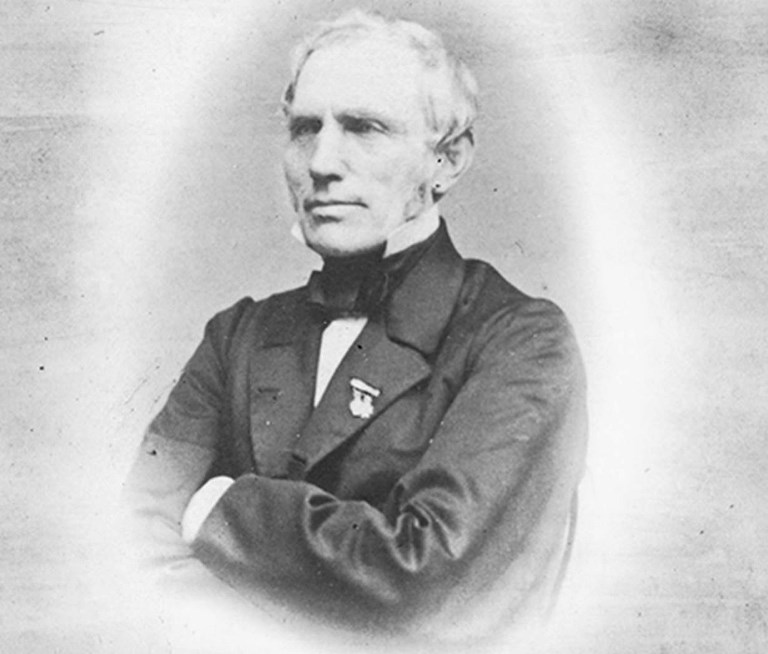 The Manager of North Jutland Rescue Service, C.B. Claudi, tried to persuade them. If they attempted a rescue, he would give them 100 rix-dollar, and if they perished in the attempt, he promised to look after their families. 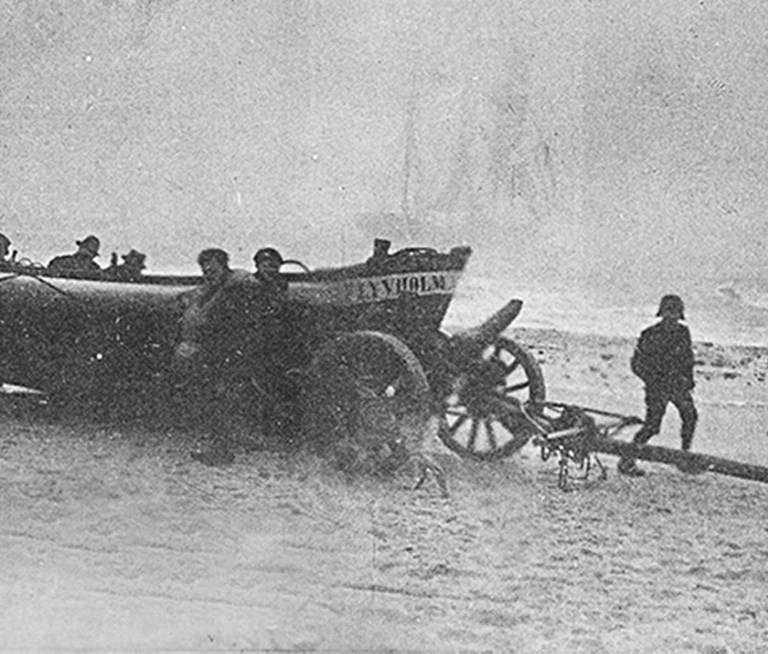 But the rescue crew refused. They had already been battling hard for two days to rescue seamen and passengers from the other stranded vessels and now they were dead on their feet. 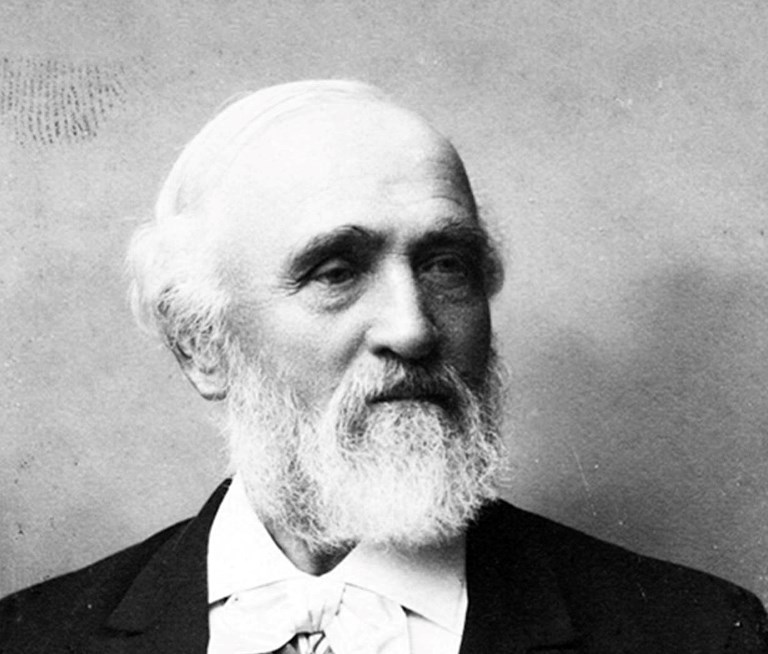 Down on the beach Claudi’s assistant, Anton Andersen, persuaded a Norwegian helmsman to take the rudder of the rescue boat. Rescuer Mads Vrist volunteered and with the assistance of an elderly Englishman and three local men, the boat took to sea. 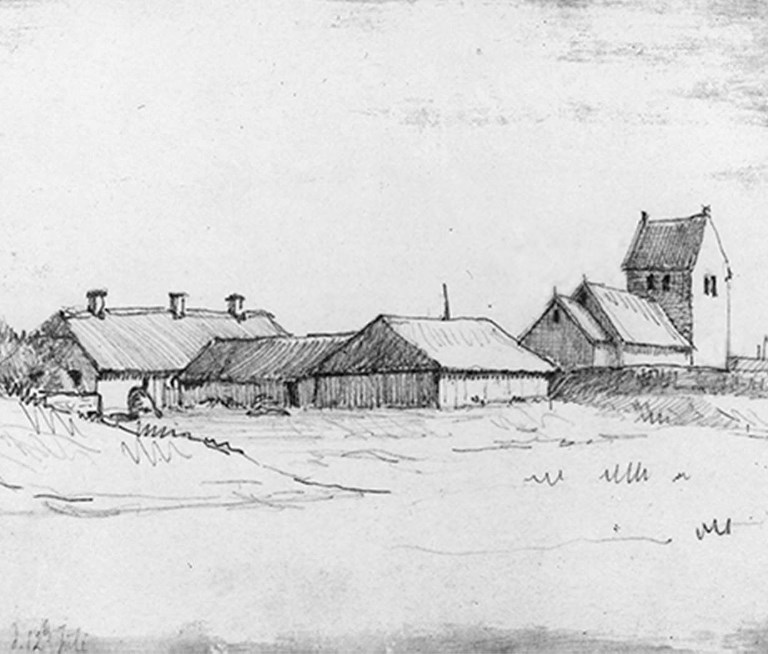 22 people were rescued from the Arctic of Hull while 10 drowned. Amongst these was a two-year-old girl who was washed ashore the same day and was buried in Harboøre graveyard. 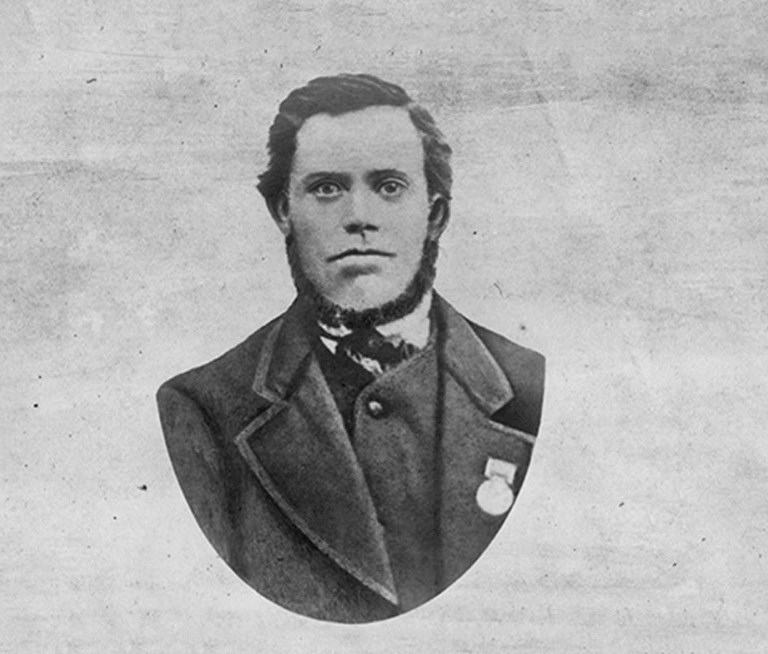 The rescue crew from Flyvholm who had refused to take to sea were found guilty of disobeying orders and dismissed from service. Only rescuer Mads Vrist was allowed to continue working, and he received a British medal.

The stranding of Arctic of Hull was one of the first major tests faced by the Rescue Service and its director, C.B. Claudi. During the mission, the rescuers from Flyvholm station had shown disobedience to their superior and were guilty of dereliction of duty. Both of these things could damage the reputation of the Rescue Service and the disobedient men were dismissed.

Among these was skipper Anders Thuborg. In her book, Det gamle Harboøre (Old Harboøre), his daughter, Karen Thuborg, writes that her father had offered to set out with his crew as the seas were calmer. ”Too bloody late for that now, Anders Thuborg!” replied Claudi, who had otherwise been his close friend. She continues: ”Later, when my father told of this episode, tears would trickle down his cheeks, and he would say: 'That was the toughest day of my life'.”

Anders Thuborg was chosen by Claudi to be boat skipper in 1847 and had helped to rescue 561 from their stricken vessels. When the diver corps was established on Harboøre in 1848, he was the first man to be employed as a diver on the west coast of Jutland.

At the age of 10, Karen Thuborg was a servant in the household of the beach bailiff, Christian Mærsk. These are her memories of the dead child, Eliza Butterworth:

”On the day the steam ship sank, the bailiff came home carrying under one arm a plank which was wrapped up. I remember how curious we all were when he came in at the scullery door, and how astonished we were when he put the plank on the table and uncovered it. There lay the loveliest two year-old child with rosy red cheeks, looking as if it was asleep; but it was dead. It was dressed completely in silk, had patent leather shoes on its feet and a string of pearls about its neck, fastened with a gold locket.

The brother of the baby's mother was among the survivors. He was the second helmsman on the ship. I remember how he cried when he came in and saw the child lying there, smiling as if it was sleeping. It was taken to the vicarage, where the baby's uncle was staying, and arrangements were made for it to be buried in Harboøre cemetery. The child was laid to rest near to the church'es east end, and beautiful roses were planted on the grave, the like of which were scarcely seen before on Harboøre. About the grave was planted sea thrift ('English grass' in Danish), with more sea thrift on the neighbouring plot; it was decided that if ever the body of the mother was washed ashore, she should be buried here. But she never came.”

When the old church was demolished in 1909 and replaced with a larger church, the grave came to lie, together with other children's graves, under the new chancel. On the back of the altar you can see a painted grave text.