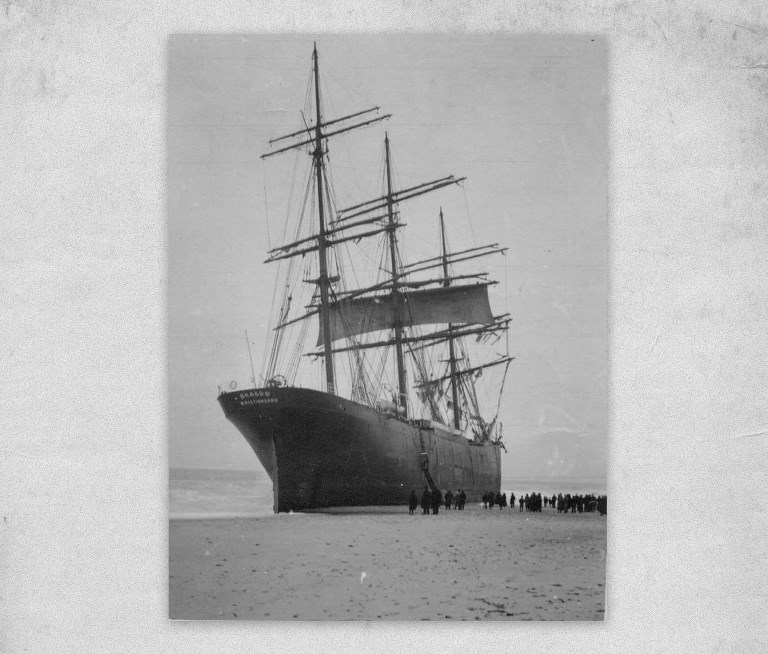 The Norwegian-owned full-rigged ship Bragdø of Kristiansand stranded off Vrist during a storm with hurricane-strength winds on 1st November 1921. 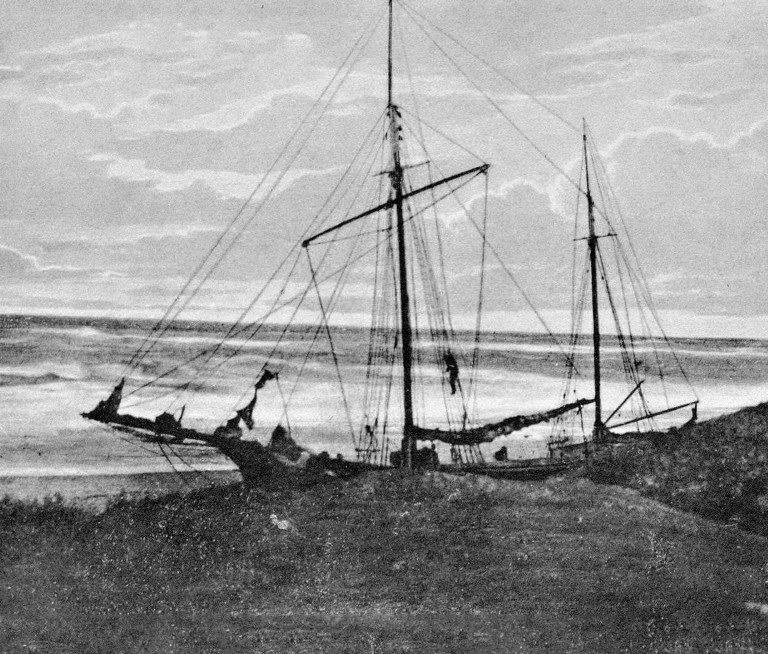 The lifeguard crews from Liløre and Flyvholm had only just returned after attending the stranding of Neerlandia and now had to go out yet again to face the storm. The Bragdø drifted northward and came closer to land. 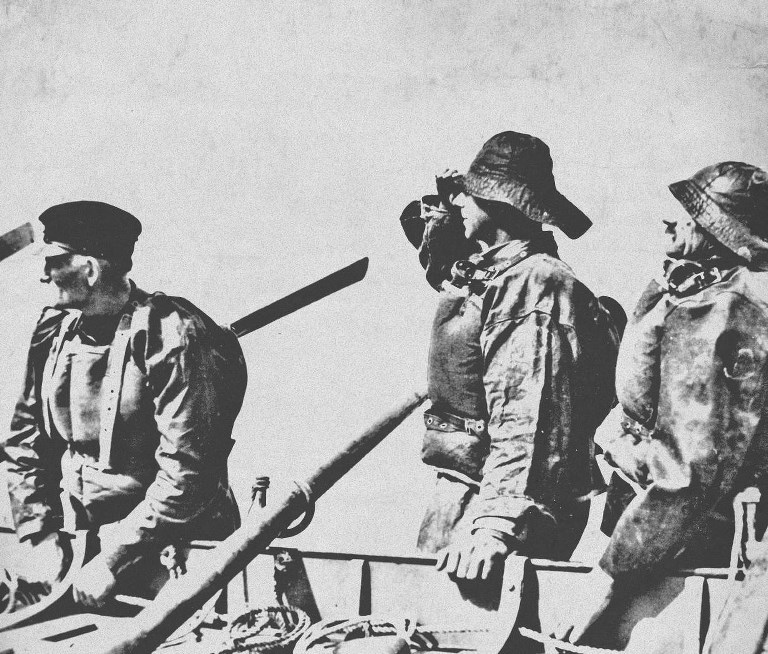 The seas were so rough that it was impossible to take to sea in the lifeboat, and the ship lay beyond the range of the rocket lines. If the crew were to be saved, their only hope was that the waves would lift the ship over the sandbanks without tearing her apart in the process. 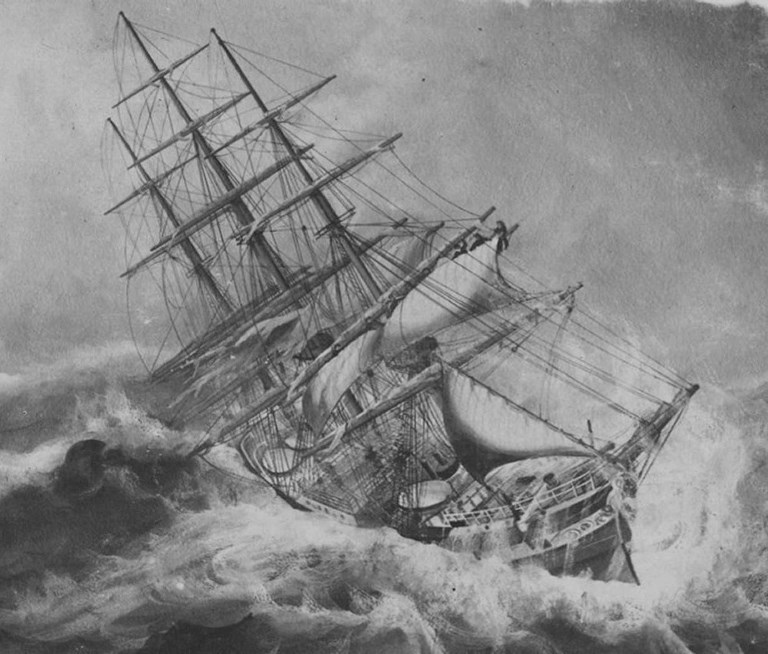 The ship was dragged over the first bank, then keeled over. The next wave drove her towards the coast, and then the same thing happened. The ship keeled over, her decks awash from the massive waves, but she continued to approach land.

In a couple of huge lurches, the breakers lifted her until she came to rest 75 meters off shore. Twenty-six drenched sailors were standing behind the railings, looking expectantly toward the sand dunes and the flat landscape of Harboøre. 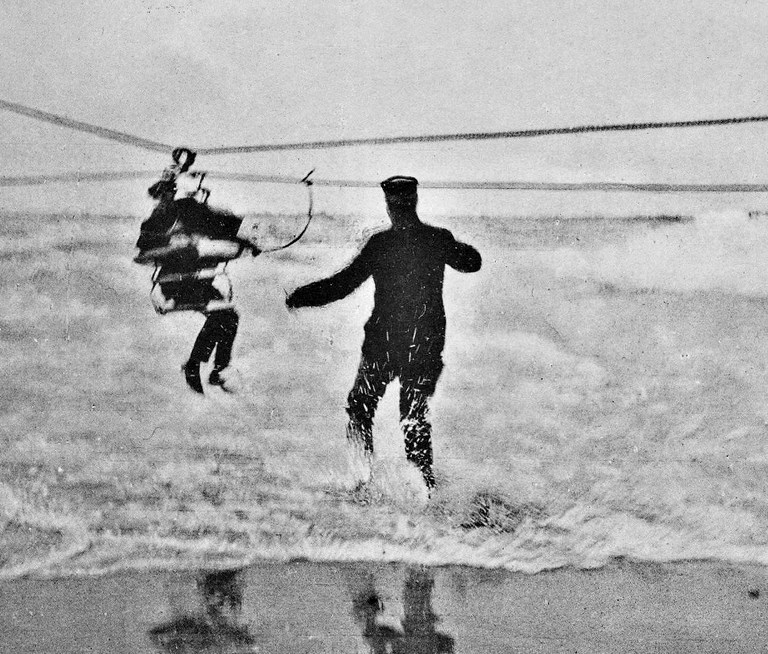 The storm was still raging, but it was possible to bring the crew safely to land by bosun's chair. The last man to leave the ship was the captain. A tall, sturdy Norwegian, who had a small, shaggy ship's dog with him in the bosun's chair. 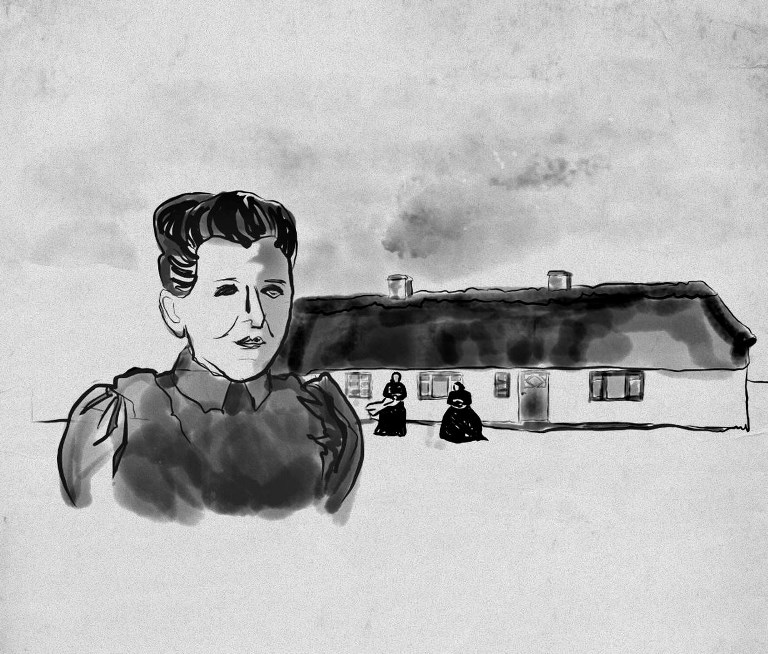 The beach bailiff, Niels Vrist, led the crew over the dunes to the cosy warmth of his quarters, where women were ready to help the strangers with dry clothes and hot drinks. The captain told the story of his ship. 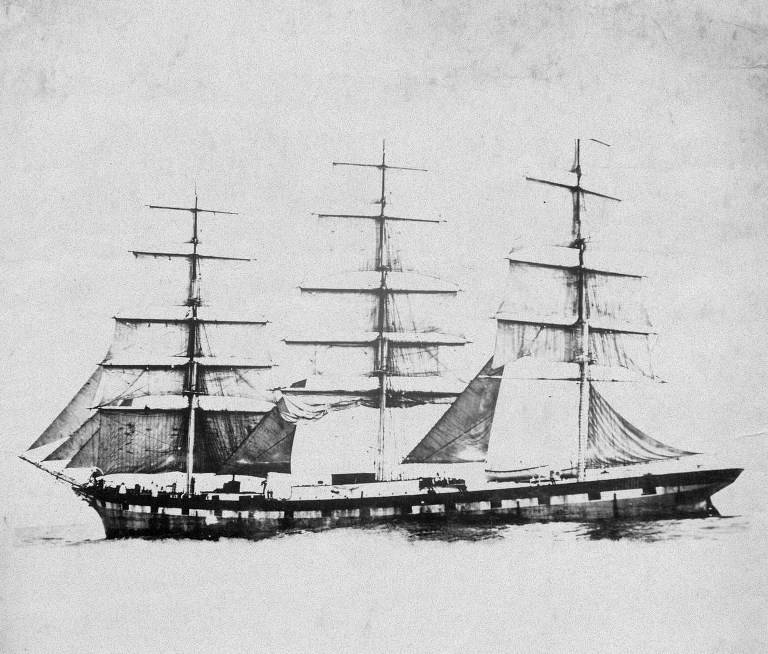 The Bragdø, or Ditton, as she was originally named, had sailed 30 years long-haul between Europe, America and Australia. In 1891 when she was built, she was the largest 3-masted full-rigged ship in the world, and was still impressive to look at. 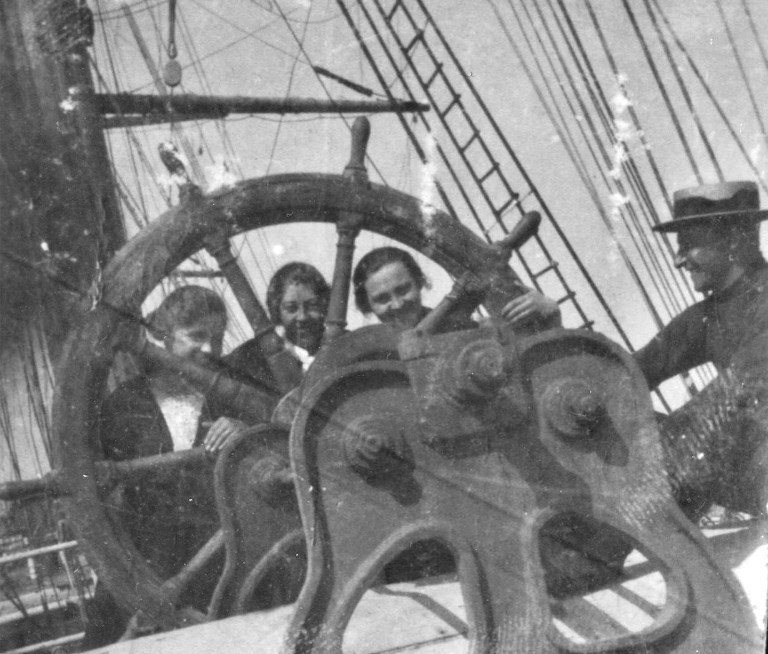 The Bragdø was 315 feet (about 100 meters) from stem to stern and the main mast was roughly 1½ times the height of the Round Tower in Copenhagen. The masts could be seen from as far away as the church at Nr. Lem, east of Lemvig, and the ship attracted many sightseers. 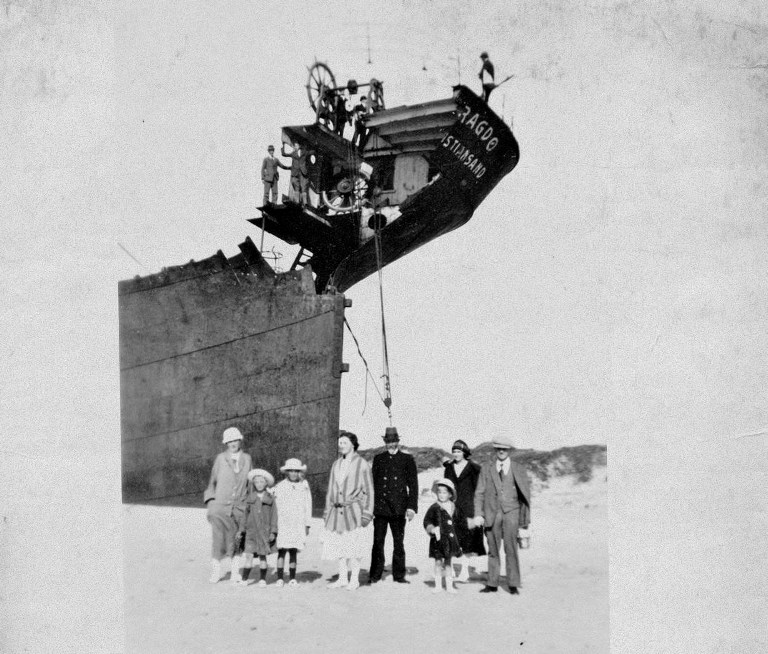 Attempts to pull the Bragdø free were abandoned. Her fixtures and fittings, cargo and hull were sold by stranding auction. Over the year that followed, the ship was broken up on the beach. About 1500 tons of iron were removed from the hull and resmelted. 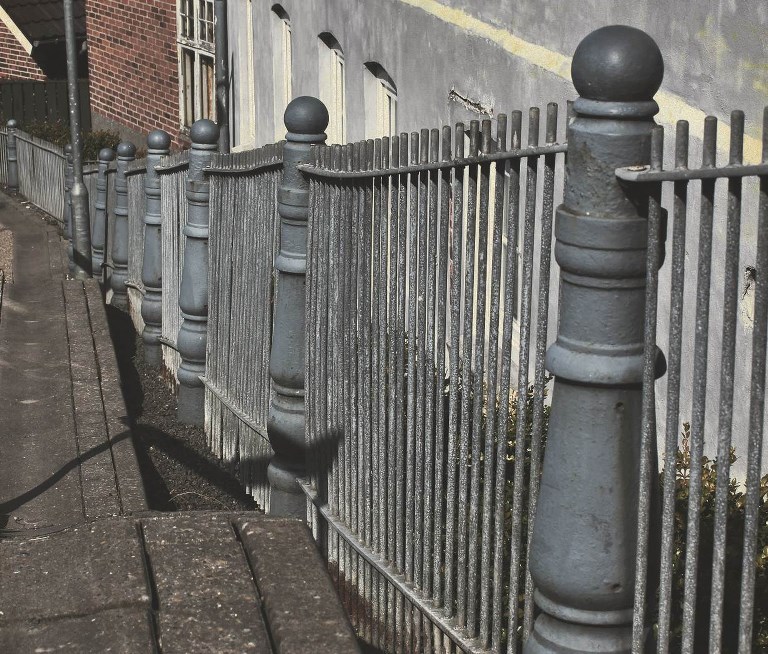 The massive cast iron pillars from the Bragdø's top deck can still be seen. A man from Lemvig bought them and re-used them at his house near Banegårdsstien in Lemvig.

In the latter half of the 19th century, steam ships were well on their way to making sailing ships obsolete. The steam ships were becoming larger, faster and more efficient. The traditional ship builders therefore started to build new ocean-going clippers of steel. These new ships handled well and were built to be sailed hard. They also had the advantage over steam-driven ships that they were not dependant on fuel supplies and could remain at sea for months.

Bragdø – or ”Ditton”, as she was originally named – had been built in England in 1891. At that time, she was the world's largest three-masted fully rigged sailing ship. Over the next 30 years, she completed 19 trips between Europe and North America , South America and Australia. A journey from Newcastle to San Francisco could take anything from 79 to 180 days.

When Bragdø stranded off the coast at Vrist it was the first time that she had sailed through the North Sea. The reason for this was that she was on her way to Kristiansand, to be laid up. An article in the Australian newspaper, The Marlborough Express, dated 15th March 1920 tells of her last long-haul voyage:

”Bragdø sailed from New York on 7th February 1919, bound for Sydney. Heavily encrusted with barnacles*, she sailed slowly and laboriously into Sydney harbour on 1st March 1920. She had been under way for more than one year. Shortly after leaving New York, she was caught in a terrible storm. First one, then two masts were lost overboard. Stripped of her rigging and completely helpless, she lay at the mercy of the waves, until a passing Greek steamer towed her to Bermuda. Here she waited for 8 months, while new equipment and rigging were sent from New York and fitted. She then continued on her journey. It was not possible to put her in dry dock, and she had accumulated barnacles by the time she set sail for Australia. Owing to the barnacles, she could only make 6 knots instead of her usual 12.”

*Barnacles are small crustaceans which form cone-shaped shells of calcium. They are also found in Danish territorial waters.

On the trail of Bragdø

Bragdø of Kristiansand was one of the largest ships ever to be stranded on the coast. Her masts were so tall that they could be seen from Nr. Lem church near Lemvig, some 12 kilometres away.

At Vestergård farm in the parish of Flynder, the entrance to the main house is decorated with impressive balusters from Bragdø. The balusters originated from her poop deck, a part of the ship's aft superstructure.

The massive cast iron bollards from the Bragdø's top deck can still be seen on the Station Road (Banegårdsstien) in Lemvig.