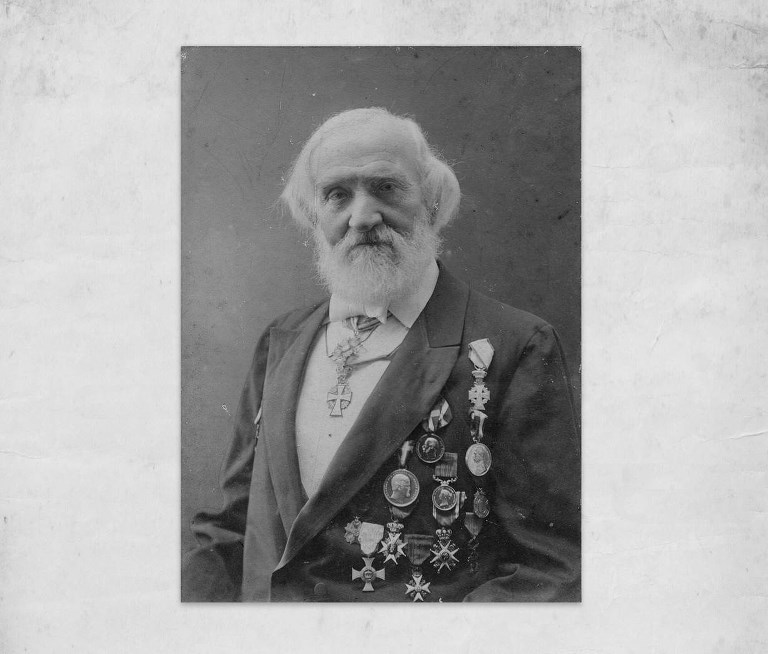 On New Year's Eve 1899 the Scottish brig Ocean Belle of Aberystwyth sank off Bøvling Klit. The accident was the cause of criticism of the Danish Lifeboats Service and its director Anthon Andersen. Not all was as it should have been. 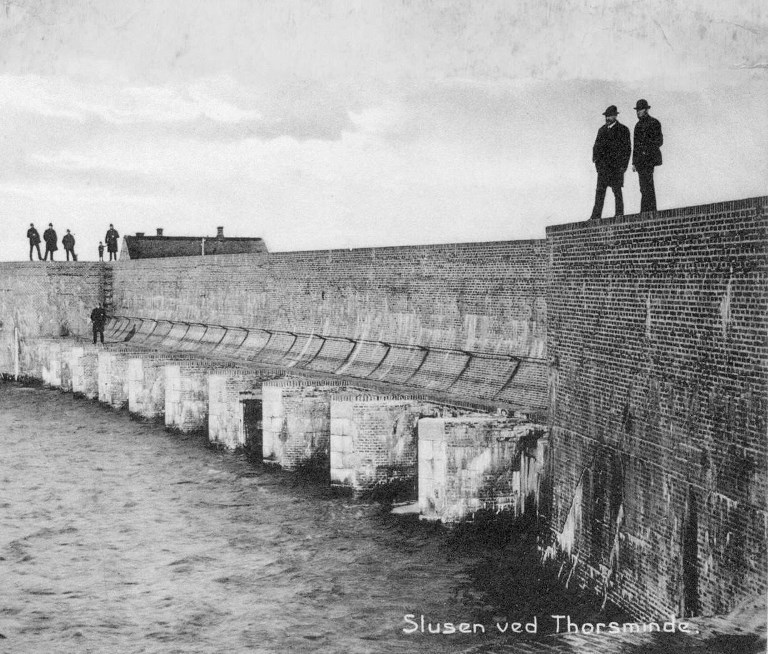 On 31st December the Ocean Belle was seen south of Thorsminde. According to the Lifeboats Service incident report, Thorsminde rescue station observed the ship sailing north. 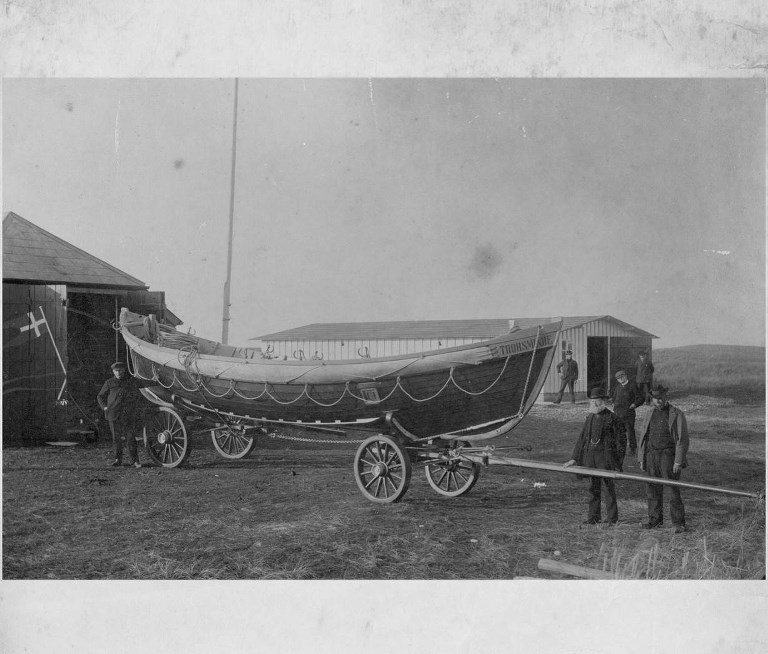 At about 20:00 the ship lit a flare. It was in distress. Crew members from the rescue station gave chase to the ship with the lifeboat on the beach. But halfway between Thorsminde and Fjaltring the flare suddenly disappeared. 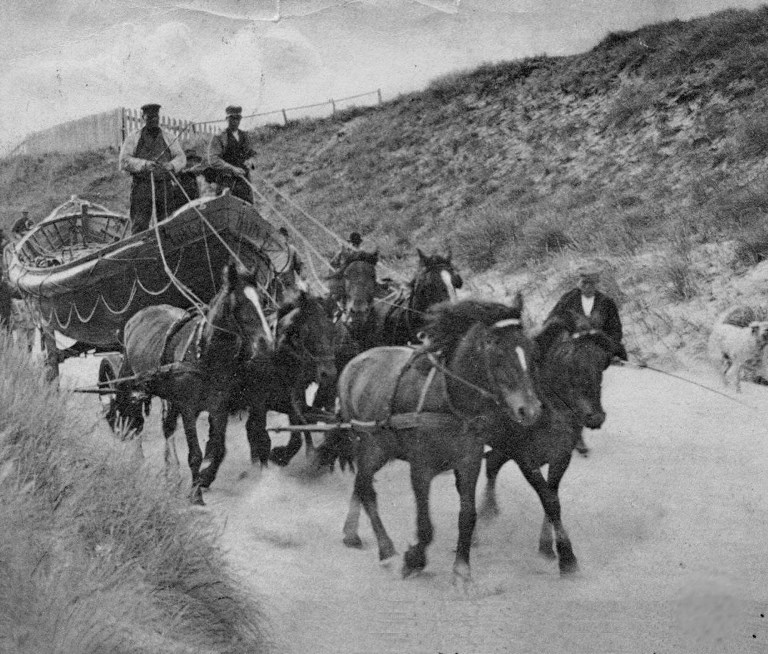 When the rescuers arrived on scene, large quantities of flotsam were observed washing up on the beach. The area was patrolled throughout the night. The ship's boat and 7 emergency buoys came ashore, but there was no sign of the crew. 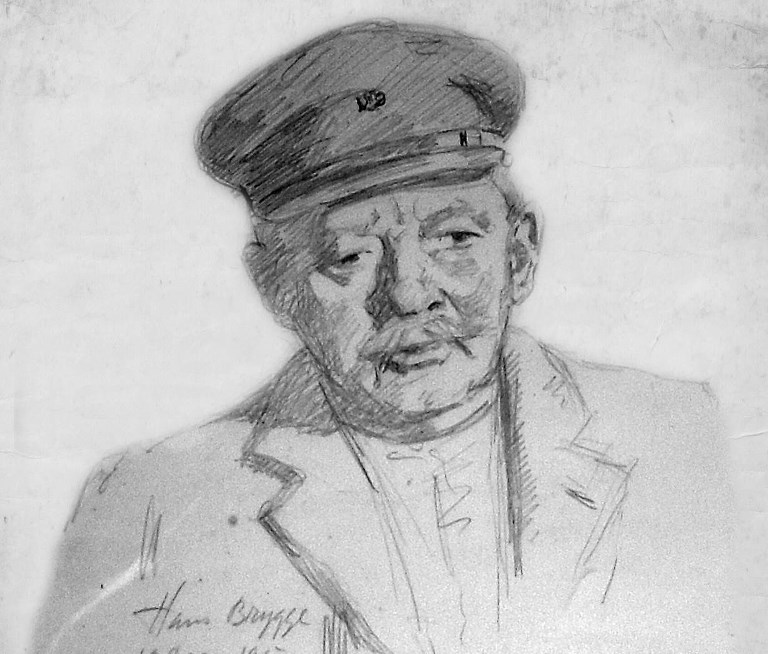 The Lifeboat Service stated that they had done everything possible to assist in the incident of the wreck of the Ocean Belle. However, this did not accord with what postman and journalist for Fiskeritidende, Andreas Nielsen, had heard. 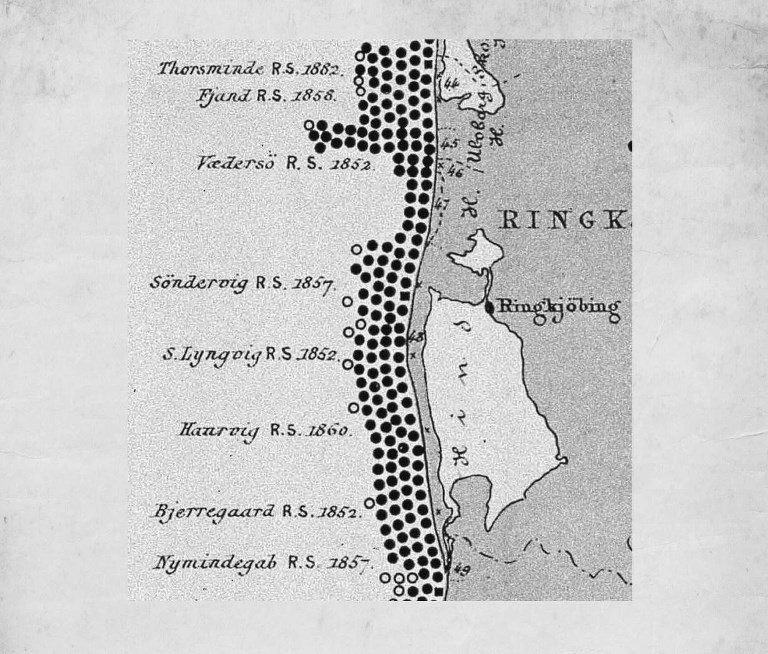 Andreas Nielsen did some research into the incident and found that the Ocean Belle had been seen earlier that day in the vicinity of Nymindegab with her distress signal flag flying. On her journey northward she had passed no fewer than 7 rescue stations. 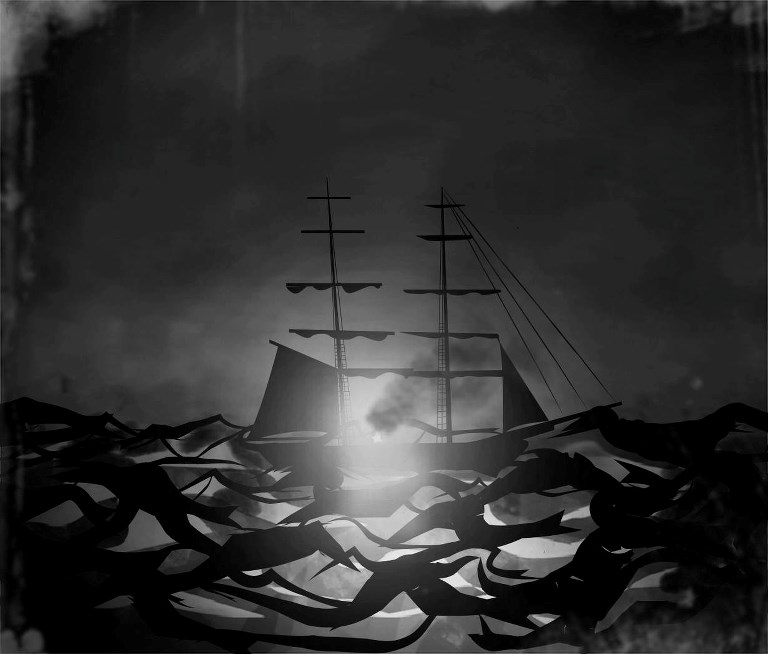 The rescue crew at Fjand station was alerted, while the ship burnt flares. As it proceeded north, the station manager, according to Andreas Nielsen's sources, passed the message to Thorsminde that the ship was on its way. 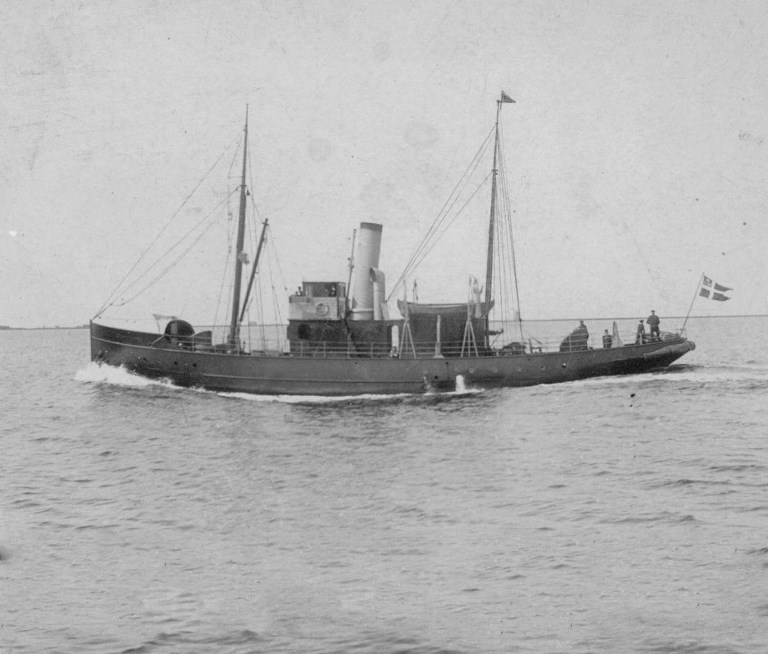 The question puzzling Andreas Nielsen at this point was: why did the manager at the coastal rescue station not summon the assistance of the steam-driven lifeboat, Vestkysten? It had previously come to the aid of ships in distress. 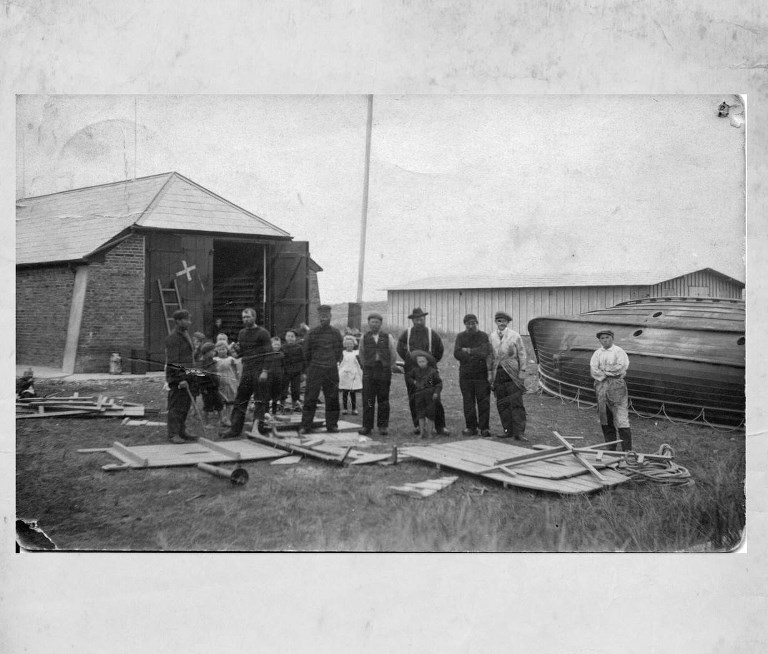 Instead, the lifeboat crew at Thorsminde had indeed been alerted. But that they had followed the Ocean Belle on the beach with the lifeboat was a lie. 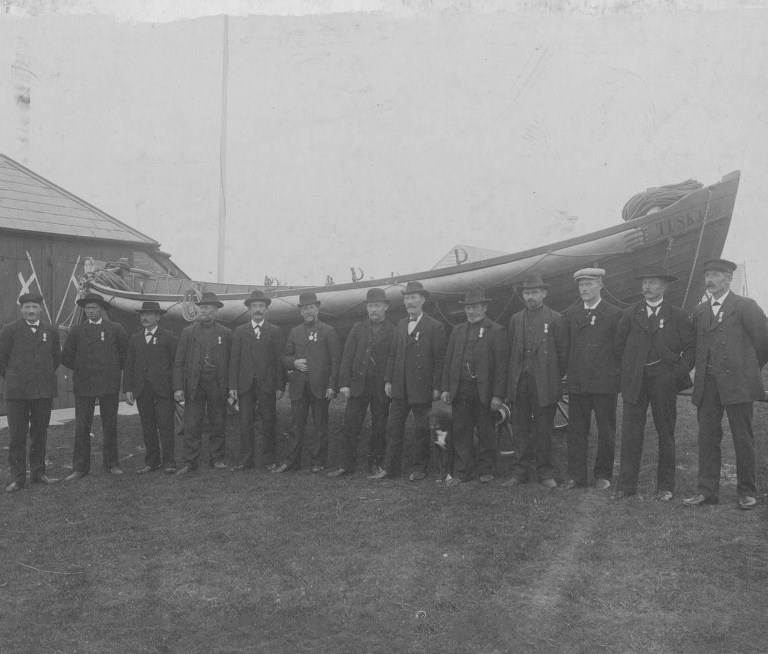 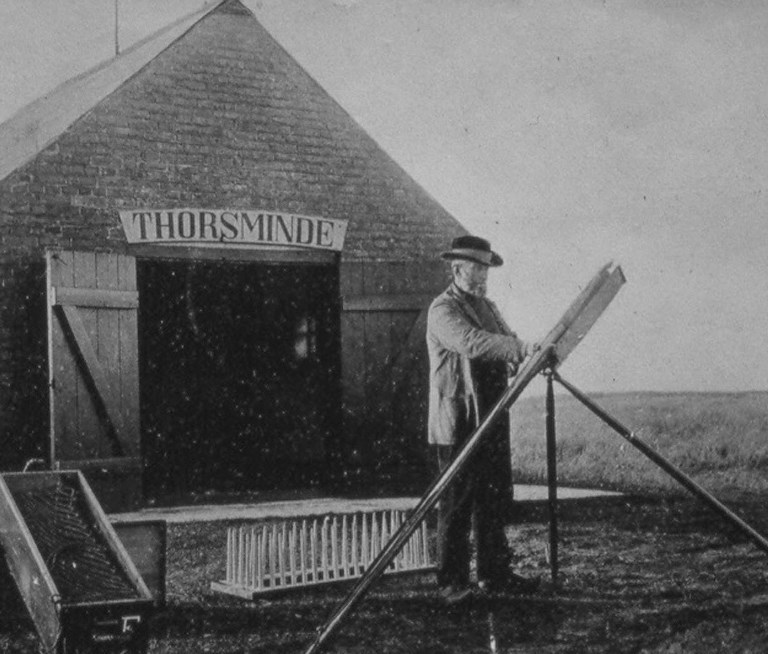 Thorsminde was a rocket station. In order to transport the rocket equipment, the rescuers had a barrow with two wheels, which they had to manhandle through the sand dunes and lyme grass. An impossible job. 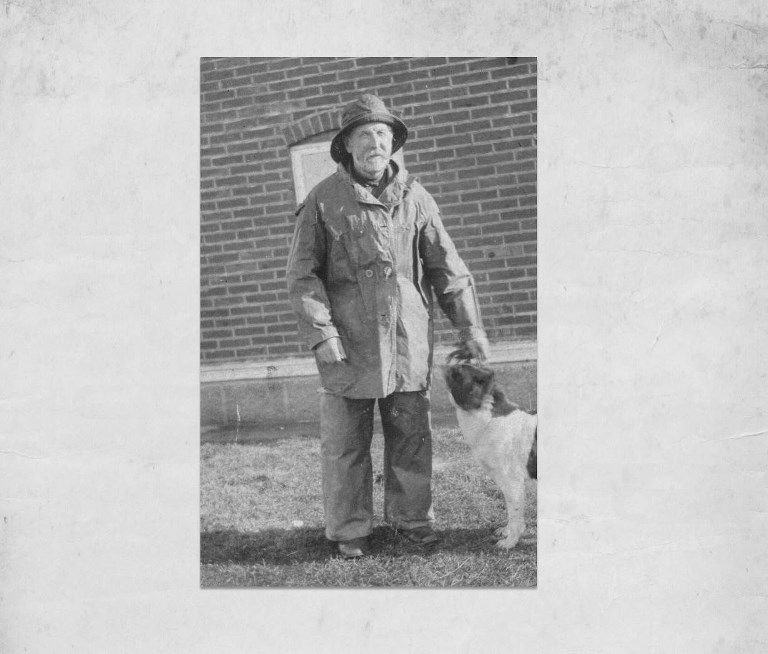 According to Andreas Nielsen's information, there was a single beach guard on watch duty when the Ocean Belle went down. Only after the tragedy had occurred did the men and rockets from Thorsminde reach the scene. 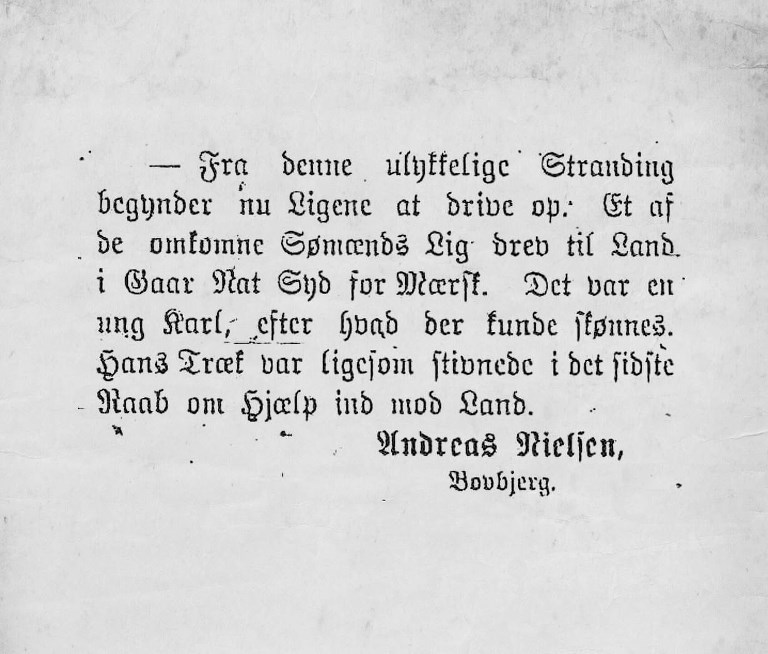 Seven crew members died in the wreck of the Ocean Belle. Andreas Nielsen attacked the leadership of the Lifeboat Service in a series of articles in Lemvig Folkeblad. His criticism was rejected out of hand.

The Rescue Service and the press

Had it not been for Andreas Nielsen's newspaper articles, we would not have learned much about the circumstances of the wreck of the Ocean Belle. The historical archives of the Rescue Service report only those missions in which lives were saved. The incidents in which the rescue services were powerless to help are not described in any detail.

The rescue service missions were obviously very newsworthy. When things went well, the lifeguards were hailed as heroes. When they went badly, the criticism was harsh and implacable. The director of the rescue service, Anthon Andersen, had a reputation for his stinging remarks in speech and on paper, but we do not know if it was he who responded to a critical article by Andreas Nielsen, which appeared in the Danish Fisheries Association's newsletter on 11th January 1900.

An extract of the article, titled ”Tragic Shipwreck” from Danish Fisheries Association's newsletter on 11th January 1900:

”A couple of newspapers have accused the rescue service of doing too little to help the crew (ed. of the Ocean Belle). But these claims are completely groundless. The tragedy struck so suddenly and without warning, that nothing could be done. Had the ship instead made straight for the coast, the crew would undoubtedly have been saved.”

According to the church records at Ferring, the body of Richard Williams, the captain of the Ocean Belle, was recovered from the tide line at Ferring on 26th January 1900 and subsequently buried at Lemvig cemetery. He was judged to be in his 50s and under ”remarks” the cause of death is given as: ”Drowning during tragic incident”.

The Ocean Belle had been a central part of the lives of Richard Williams and his family. In 1875 he was appointed captain of the ship, but prior to that he had been the ship's mate, just as two of his brothers and one of his cousins had also been. On her last journey, one of Capt. Williams' nephews was the ship's mate.

The rescue station at Thorsminde was established in 1882 as a rocket station. In 1886 the station was equipped with a lifeboat, but since there were too few locals to crew it, it was decided to provide a crew from the neighbouring rescue station at Tuskær. When the boat was required to be launched, they used a team of draught horses from Fjaltring. However, conditions at Thorsminde gradually improved. In 1890, a boathouse was built, but stables for the horses were not available until 1905.

From boat house to church

In 1935 Thorsminde Rescue Station got a motor driven lifeboat, and a new boathouse was therefore built to house it. The old boathouse was sold, and in 1939 it was consecrated as a church for the steadily increasing population of Thorsminde.