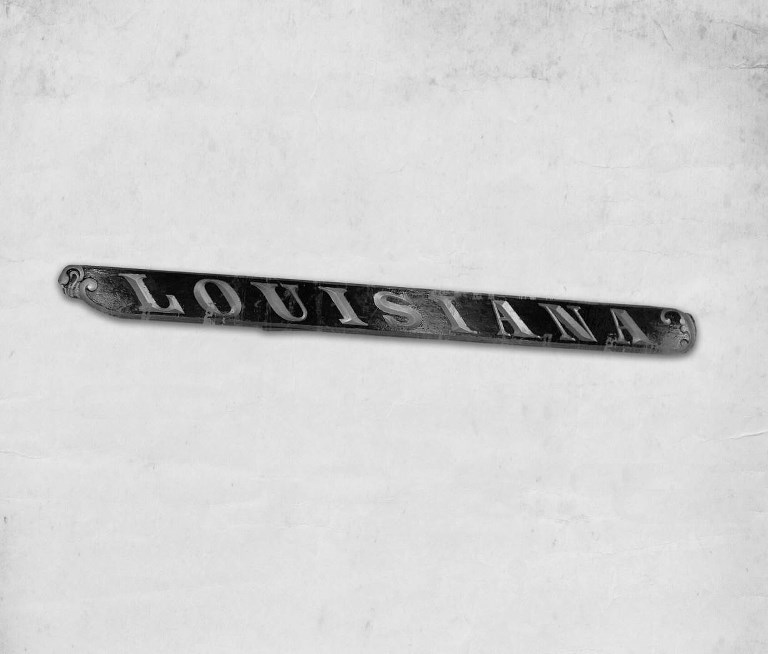 The barque Louisiana of Bremerhaven was on her maiden voyage bound for New York. The Louisiana was built as an emigration ship with space for 500 emigrants. Fortunately, she was only loaded with goods for her first voyage for it ended suddenly. (23/1 1868) 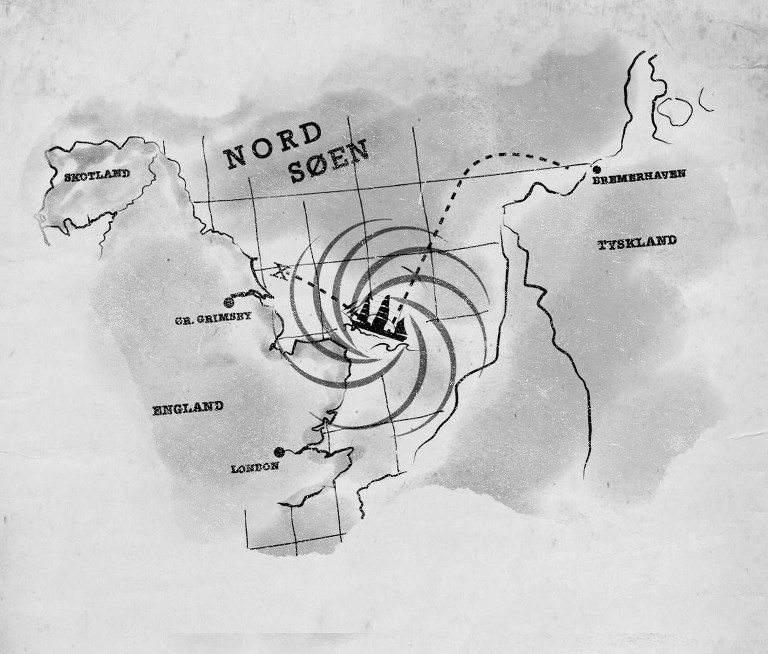 Due to bad weather Captain August Heidorn decided against cruising out through the English Channel. Instead, he followed the eastern coast of England to sail north of Scotland. 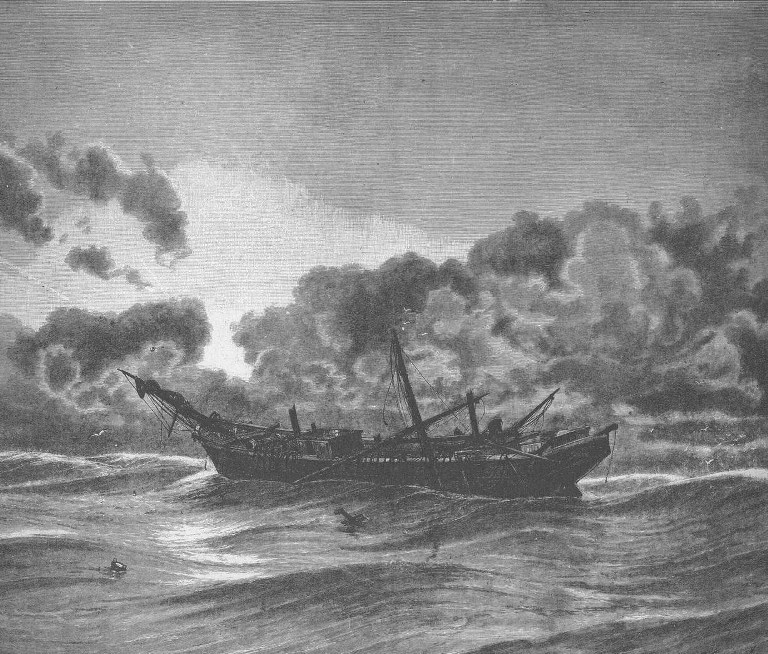 But off Grimsby the rigging plates gave way and the masts and rigging went overboard. The barque was now adrift over the North Sea. 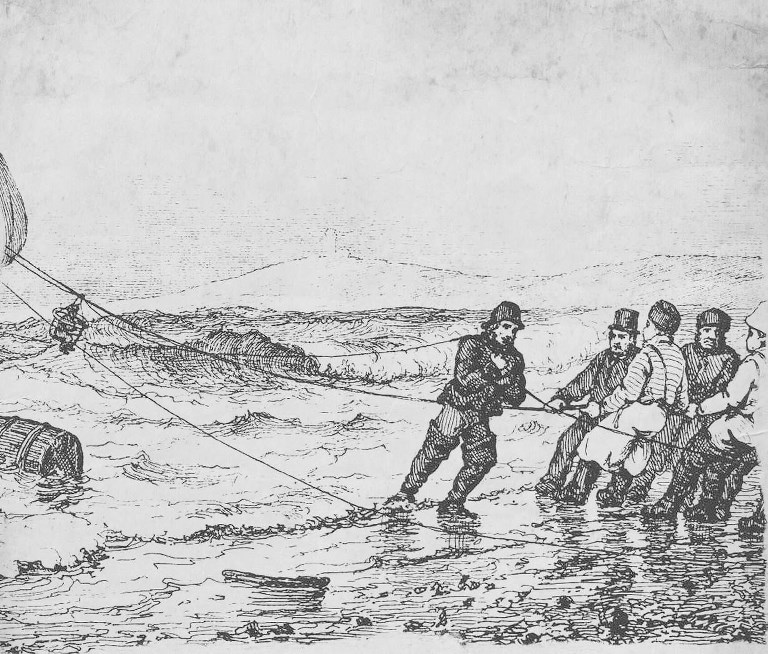 The inhabitants of Fjaltring observed a mastless ship half a mile NW of Tuskær rescue station. The weather was stormy with a very high sea, but the crew of the lifeboat prepared the rockets and launched the boat. 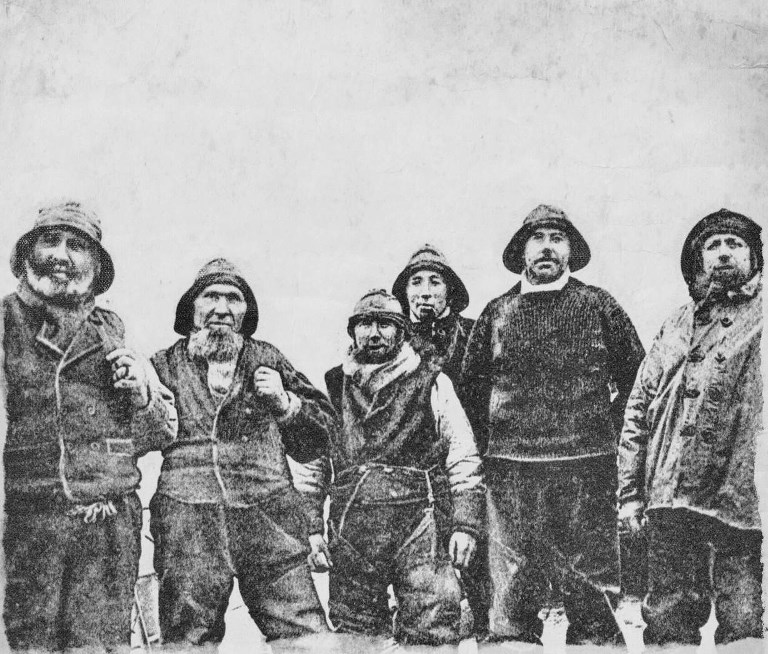 Louisiana’s crew of 21 and 2 fishermen from Grimsby who had come to help the ship in the North Sea were saved. 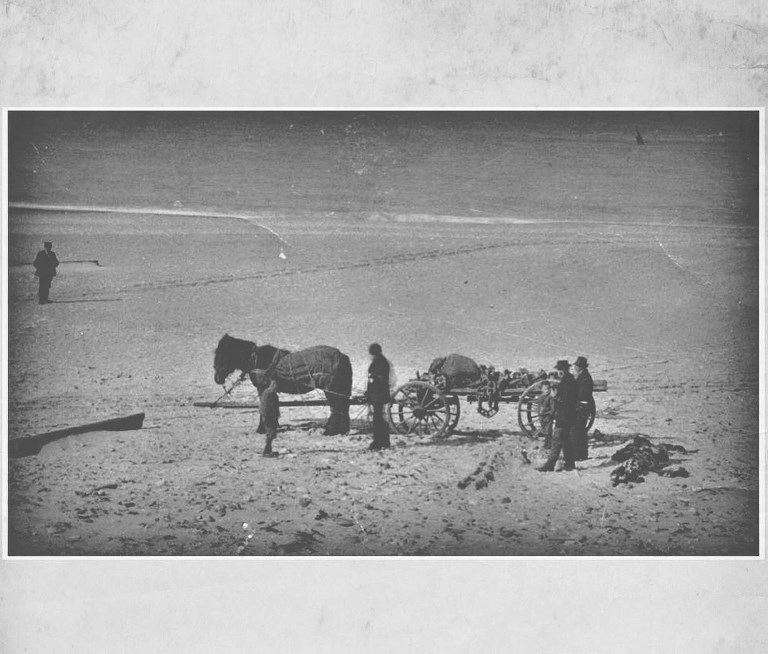 The following days were spent salvaging the cargo of packages. Interested buyers could read in the newspapers that lots for sale under a stranding auction included wine, coffee, rice, large quantities of cotton and cotton stockings, as well as dolls and other toys. (29/2 1868) 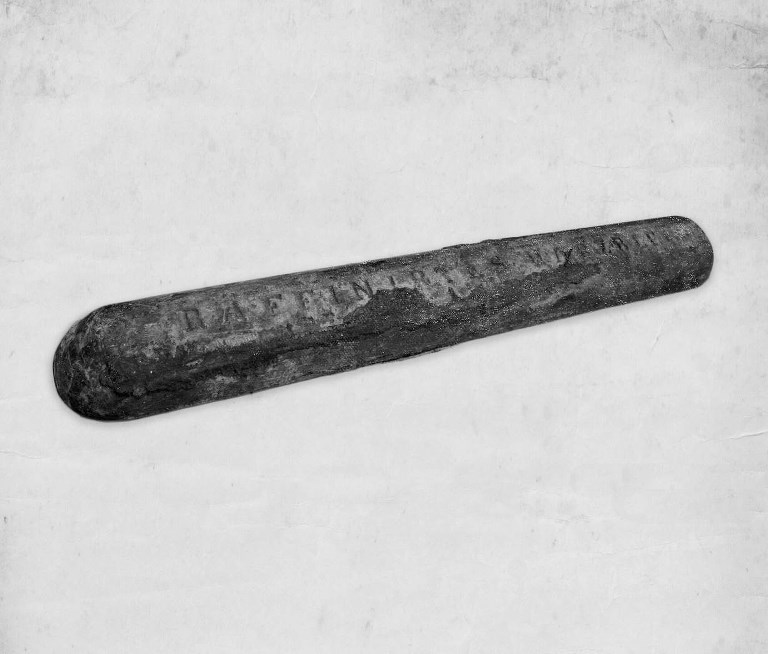 At the bottom of the hold lay 70 kg bars of lead and iron. This particularly valuable cargo was not immediately salvageable. 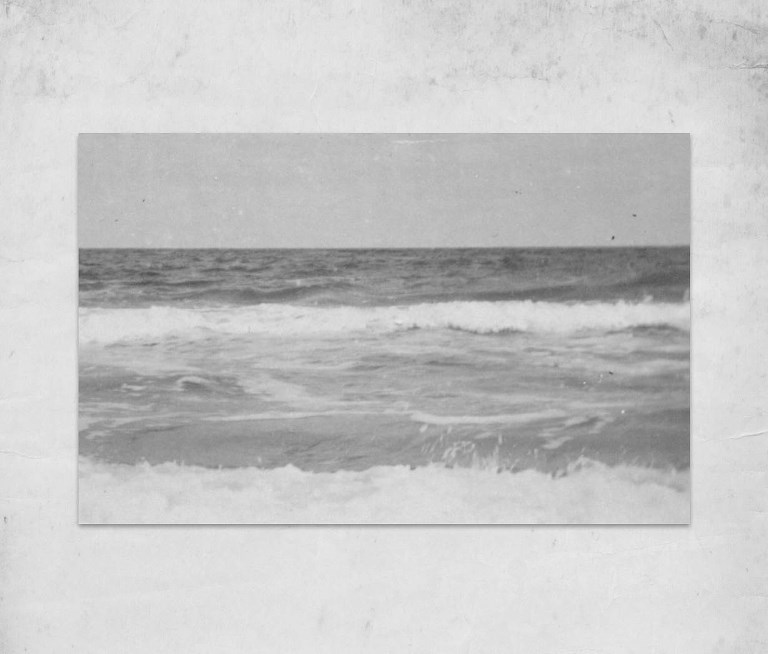 The storm had driven the ship nearly up as far as the dunes. The heavy hull sank deep into the sandy beach and during the next storm the ship was torn apart by the waves. The wreck and the remaining cargo disappeared into the sea. (3/3 1868) 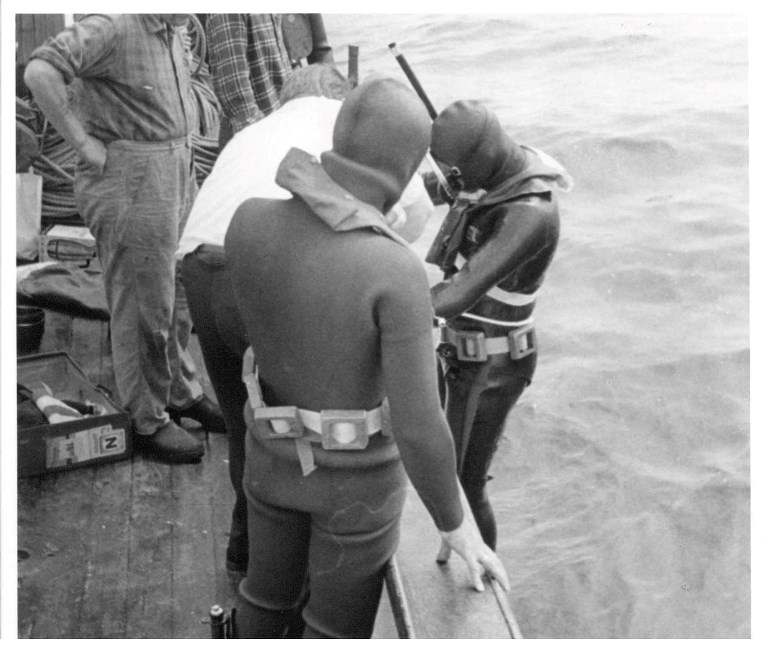 It lay among the sandbanks for the next 115 years until it was discovered by divers. Violent winter storms in 1981 and 1982 shifted the sands and the ship was visible once again on the seabed. 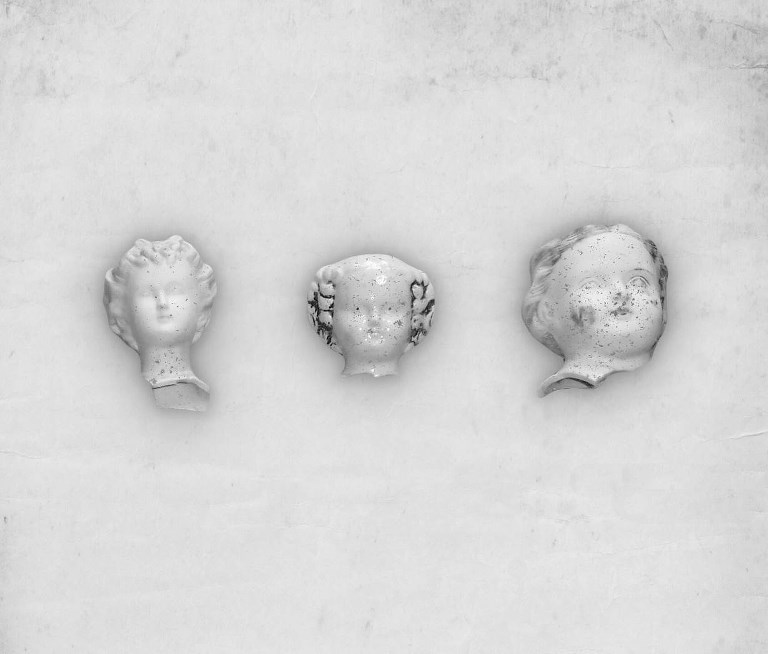 The wreck lay approx. 500 metres from the shore at a depth of 7-8 metres. Apart from the lead and iron bars, divers found dolls, parts of dolls and porcelain crockery for dolls houses, small melting pots and several hundred thousand slate pencils.

A stranding seen from the coast

Karen Thuborg was born in 1849 and grew up in Harboøre. This is her description of a stranding, as seen from the coast:

”You could tell from a vessel some way off on the rough seas, whether she would be able to avoid running aground. Otherwise, she would come staggering, like a drunk man on a street. When a ship approached, she might seem to be stuck on the outermost sandbank – and indeed, sometimes, she was. But just then, she would gather speed and totter over to the other sandbank. Often, she would remain there, especially if she was heavily laden, or if she had sprung a leak on the outermost sandbank. But if it was around high tide, she could lurch forward again on the waves until she finally became stuck – either on the nearest sandbank or the tide line. If the vessel only had ballast in her hold, she could be driven so far onto the coast that she would be left standing high and dry when the tide went out.”

A stranding like Louisiana of Bremerhaven meant extra income for the families of fishermen living on the coast.
The coast was divided up between salvage lodges, each of which was responsible for its own district. There were special rules for the salvage lodges, where membership was restricted to any: ”(…) locally resident, hardworking man of good repute possessing sufficient maritime knowledge as to be considered qualified as a salvager.”

If a man met these criteria, he could not be refused membership of the salvage lodge. Salvage work was important for everyone on the coast. Thus, the widow of a salvager was also entitled to become a member of the lodge, if she could provide another suitably qualified man.

When a ship was stranded, it was the salvage lodge that was responsible for removing its goods and cargo. This often meant several days' work with good wages. It was also the salvage lodge that would take care of presenting the cargo at stranding auction. Afterwards came the job of breaking the ship up, separating and sorting the timber, iron and anything useful from the wreck which would be sold at another stranding auction.

Advertisement for a stranding auction

An advert placed in the newspaper, Thisted Amtsavis, on 7th March 1868 after the battering Louisiana of Bremerhaven took in the following storm:

”A good deal of provisions consisting of: salt beef and pork, smoked hams, butter, coffee and peas etc. Ship's inventory consisting of: A mahogany sofa and table, chairs, mattresses, oaken water casks, a large quantity of rope, sheathing metal, wrought iron and painting equipment etc. A large amount of ship's timbers in oak and pine suitable as fuel and much else. Amongst this, of particular note, a quantity of deck planking in best quality red pine, and over 46 barrels (7.82 cubic metres) of coking coal in sacks.”