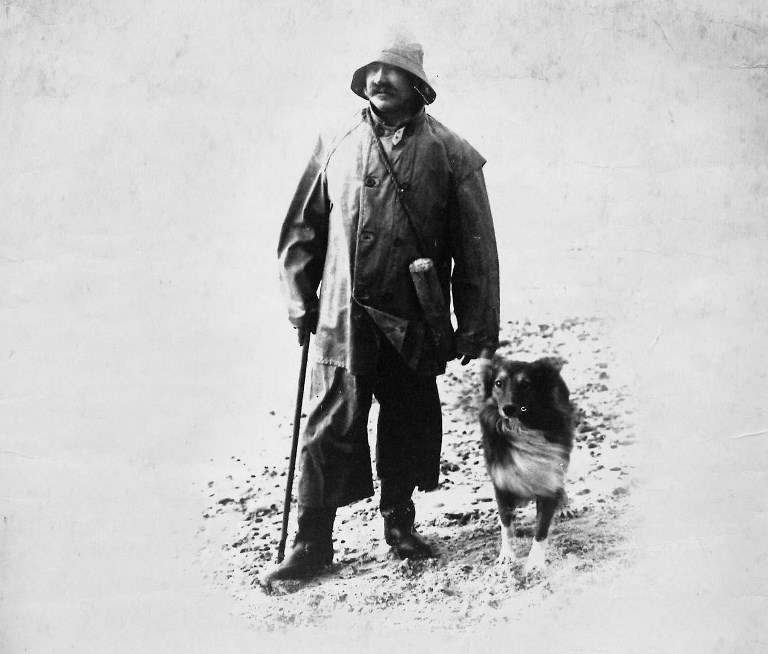 At 06:00 on a foggy and rainy morning, the beach guard telephoned to Ole Jespersen who was the beach bailiff and manager at Tuskær rescue station. A large steamship had run aground. 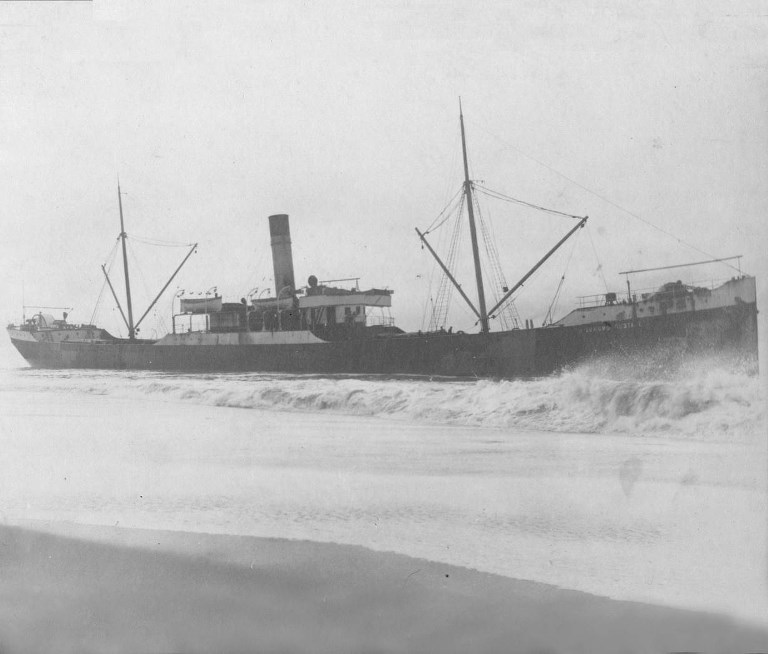 The steamer was Edmond Gustave of Marseille en route to Stettin in Poland heavily laden with artificial mineral fertiliser and oilseed cake. 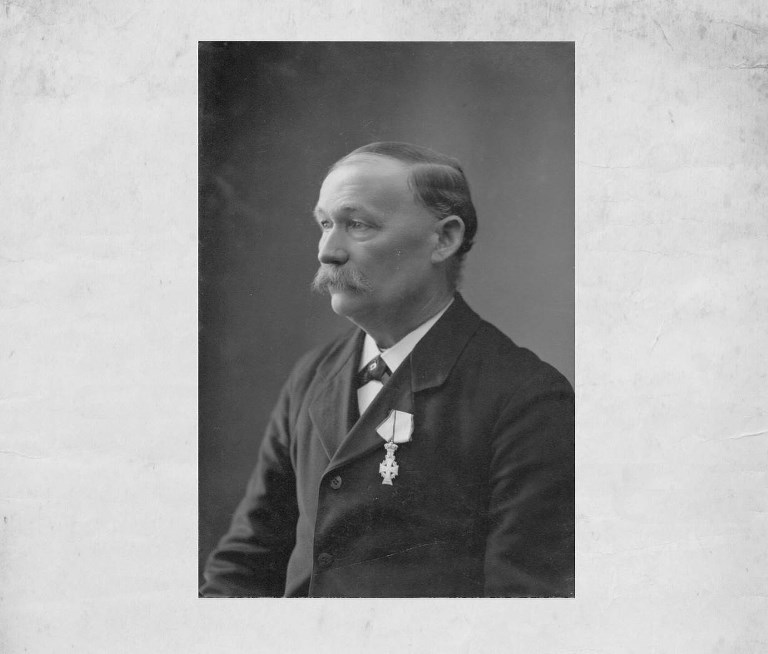 As the seas were heavy, Ole Jespersen summoned the rescuers and transport team and prepared to go into action. Little did they know that the daunting task facing them would stretch over nine days.

The rescue boat was rowed out to the grounded vessel. But the captain and his crew of 25 refused to leave their ship. Only two came ashore in order to send a telegram to the salvage company Svitzer. 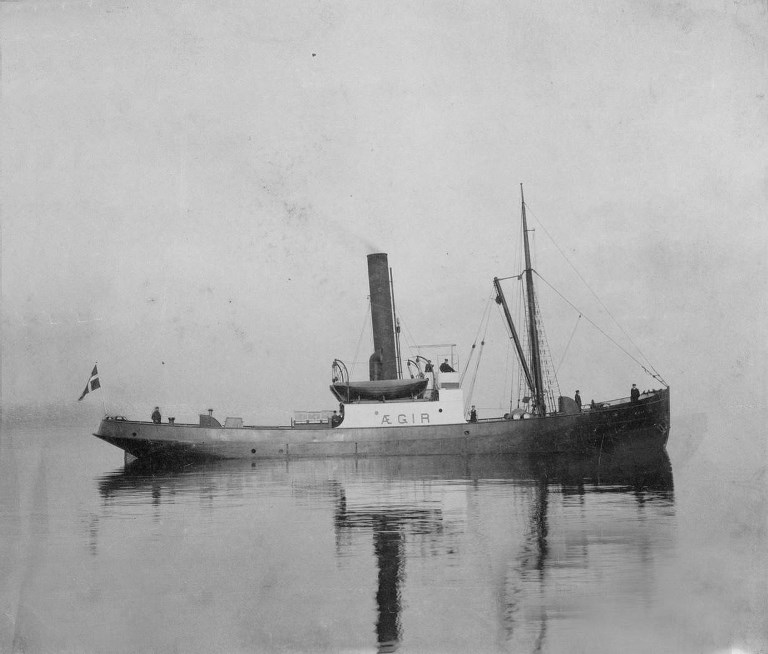 The weather situation could quickly worsen, so a letter in French was written to the captain to explain the dangers facing his crew. But they remained where they were and later that day the salvage steamship Ægir arrived. 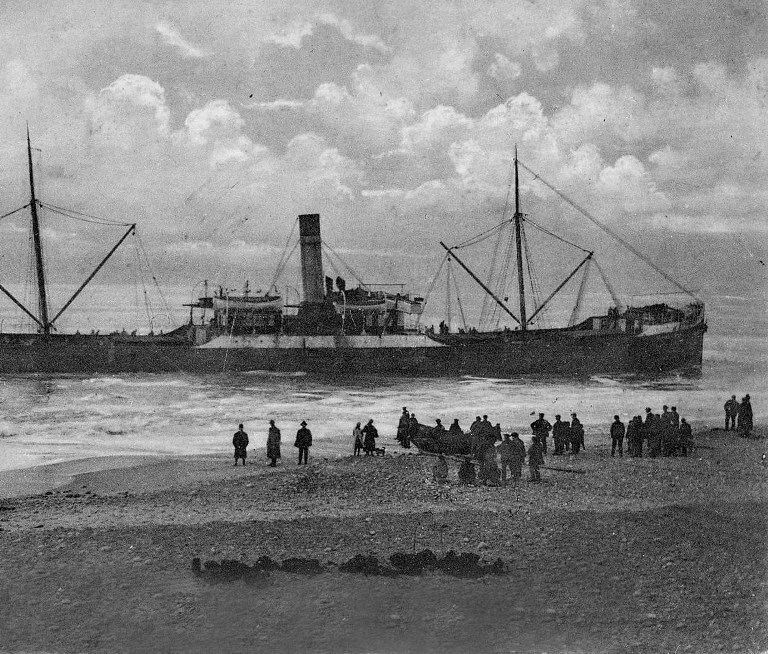 The next day, the wind had dropped and local salvagers were sailed out to the stricken vessel. Their job was to lighten the load, so they set about throwing the cargo overboard. 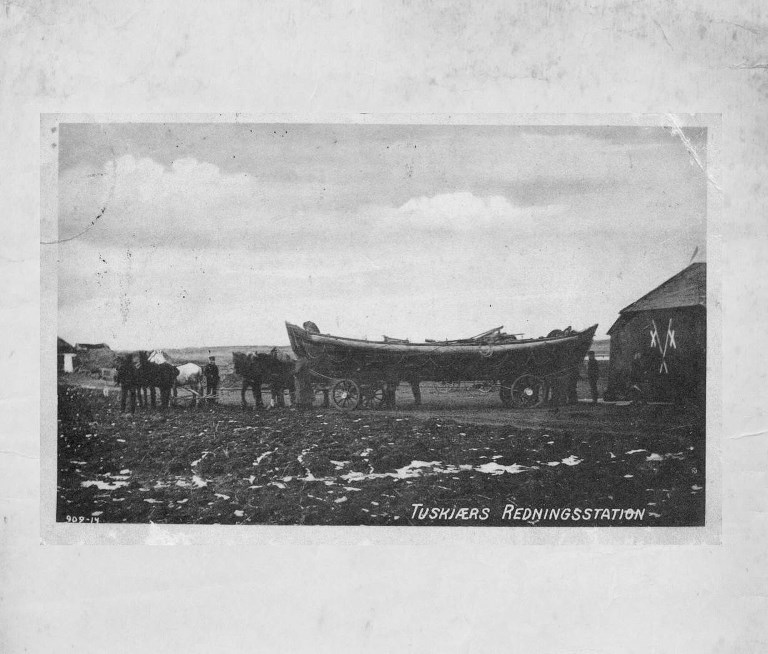 Manager Ole Jespersen instructed the lifeboat crew to return to their station, where they cleaned the boat and stowed away. But the same evening the sea rose again and Jespersen once again had to summon the lifeboat. 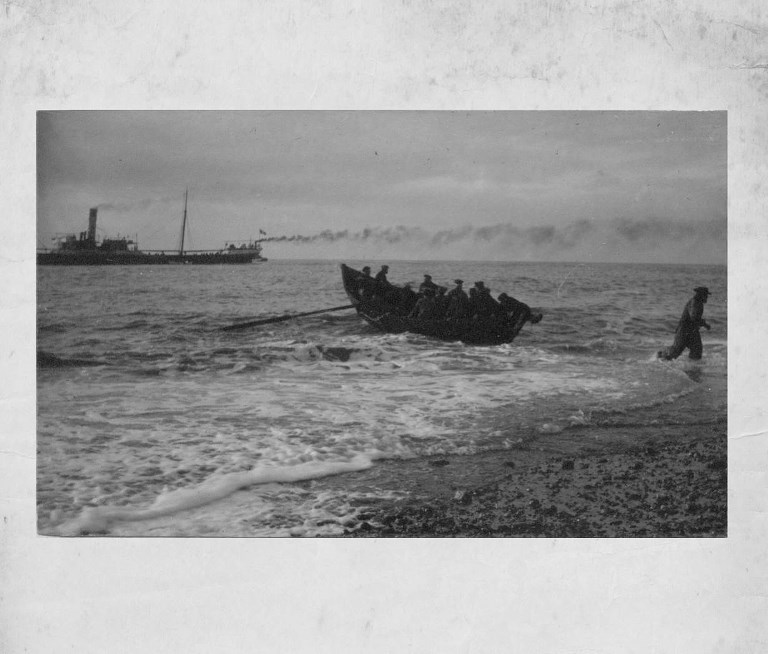 The rescue boat was rowed out to the ship, but the crew would still not abandon their posts. 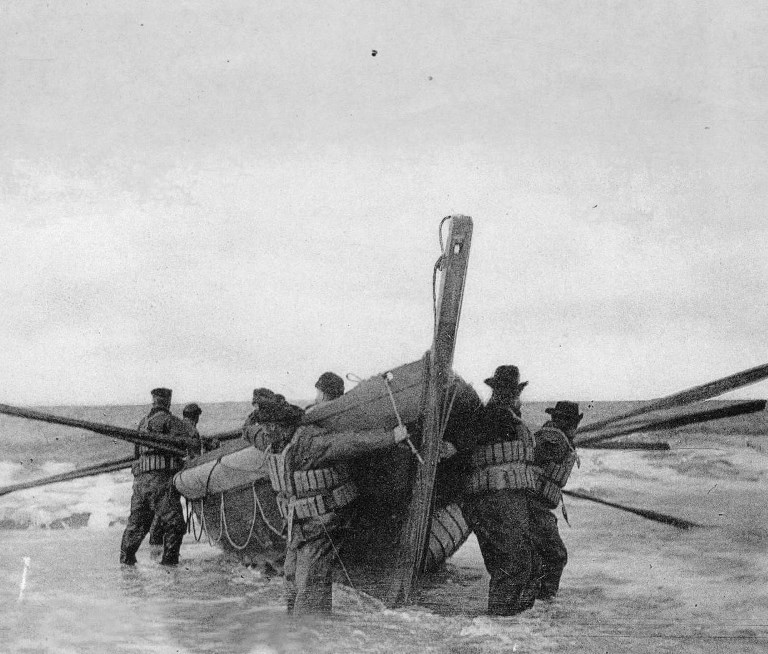 The following morning, the winds increased to near gale force. The decision was therefore taken to row out to the Edmond Gustave one last time, before the storm rendered any rescue attempt impossible. 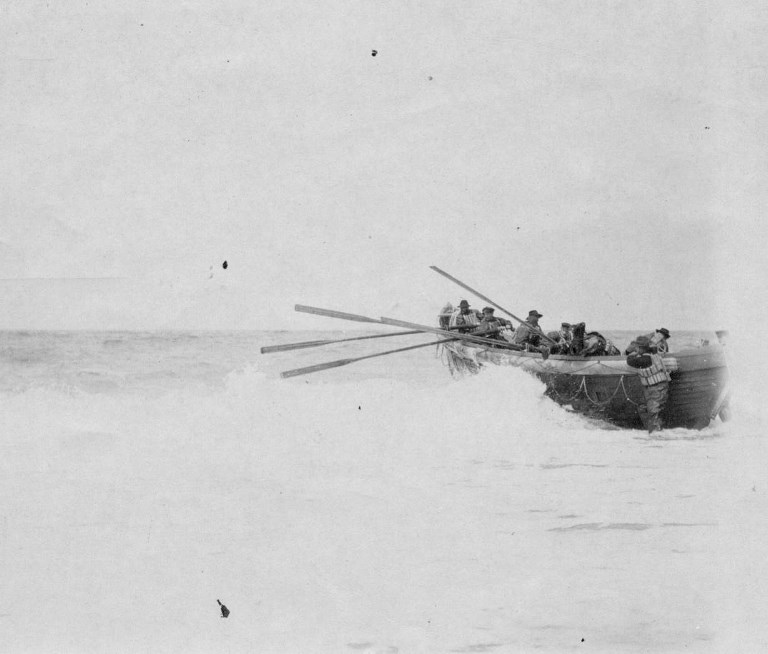 The mission was arduous. The boat took on water several times, but the crew succeeded in keeping it afloat. They returned with 14 members of crew.

Twelve men remained on the ship and the lifeboat had to set out once again. Now the seas were so high that the fishermen from their boats, with lifelines about their waists, had to help pull the lifeboat through the breakers.

The crew was saved by the lifeboat crew from Tuskær. But it was not to be the last time that the Edmond Gustave crossed their path. 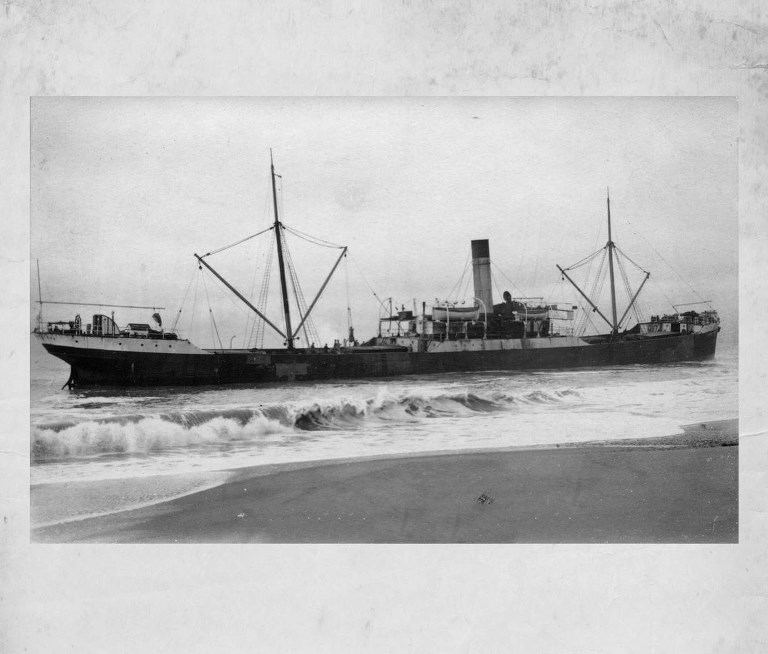 The next day, the salvage steam vessel Viking worked to drag Edmond Gustave free of the sand. The mission succeeded, but a few days later the seas rose and the ship once again ran aground. 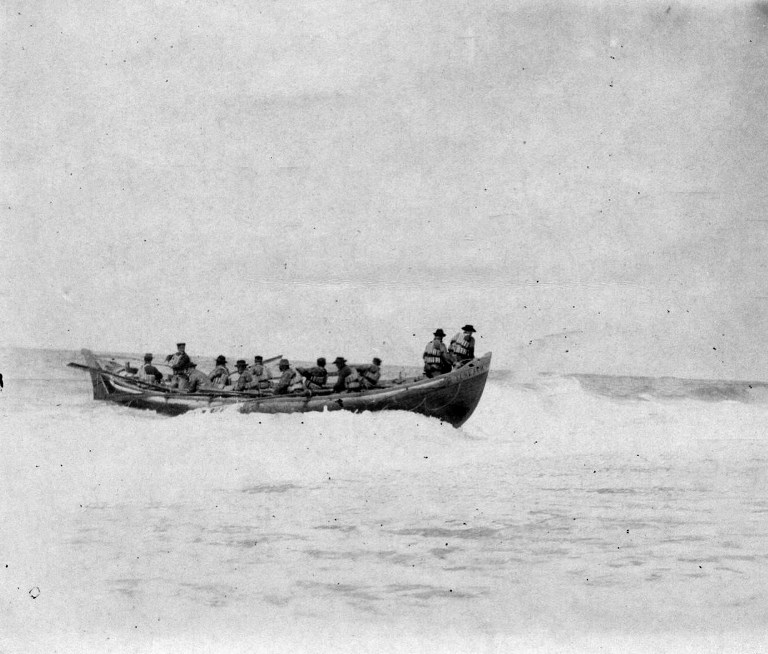 On board there were 40 salvagers, 5 crew members and 1 diver. Over the following days the lifeboat crew took turns at keeping watch from the beach, and those who wanted it were fetched ashore on the lifeboat. 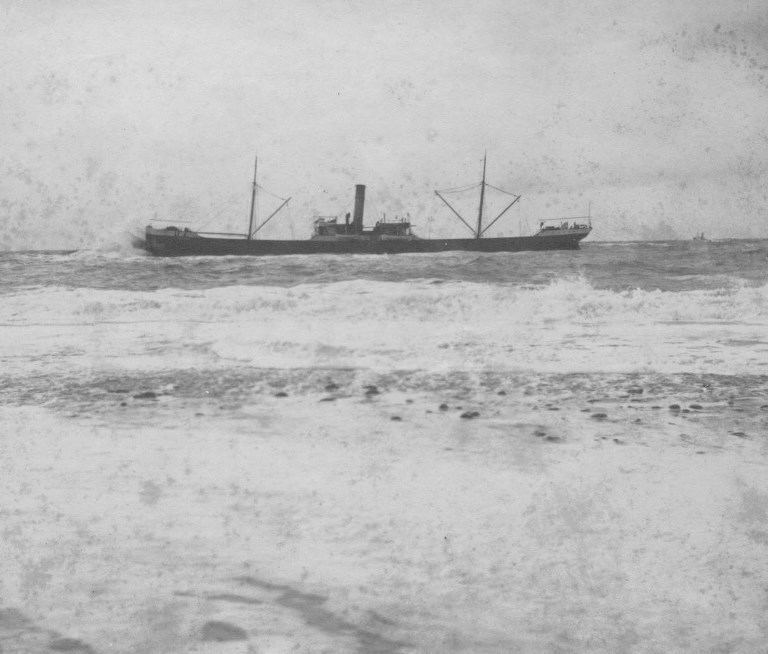 After 3 days the wind dropped and the salvage steam vessels Viking and Ægir were finally able to pull Edmond Gustave free of the coast. 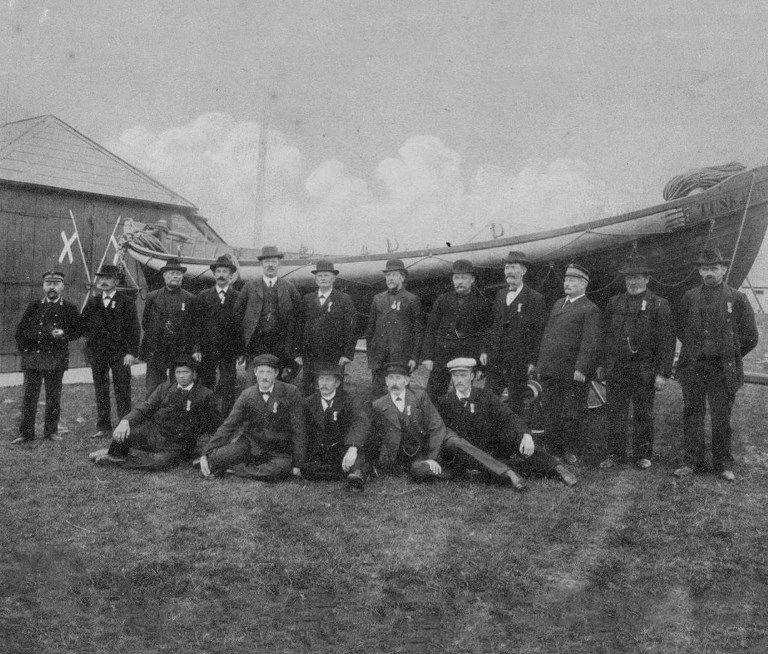 All in all, the lifeboat from Tuskær was launched 10 times during the stranding of the Edmond Gustave. The lifeboat crew was awarded the French Lifesaving Medal, First Class for their heroic action.

When the Edmond Gustave went aground, steam ships from the professional salvaging company, SVITZER, were quickly on the scene. The reason for this was that the local salvage guild had made a contract with SVITZER and informed the company whenever a stranding occurred in their area.

This contract ensured that SVITZER had access to salvage work and also maintained good co-operation with the local inhabitants. But the contract was also advantageous for the local salvage guilds. As ships were becoming bigger and heavier over time, the salvage guilds found it was getting impossible to undertake large-scale salvage operations without professional assistance. By working together with SVITZER, they could be guaranteed income from all salvage work. Payment for the co-operation was a fixed percentage of the salvage reward.

SVITZER's job was to investigate the ship, repair and refloat it. Salvage vessels, like the Ægir and Viking therefore had divers on board, whose job it was to seal any holes and mount towlines so the ship could be dragged free.

Edmond Gustave's crew were brought ashore by the men from Tuskær Rescue Station. Twelve-year-old Jens Kristian Ruby from Fjaltring was among the onlookers on the beach:

”A number of those who were rescued were catholic, and I was witness to something I'd never seen before. While the lifeboat was on its way in, many of them fell to their knees in prayer for those who were battling against the sea. They made the sign of the cross and prayed while kneeling on the beach. None of us expected any of them to survive. But by dint of their knowledge of the sea, their boat, and incredible seamanship, they managed it. The rescuers knew how to make the sea anchor work in their favour. As they came riding high on the last wave, we could clearly hear the skipper shout ‘row away!’. This meant that the men had to put their backs into it, and they did. The boat almost flew up onto the beach. Once again, a rescue mission had been completed, the likes of which had never previously been seen on the west coast of Jutland.

The dour folk of West Jutland don't usually give free reign to their feelings, but for a few moments, they forgot their usual reserve. Everyone rushed toward the lifeboat. They did not embrace those on board, but stood close by – wanting to congratulate them, perhaps. I don't know. I ran home to tell my mother the news. She didn't know how serious it was – or maybe she did? – but soon after, Ole Harboesgård came. He was a quiet sort of man, but this was too much for him. He couldn't help but fling his arms open wide and say, tears in his eyes: ”Anna – this was the greatest thing I've ever seen in my life.”

Among the men in the lifeboat were Jens Kristian Ruby’s father, oarsman Peder Chr. Jensen Ruby, and two of his uncles. His father's cousin, Peder Jensen Kjærsgård, was the skipper, and one of his cousins was responsible for the lifeboat's sea anchor.