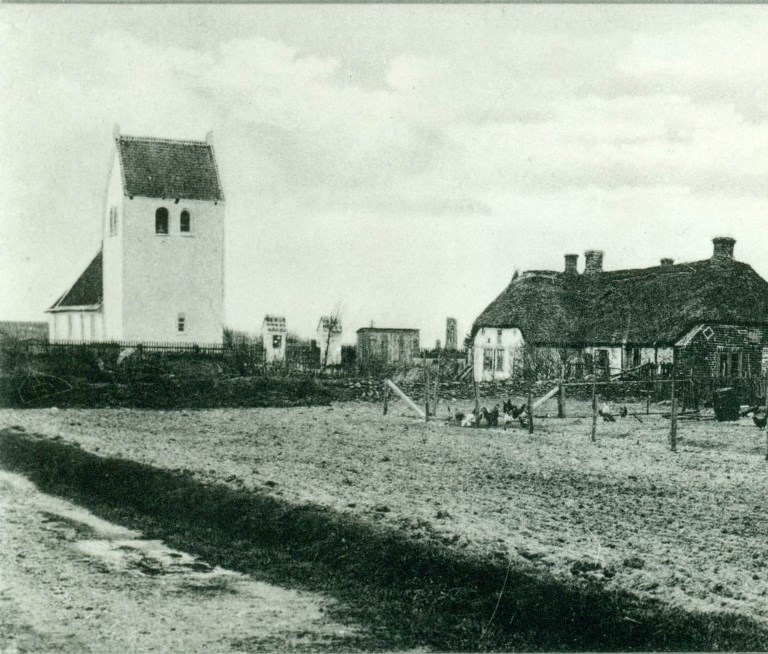 At 4 o'clock in the morning of 25th September 1868, the people of Harboøre were woken by loud crashing noises. Fishermen, who had previously served in the navy, recognised the sound of cannon fire. A military ship must have been positioned not far off the coast. 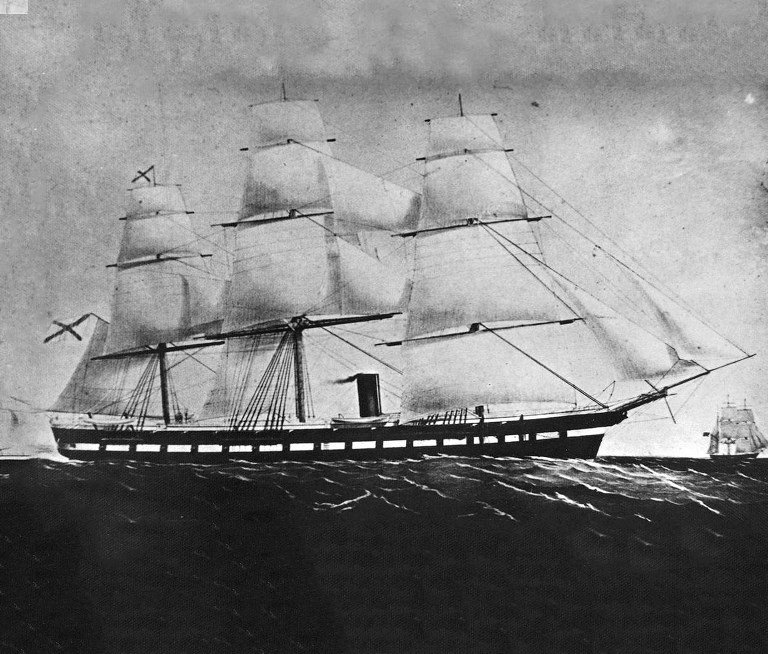 The ship was the Russian frigate, the Alexander Nevsky. Near gale force winds were blowing from west-northwest and seas were very high. The ship had run aground on the sandbanks at exactly 2:30 a.m. 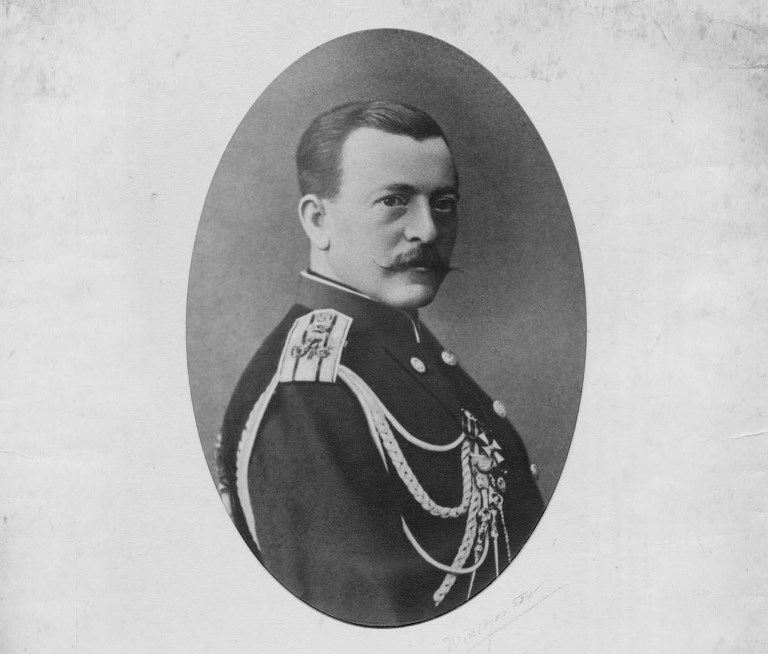 In order that the crew of 724 men could be saved, and to prevent the ship from being dragged out to deeper waters with a breached hull, Capt. Oscar von Kræmer had to act quickly. 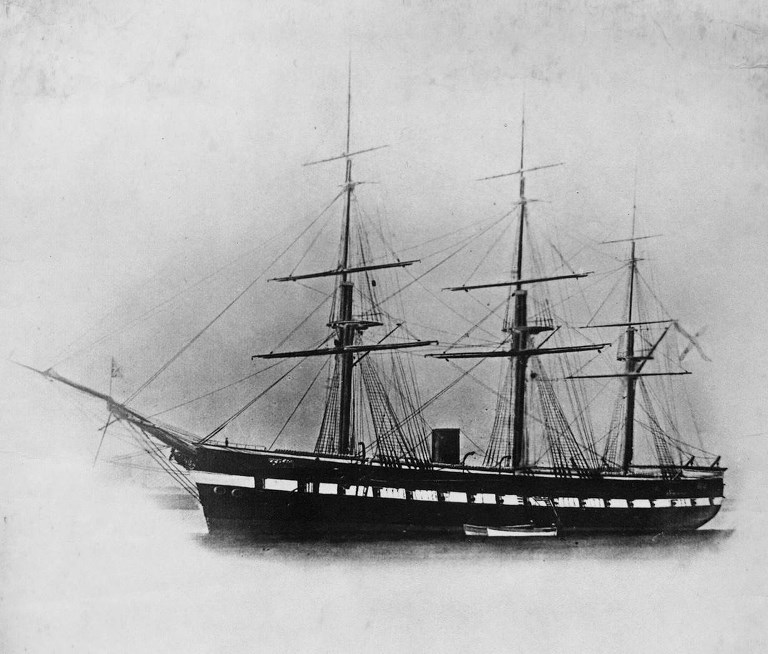 An anchor was dropped, the masts were chopped down and the port side cannons were thrown overboard so that the ship would tilt to starboard, with her decks facing the shore. 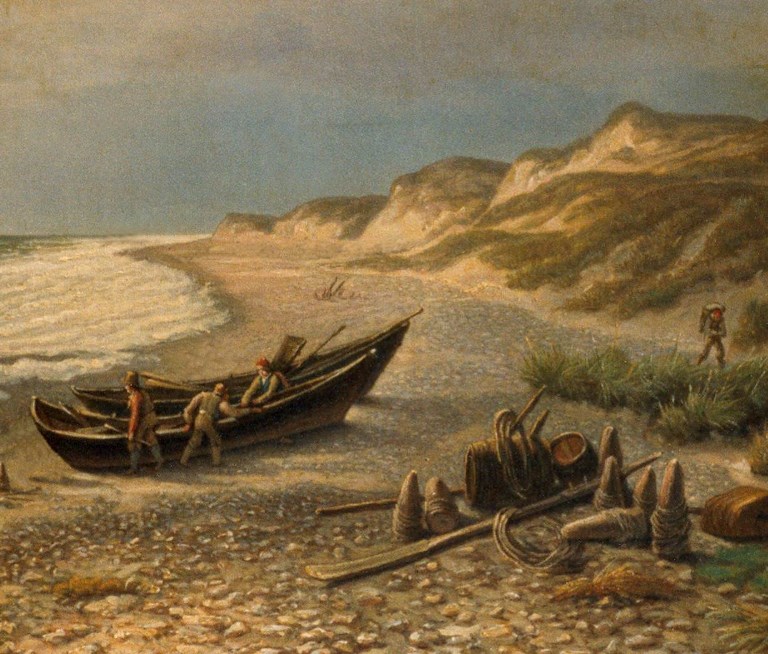 At dawn, the crew could see a low, sandy coast with a colossal sandbank. A fishing boat had been dragged high on to the beach, and they made out several houses and people. 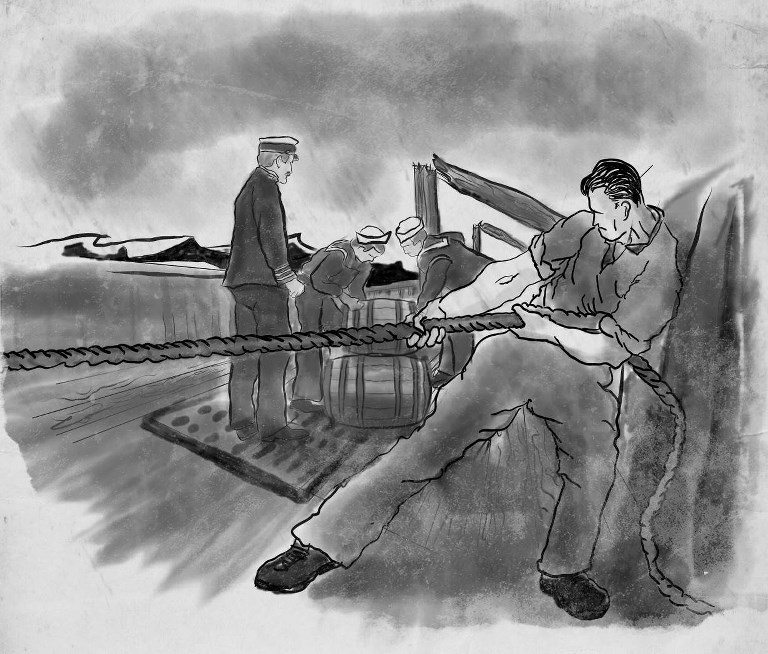 Capt. von Kræmer felt that the coast dwellers could offer only limited assistance. He therefore gave orders to the crew to build rafts and make ready the ship's admiral sloop and a yawl. 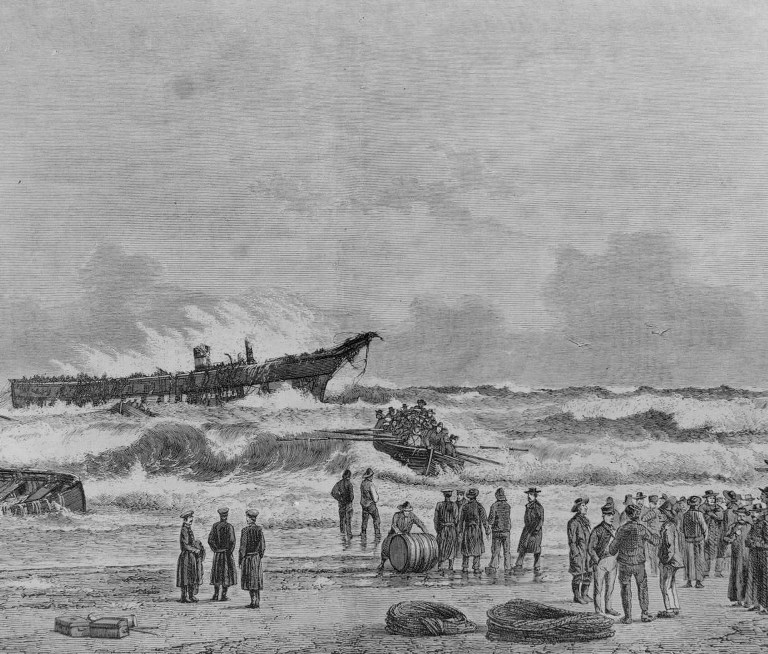 At 6 o'clock in the morning, the sloop was launched. On board were 16 men, led by Lt Osteletskij. They reached land, but in the process the boat was waterlogged and the oars were lost. 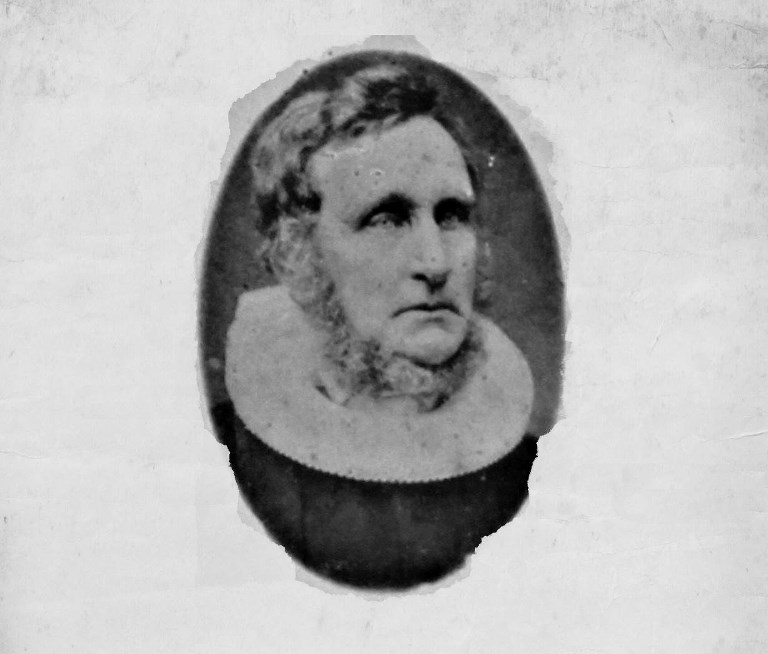 On the beach, Osteletskijj met Reverend Vaupel from Harboøre, who spoke some French and German. Osteletsky told him that the Tsar's son, Grand Duke Alexis, was on board the ship. 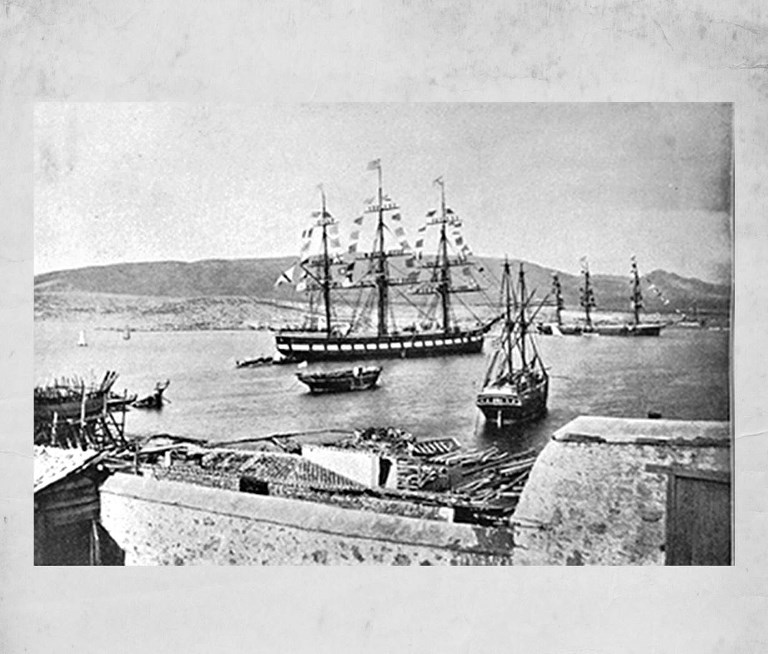 The frigate had been on exercise in the Mediterranean in order that Grand Duke Alexis could learn about navigation. On the return journey to St Petersburg, they drifted off course and were now stranded here. 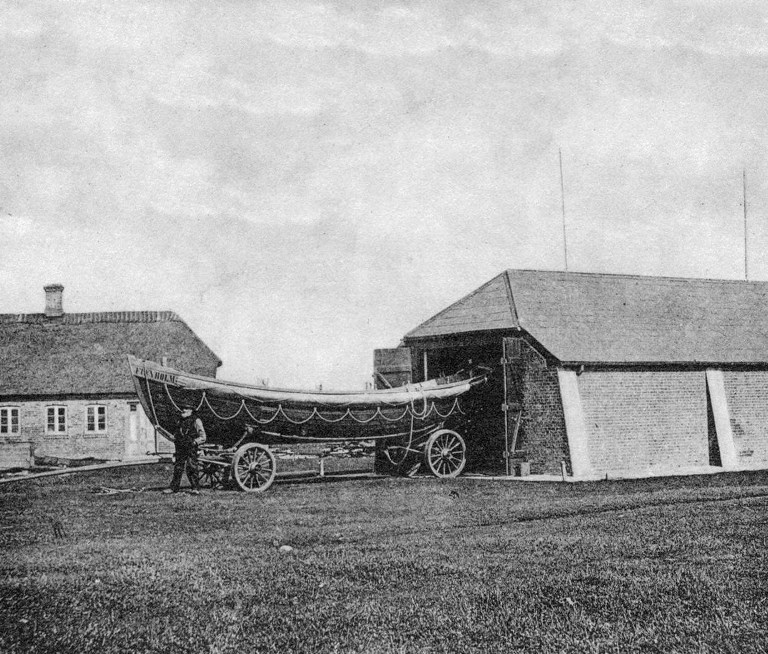 While Osteletskij was talking with Revd Vaupel, the team from Flyvholm rescue station were trying to make contact with the frigate. But this time, luck was not on their side. 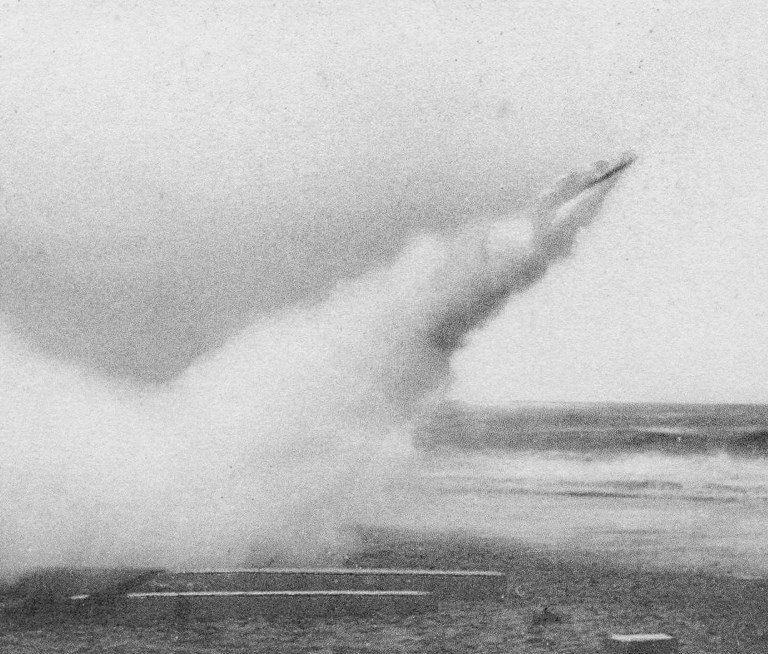 They battled until mid-day, attempting to launch the lifeboat and trying to fire rocket lines to reach the frigate, so that the bosun's chair could be sent out. 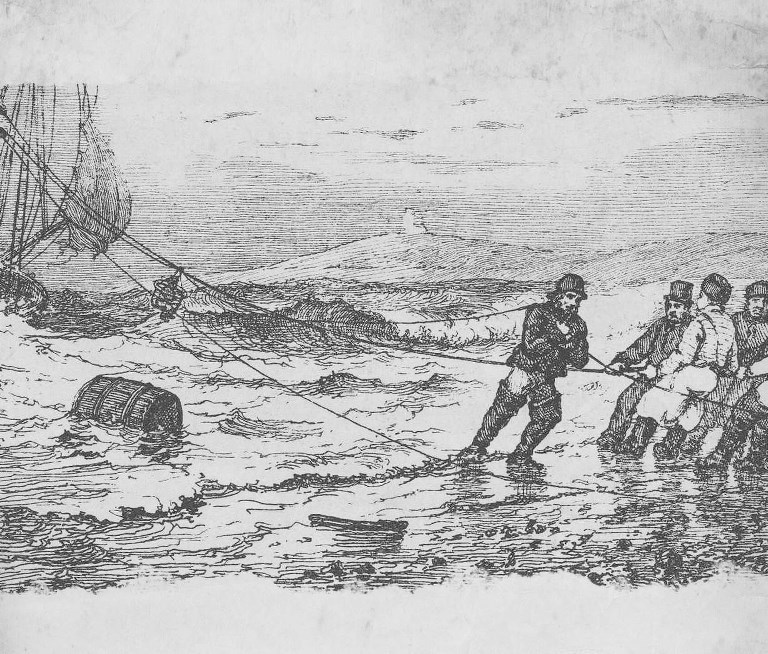 They succeeded with both things. However, after making its first trip, the lifeboat was so badly damaged that it could not be put to sea again. Shortly after, the hawser which was used with the bosun's chair snapped like a cotton thread. 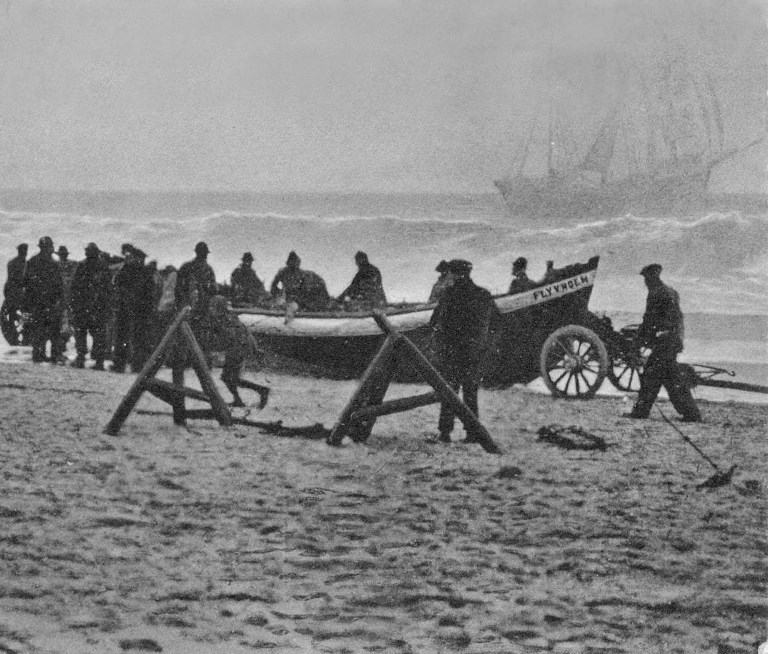 The time was now about 2 o'clock in the afternoon, and the rescue team's equipment was used up. But now the sea became quieter and the skies cleared; others could take over. 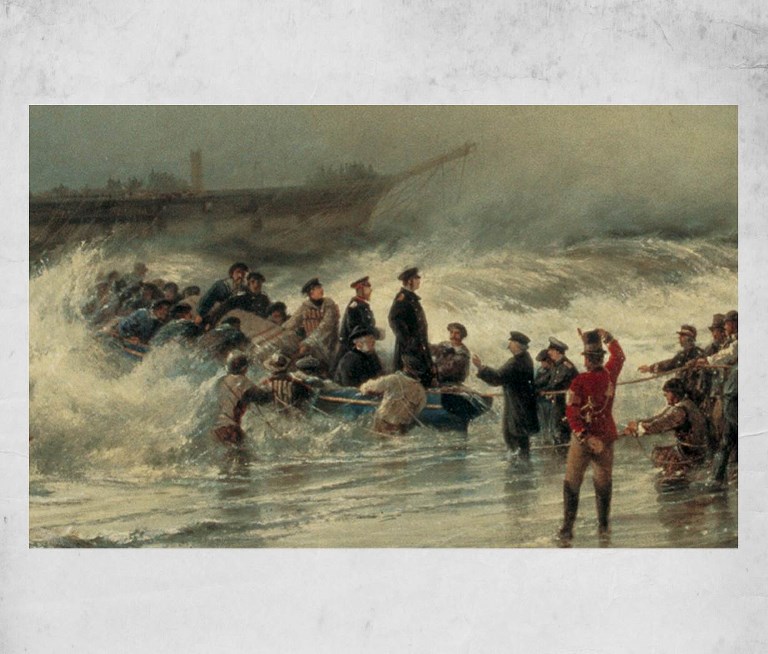 Lt Osteletskij came up with the idea of fastening the sloop to the lines which had been fired by rocket from the shore onto the ship. The sloop could now be used as a ferry, pulled back and forth by the Russian crew. 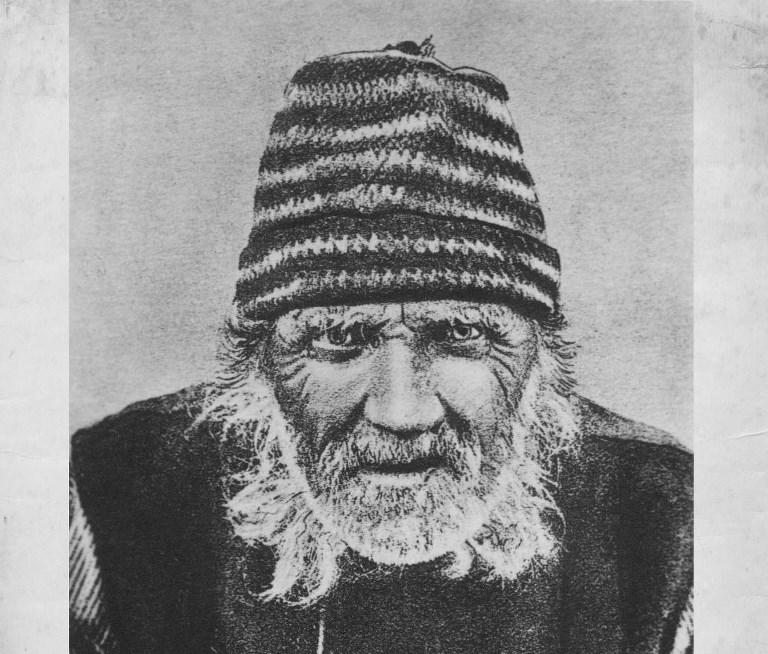 At the same time, fishermen began to launch their boats. The first to reach the frigate was a fishing boat from Harboøre, skippered by Peiter Hyld. Within half an hour, it had returned with eight sailors and an officer.

The sloop and the fishing boats sailed to and fro between the frigate and the shore. At half past six, the Grand Duke and the entire crew were safe ashore. They were all lodged in farms and houses on Harboøre.

On the beach Lt Osteletsky told Revd Vaupel that the Alexander Nevsky had lost its bearings in the North Sea. But how could this happen to the crew of one of the finest frigates of the Imperial Russian navy?

Captain Oscar von Kræmer had been given the great honour of captaincy of the ship on which Grand Duke Alexis would receive his naval training. At the same time, the grand duke's tutor, Admiral Possiet, was also on board, and this would lead to problems. Decisions regarding the navigation of the ship were the exclusive responsibility of the captain. Nonetheless, Admiral Possiet had countermanded him several times during the voyage around the Mediterranean Sea – and did so again in the North Sea.

On her way out of the English Channel, the Alexander Nevsky's position had been ascertained. The next day was misty, so it was not possible to measure the sun's declination at noon. Instead, it was necessary to use methods of dead reckoning, with the ship's speed and heading, to estimate her position. This was normal procedure and continued the following day.

In accordance with the pilot's guides, the ship was sailing towards Lindesnes lighthouse, on the southern tip of Norway. On the evening before the incident, Admiral Possiet wanted to change course and head for Hanstholm Fyr. Capt. Kræmer was called down to the admiral's cabin, where the suggestion was presented to him. After discussing a couple of possible problems, the captain was obliged to approve the admiral's orders.

Admiral Possiet, then, made the same mistake as countless other skippers on their way through the North Sea. He did not make allowances for the strong currents which occur when the wind suddenly changes. If a ship drifts off course, it could end up a long way away from the position which the crew has estimated. This is precisely what happened to the Alexander Nevsky.

For the local fishermen in the Harboøre Salvager's Guild, whose job it was to save every item of value, going on board the Alexander Nevsky was like entering something out of a fairy tale. Heavy mahogany furniture, gilded mirrors, panels and doors, as well as porcelain and crystal glasses, everything was lowered over the side to the fishing boats and rowed ashore.

The things that belonged to the ship, such as rigging, timbers and copper bolts, were sold directly on the beach, while the finer fittings were transported to Lemvig and stored in a warehouse. People could inspect the huge quantities of furniture, porcelain, table linen and even a fortepiano. The auction was advertised as far afield as Copenhagen, Hamburg and Flensborg, but many of the fine things were bought by the locals.

Traces of the Alexander Nevsky

The anchor of the Alexander Nevsky can be seen in the middle of Thyborøn harbour.