The Haurvig Rescue Station was established in 1860 as a very modest rocket station, and its building still exists immediately west of the Abeline’s Farm museum. A separate building was added for equipment in 1882. In 1887, the station was expanded with a larger building and a newly built lifeboat from the Naval Dockyards in Copenhagen. In 1933, like Sønder Lyngvig Rescue Station, the station was closed because its operations were transferred to a new station with a motorised lifeboat in Hvide Sande. Initially, it was not the intention to completely get rid of Haurvig, which until 1939 had served as a rocket depot for Hvide Sande Rescue Station.

The activity was never as intense in Haurvig as it was in many other places on the coast, where several of the small lifeboat stations rescued several hundred sailors in the decades around 1900. Haurvig rescued 64 shipwrecked people across 15 operations, all of them brought ashore using the rocket apparatus.

The Haurvig Rescue Station is now part of the museum experience at Abeline’s Farm. In the museum's opening hours, there is access to the rescue station building, which today houses a replica of the lifeboat. You arrive in the summer sunshine. You are on holiday. But with a little imagination, it is not difficult to imagine the boat in use during a stormy November night, 100 years ago. 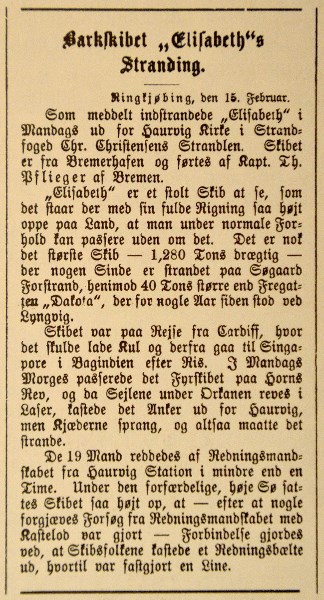 February 12, 1894 saw the biggest shipwreck in Haurvig Rescue Station's history. Only a few days earlier, the barque 'Elisabeth Rickmers' of Bremerhaven had departed from its home port with 600 tonnes of sand as ballast. It was not enough. A powerful storm arose and the ship ended up right up on the beach, where the rescue of its 19 sailors proceeded without difficulty.

The local shore officer Christen Christensen wrote in his diary:

February 12: "We put 19 males (the ship crew) into lodging, and all were given dry clothes. Rescue apparatus were deployed and people were thereby rescued from the water. A severe wake up call for the 19 Germans. All is well."

February 13: "Had all the sailors round for dinner. Authorities came here and ate dinner. [...] At night, a trip with rescue apparatus for a ship whose lantern was visible, but it did not land."

The rocket apparatus in use

In 1851, the Rescue Brigade’s founder and first director Christopher Berent Claudi sent an "Instruction in the Use of Rescue Rockets for the Rescue of Shipwrecked Persons" to print. You get the impression that it is more complicated than setting off regular fireworks:

"When arriving at the site of the stranding, if possible, one should put up the rocket support in the lee of the ship, so as to ensure that one fires directly into the wind. The support is set up so that the rocket protrudes at an angle of approximately 40 degrees when the weather is not too rough, but if the storm is strong, or you cannot avoid the cross wind, then the rocket should not be launched at an elevation greater than approximately 30 degrees. [...]
When ready to fire, a rocket should be procured, and with the sailcloth patch that covers its bottom cut away, a stick is pulled through the eyes of the rocket holster, and mounted with 2 tacks, one through each eye. Now place the rocket gently in the rail. Approximately three fathoms of the line’s front end should be made wet and introduced from below through the hole in the bottom end of the rocket stock, whereafter it, by the aid of a bowline, should be fastened around the hole in the top end of the stock. The line should be placed tightly along the back of the stock, and kept clear all the way to the box. Now, a percussions safety fuse should be procured and its thickest end introduced into the fuse hole in such a manner that the thin end rests between the jaws positioned in the lock. Now tighten the lock. Close the copper capsule over it and carefully take the firing line and take approximately 10 steps sideways, now firing can happen in the designated place by pulling the line. [...] If the line was successfully thrown to the stranded ship, the crew aboard may be brought ashore using a heftier hawser, a breeches buoy, etc.”

...Now consider that this must all be carried out in the dark and cold, through storm, rain and sleet. Desperate human beings are fighting for their lives a few hundred metres away, and they can only be saved if the rocket is fired perfectly...