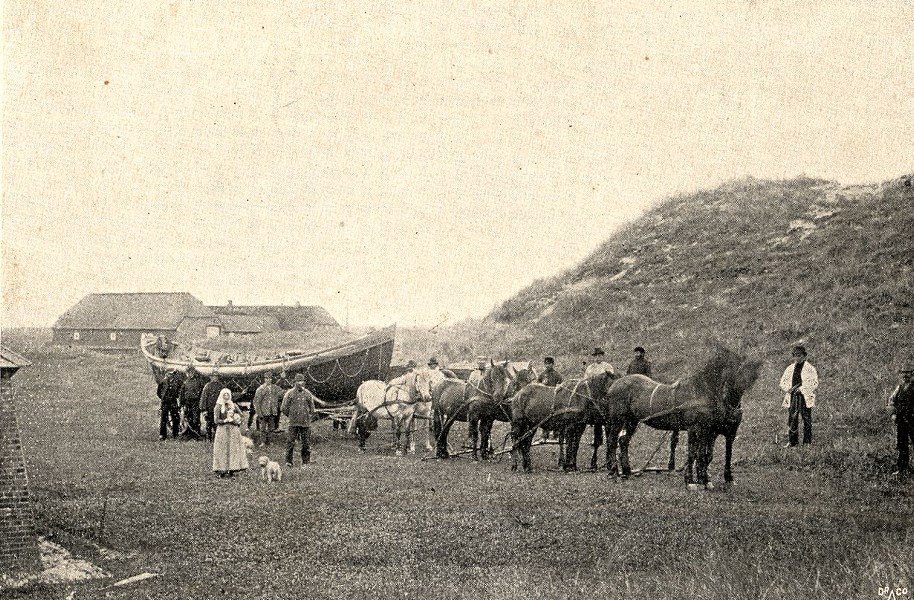 Søndervig Rescue Station was opened in 1857. For the first 30 years, it was only a rocket station, but in 1887, it was expanded to also have a lifeboat, built at the naval dockyards in Copenhagen. At the same time, a building was erected that would house both the rocket apparatus and the boat. In 1946, the rescue rowing boat was taken out of service, but the station remained active as a rocket station until 1975.

The tallies show that Søndervig Rescue Station saved far more lives using the rocket apparatus than the boat. Of the 80 rescued sailors, only one was rescued by boat. 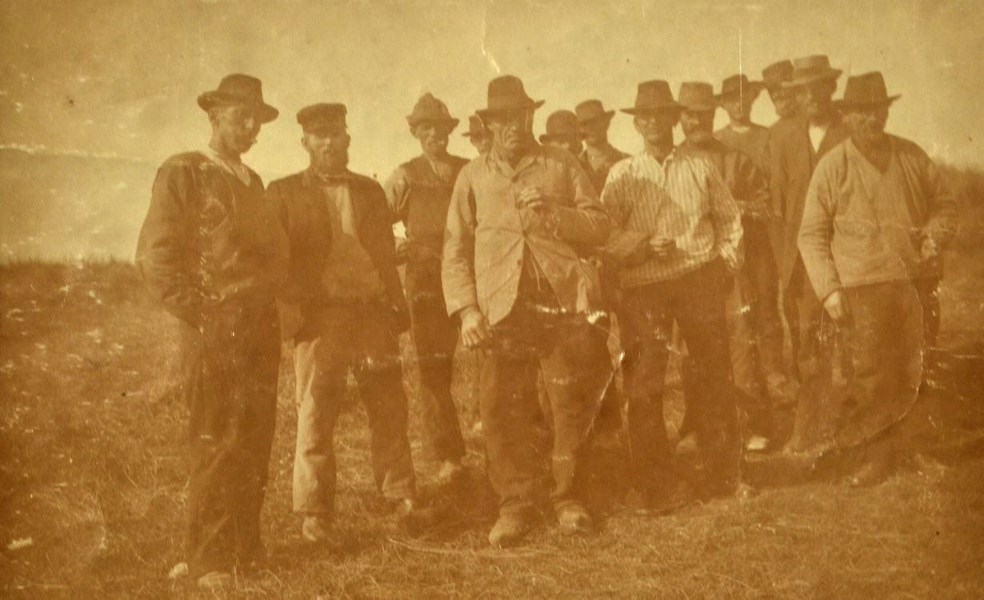 Søndervig Rescue Station was a place for long and faithful service. In 1927, the station was only on its third attendant.

The first, Shore Officer C.C. Pedersen held the post until 1877, which was "only" 20 years. When he gave up his post, the station operator, Anders Hansen, was promoted to attendant. He held the position until 1901 – 24 years. The "new" man in office, Shore Officer Christian Lodberg, had been the attendant for 26 years in 1927.

The photo shows a group of former rescuers from the station lining up. 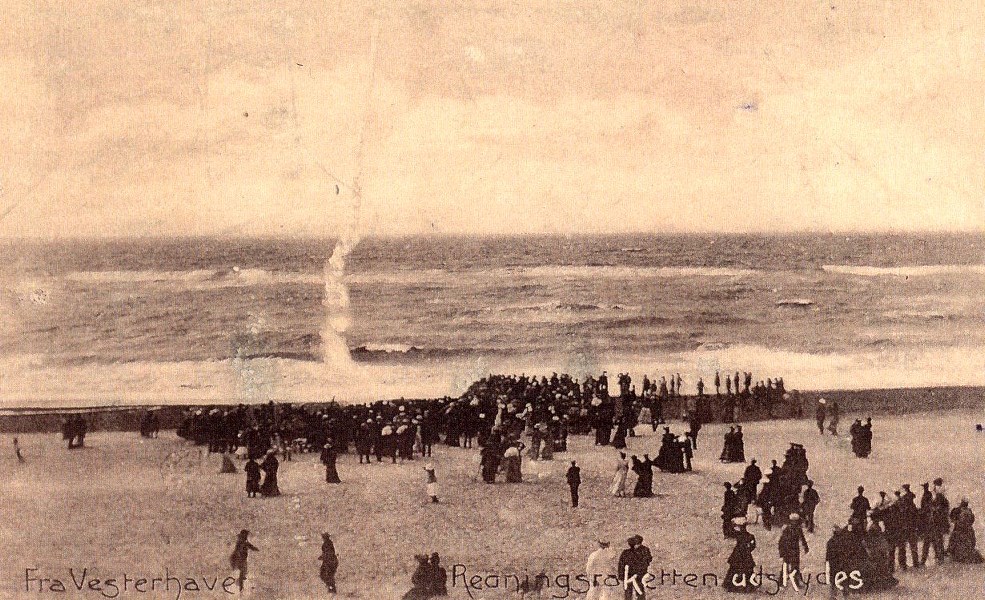 The barque 'Aeolus' of Hamburg

In September 1899, the barque 'Aeolus' was on its way from Drammen in Norway to Itzehoe in Germany with a cargo of wood.

Was it foolish pride, naming the ship after the ancient god of winds? Only the gods know! In any case, the 'Aeolus' was stranded just south of Søndervig on September 23 in gales and rough seas. The ship was stuck about 250 metres from shore.

The situation was critical. The crew at Søndervig Rescue Station shot two rockets towards the ship, but the crew did not dare to leave the cabin. A third rocket landed precisely above the cabin, and two men were hauled ashore via the line. The great ship then splintered, and six men had to cling to debris or parts of the cargo. Sønder Lyngvig Rescue Station had also arrived with their rocket apparatus, and the two teams managed to bring all living sailors ashore using lines from the rockets. Only two men, who had already been washed overboard during the stranding hours earlier, drowned.

The use of the rescue equipment was somewhat different to what the sailors of the 'Aeolus' were familiar with. The line was used to pull a heavier hawser to the ship, on which the breeches buoy should be fitted. Using the buoy, the sailors could be brought ashore dry. Whether it was due to the great distance, the height of the waves or a lack of knowledge of the equipment, the eight surviving sailors were lucky with the timing of the stranding. Had the sea been wintry cold, it would have ended completely differently.

When the Søndervig Rescue Station building was erected in 1887, it joined a few dune farms in the area. Apart from them, the region was all deserted dunes, beach and marsh reeds. Almost. In fact, a fledgling tourism business was already taking root. Enterprising attorney and credit union founder Ephraim Magdalus Møller had gathered a group of local money men and, in 1884, opened the seaside hotel in Søndervig. Møller also built Søndervig’s first holiday home for himself.

Tourism soon grew, and Søndervig Rescue Station was joined by a whole host of small, makeshift holiday homes. Many of the holiday homes in the rest of Søndervig were beautiful little stone-built summer residences for the West Jutland upper class, while the rescue station’s somewhat secluded location meant that the first holiday homes there were an expression of the art of possibilities. 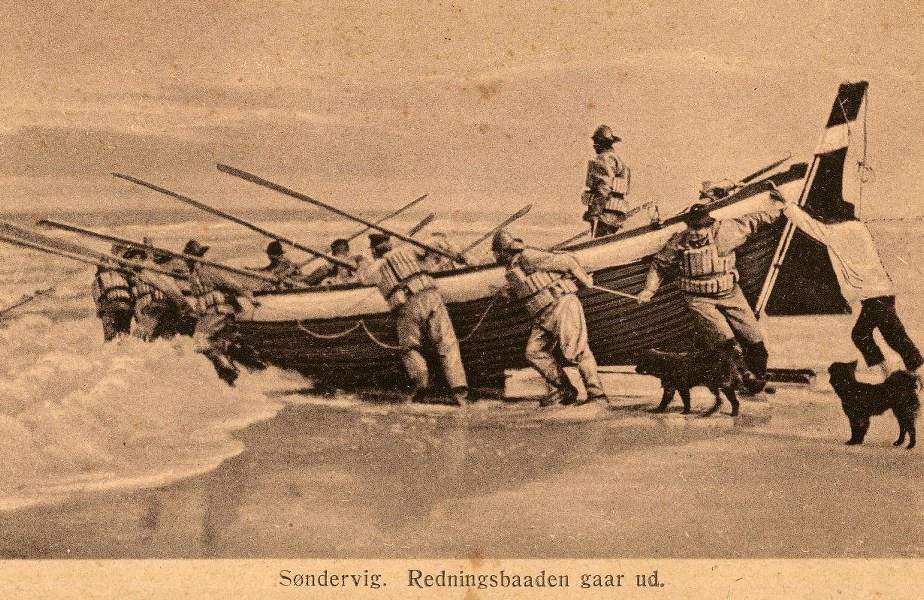 The rescue station crews had to be ready for a little bit of everything, but years – many years, in fact – could pass between dramatic shipwrecks. Therefore, training had to be done in the use of both lifeboats and rocket apparatus.

Although the wrecks usually occurred during the storm season from October until March, this did not prevent rescue teams from performing their training exercises under milder conditions in the summer. The rescue stations therefore came to play a brand new and unintentional role in emerging west coast tourism.

In the 1920s and 1930s, as more and more tourists found their way to Søndervig, the annual lifeboat training exercise became a great attraction, and numerous postcards with elements from the exercises were released.

The lifeboat as a silver spoon

It even went so far as the lifeboat being used as a motif on a time-honoured souvenir in the late 1930s. This beautifully-styled toddy spoon with the text "SØNDERVIG" has the lifeboat as its motif.