The North Jutland Rescue Service was established by law in 1852. The law was passed as the first Danish law which aimed at saving the lives of those imperilled at sea while they were still on board. 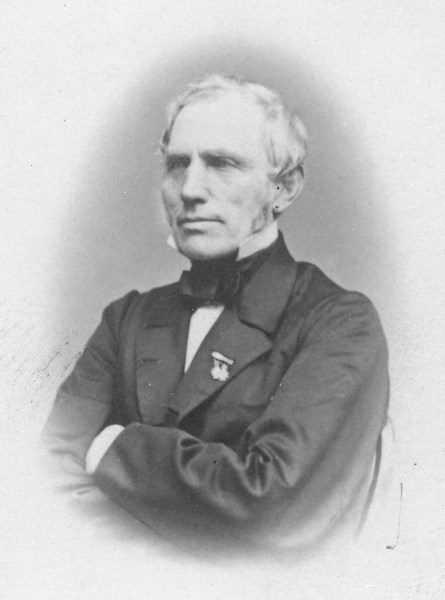 A central figure in the establishing of the North Jutland Rescue Service was the strandings officer Christopher Berent Claudi (1799-1880). Claudi grew up in Lemvig. At the age of 25 he was employed as a coast bailiff, and a few years later he was authorised to translate English and German.

In his line of work Claudi came to know just how few means were available for coast-dwellers to help those stricken sailors whose ship was driven onto land. He therefore travelled to England at his own expense to learn how the rescue service operated there.

Claudi's work for the rescue service was one of the reasons that King Christian VIII authorised a donation of 5000 rix-dollar in 1847 for the procurement of rocket launchers, swimming belts, a rescue boat, drawings, models and a mortar. In the same year two experimental rescue stations were established near to Claudi's home at Ferring Sø: Tuskær near Fjaltring and Flyvholm on Harboøre.

In 1852 C.B. Claudi was appointed as Director of the North Jutland Rescue Service. At the time there were 19 rescue stations along the west coast of Jutland, stretching from Skagen in the north as far south as Blåvand. 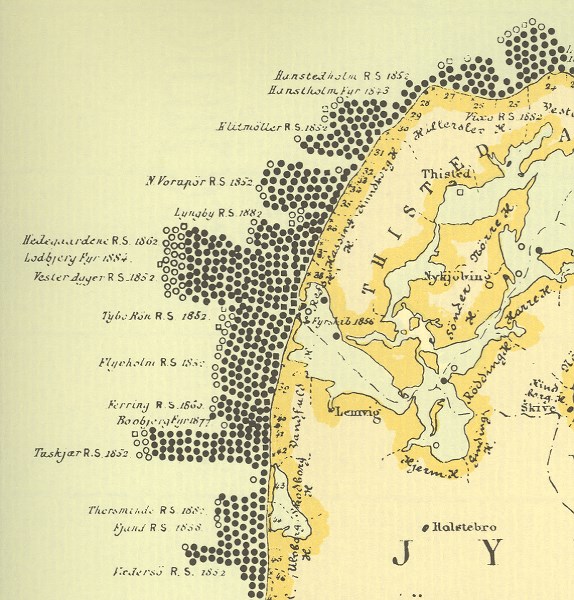 An excerpt of J.S. Hohlenberg's map of the strandings which occurred along the coast of Denmark between 1st January 1858 and 31st December 1882. The black marks indicate total wrecks, while the white marks show sailing ships which ran aground. 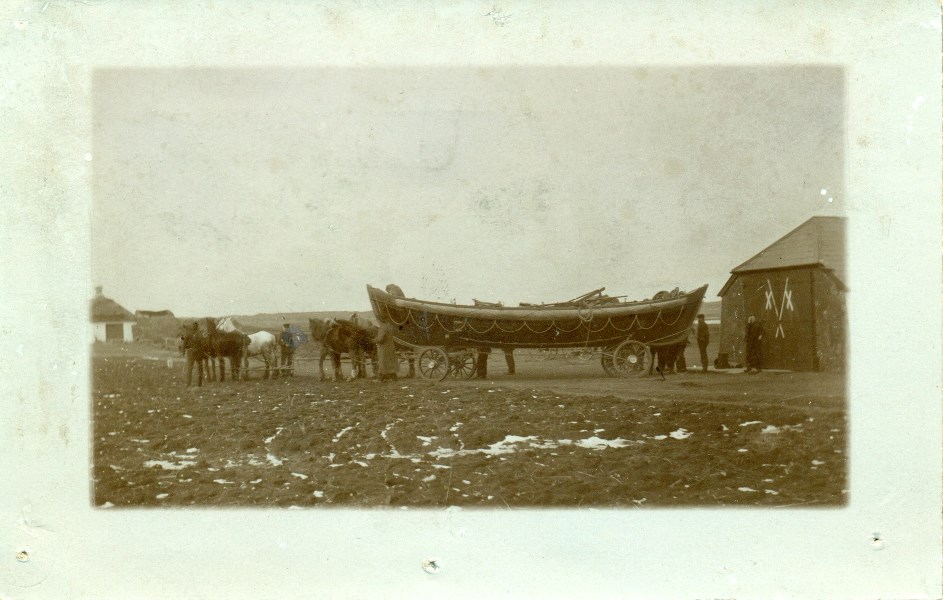 Gradually, as the North Jutland Rescue Service was built up, the rescue stations provided a well-organised safety net. The stations were situated according to the requirements and were manned by local inhabitants.

There were two types of rescue station: boat stations and rocket stations. Where there were insufficient people in the area to crew a lifeboat, a rocket station was established instead. Otherwise, it was the weather conditions and the distance from ship to shore which determined whether the rescuers used rockets and bosun's chair or launched the lifeboat. 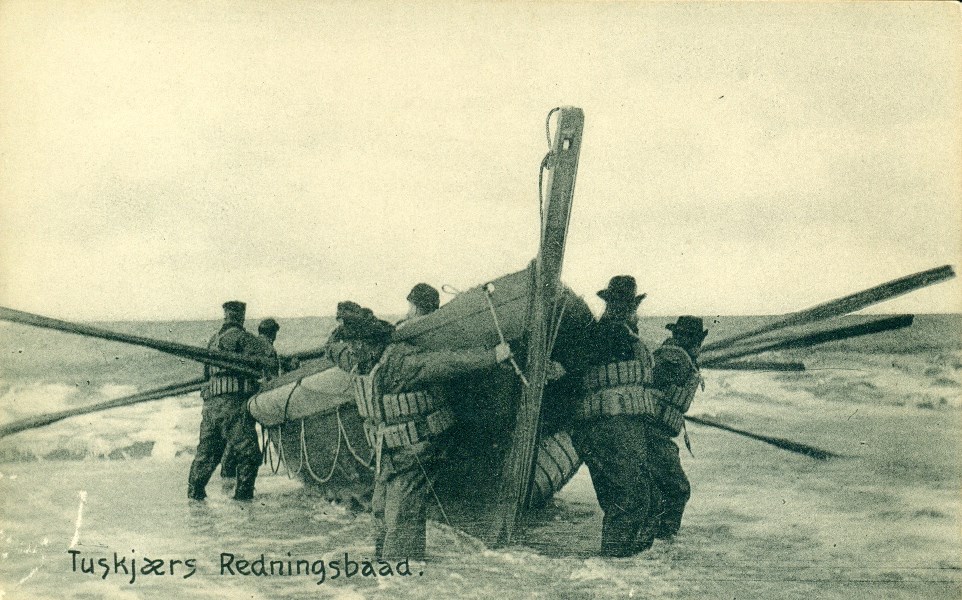 The recue service lifeboats were built by the naval dockyards in Copenhagen.

The boats were equipped with airtight compartments made of tinned copper plating, which ensured buoyancy and made the boats unsinkable. Eight self-bailing sluices in the bilge ensured that water was removed from the boat again. A lifeboat weighed about 850 kg when empty and about 1,750 kg when fully equipped.

It was an honour to serve in the rescue service, but not without danger. To be a member of the lifeboat crew you had to be tough and resilient.

Most strandings occurred in the autumn and winter. Rescue missions could last for hours, or several days, with clothes becoming constantly drenched and the men suffering from exposure. On top of this were the boat rescue missions themselves. To row out beyond the sandbanks to a ship and bring sailors in distress safely back to land sometimes meant putting your own life at risk. In 1897 the whole crew from the neighbouring station at Liløre perished during a rescue attempt. 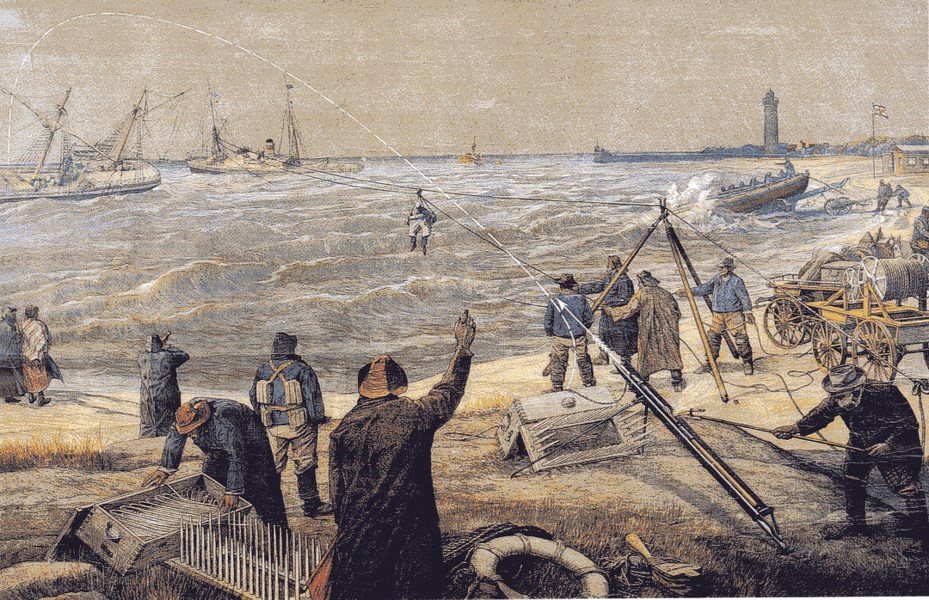 The rocket equipment was needed to make a connection between the rescue team on land and the crew of the stricken ship.

The first thing the rescue team did when they arrived on scene was to position a rocket launcher on the beach. The launcher would be positioned as close as possible to the water. The crate holding the rocket lines would be placed further back, so that it did not get wet.

In the rescue rocket's launching tube there was a steel wire to which the rocket line was tied. The rocket would then be placed on an inclined ramp, which could be adjusted according to the distance between the ship and shore.

In order that the crew could get hold of the line, it was best if the rocket crossed the ship at right angles so that the line was draped across the deck midship.

Along with the tail block, there was a board with instructions telling the crew to secure the tail block as high as possible on the ship. To make sure that they understood, the instruction boards were available in different languages.

When the tail block was securely fastened to the ship, the rescue team would splice their end of the heaving line to the thick rescue hawser. By pulling on the other end, it was possible to haul the rescue hawser out to the ship. The rescue hawser could reach up to 400 metres and was kept taut between the ship and a support frame on the beach. 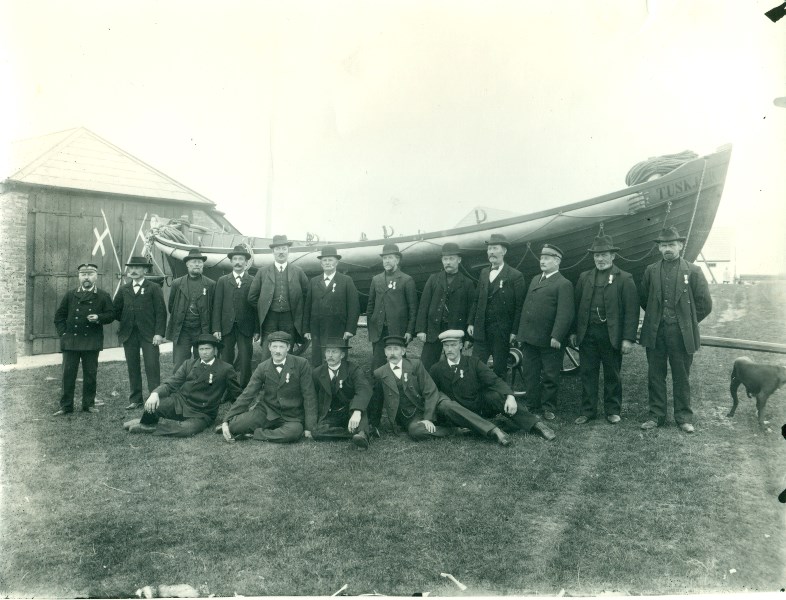 Each boat station had a permanent team. The station manager was responsible for the equipment and the rescue missions and reported to the Director of the Rescue Service.

The primary task of the crewmen was to row the lifeboat. They elected one of their own to be the skipper of the boat, who had unquestioned command during the rescue missions.

The station team were obliged to be available at all times. If a member of the crew was away from the parish for more than 24 hours, it was necessary to find a substitute.

The boat crew were usually fishermen and therefore were used to setting out to sea from the shoreline. They were paid a fixed monthly salary, with extra pay for exercises and rescue missions. For particularly exhausting missions there was an extra supplement. Many of the rescuers were also awarded medals for their actions. 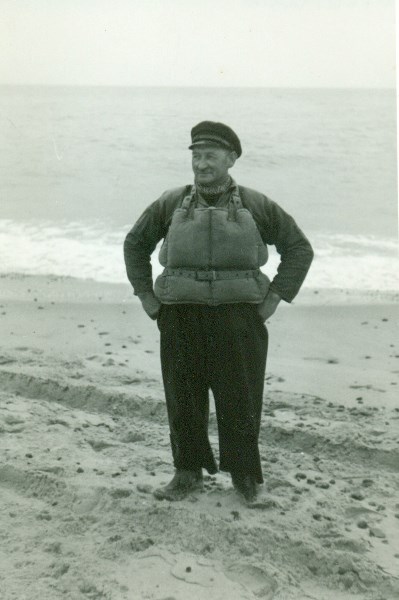 The station crews were continuously given training exercises, where they were taught to handle the boat and rocket equipment. The manager also had a duty to ensure that the boat crew wore lifebelts made of cork. These were replaced in the 1920s by life jackets made with kapok, which had improved buoyancy and were more comfortable to wear.